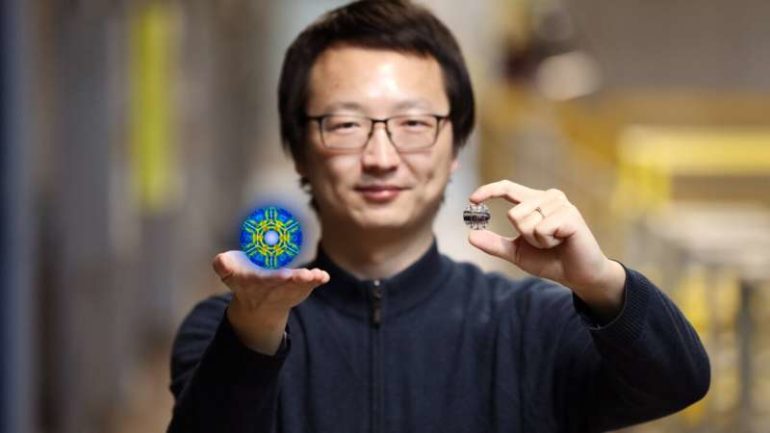 Advanced materials with more novel properties are almost always developed by adding more elements to the list of ingredients. But quantum research suggests some simpler materials might already have advanced properties that scientists just couldn’t see, until now.

Researchers from Georgia Tech and the University of Tennessee–Knoxville uncovered hidden and unexpected quantum behavior in a rather simple iron-iodide material (FeI2) that was discovered almost a century ago. The new research insights into the material’s behavior were enabled using a combination of neutron scattering experiments and theoretical physics calculations at the Department of Energy’s (DOE’s) Oak Ridge National Laboratory (ORNL).

The team’s findings—published in the journal Nature Physics—solves a 40-year-old puzzle about the material’s mysterious behavior and could be used as a map to unlock a treasure trove of quantum phenomena in other materials.

“Our discovery was driven in large part by curiosity,” said Xiaojian Bai, the paper’s first author. Bai earned his Ph.D. at Georgia Tech and works as a postdoctoral researcher at ORNL, where he uses neutrons to study magnetic materials. “I came across this iron-iodide material in 2019 as part of my Ph.D. thesis project. I was trying to find compounds with a magnetic triangular lattice arrangement that exhibits what’s called ‘frustrated magnetism.'”

In common magnets, like refrigerator magnets, the material’s electrons are arranged in a line like arrows that either all point in the same direction—up or down—or they alternate between up and down. The directions the electrons point are called ‘spins.’ But in more complex materials like iron-iodide, the electrons are arranged in a triangular grid, wherein the magnetic forces between the three magnetic moments are conflicted and are unsure of which direction to point—hence, ‘frustrated magnetism.’

“As I was reading through all the literature, I noticed this compound, iron-iodide, that was discovered in 1929 and was studied somewhat intensively back in the 1970s and 80s,” said Bai. “At the time, they saw some peculiarity, or unconventional modes of behavior, but they didn’t really have the resources to fully understand why they were seeing it. So, we knew there was something unsolved that was strange and interesting, and compared to forty years ago, we have much more powerful experimental tools available, so we decided to revisit this problem and hoped to provide some new insights.”

Quantum materials are often described as systems that exhibit exotic behavior and disobey classical laws of physics—like a solid material that behaves like a liquid, with particles that move like water and refuse to freeze or stop their motion even at freezing temperatures. Understanding how those exotic phenomena work, or their underlying mechanisms, is the key to advancing electronics and developing other next-generation technologies.

“In quantum materials, two things are of great interest: phases of matter such as liquids, solids, and gases, and excitations of those phases, like soundwaves. Similarly, spin waves are excitations of a magnetic solid material,” said Martin Mourigal, professor of physics at Georgia Tech. “For a long time, our quest in quantum materials has been to find exotic phases, but the question we asked ourselves in this research is ‘Maybe the phase itself is not apparently exotic, but what if its excitations are?’ And indeed that’s what we found.”

Neutrons are ideal probes to study magnetism because they themselves act like microscopic magnets and can be used to interact with and excite other magnetic particles without compromising a material’s atomic structure.

Bai was introduced to neutrons when he was a graduate student of Mourigal’s at Georgia Tech. Mourigal has been a frequent neutron scattering user at ORNL’s High Flux Isotope Reactor (HFIR) and Spallation Neutron Source (SNS) for several years, using the DOE Office of Science user facilities to study a wide range of quantum materials and their various and bizarre behaviors.

When Bai and Mourigal exposed the iron-iodide material to a beam of neutrons, they expected to see one particular excitation or band of energy associated with a magnetic moment from a single electron; but instead they saw not one, but two different quantum fluctuations emanating simultaneously.

“Neutrons allowed us to see this hidden fluctuation very clearly and we could measure its entire excitation spectrum, but we still didn’t understand why we were seeing such abnormal behavior in an apparently classical phase,” said Bai.

With help from Batista and his group, the team was able to mathematically model the behavior of the mysterious quantum fluctuation and, after performing additional neutron experiments using the CORELLI and SEQUOIA instruments at SNS, they were able to identify the mechanism that was causing it to appear.

“What theory predicted and what we were able to confirm with neutrons, is that this exotic fluctuation happens when the spin direction between two electrons is flipped, and their magnetic moments tilt in opposite directions,” Batista said. “When neutrons interact with the spins of the electrons, the spins rotate in synchronicity along a certain direction in space. This choreography triggered by neutron scattering creates a spin wave.”

He explained that in different materials, electronic spins can take on many different orientations and spin choreographies that create different kinds of spin waves. In quantum mechanics, this concept is known as “wave-particle duality,” wherein the new waves are regarded as new particles and are typically hidden to neutron scattering under normal conditions.

“In a sense, we’re looking for dark particles,” Batista added. “We can’t see them, but we know they’re there because we can see their effects, or the interactions they’re having with the particles that we can see.”

“In quantum mechanics, there’s no distinction between waves and particles. We understand the particle’s behavior based on the wavelength, and that’s what neutrons allow us to measure,” said Bai.

Mourigal likened the way neutrons detect particles to waves breaking around rocks on the ocean’s surface.

“In still water we can’t see the rocks at the bottom of the ocean until a wave moves over it,” Mourigal said. “It was only by creating as many waves as possible with neutrons that, through Cristian’s theory, Xiaojian was able to identify the rocks, or in this case, the interactions that make the hidden fluctuation visible.

Since their discovery, the team has used those insights to develop and test predictions into a broader set of materials they expect will yield more promising results.

“As we introduce more ingredients into a material, we also increase potential problems such as disorder and heterogeneities. If we really want to understand and create clean quantum mechanical systems based on materials, going back to these simple systems might be more important than we thought,” said Mourigal.

“So that solves the 40-year-old puzzle of the mysterious excitation in iron-iodide,” said Bai. “We have the advantage today in the advancements of large-scale neutron facilities like SNS that allow us to basically probe the entire energy and momentum space of a material to see what’s happening with these exotic excitations.

“Now that we understand how this exotic behavior works in a relatively simple material, we can imagine what we could find in more complicated ones. This new understanding has motivated us and hopefully it will motivate the scientific community to investigate more of these kinds of materials which will surely lead to more interesting physics.”


Citation:
Neutrons piece together 40-year puzzle behind iron-iodide’s mysterious magnetism (2021, May 20)
retrieved 20 May 2021
from https://phys.org/news/2021-05-neutrons-piece-year-puzzle-iron-iodide.html