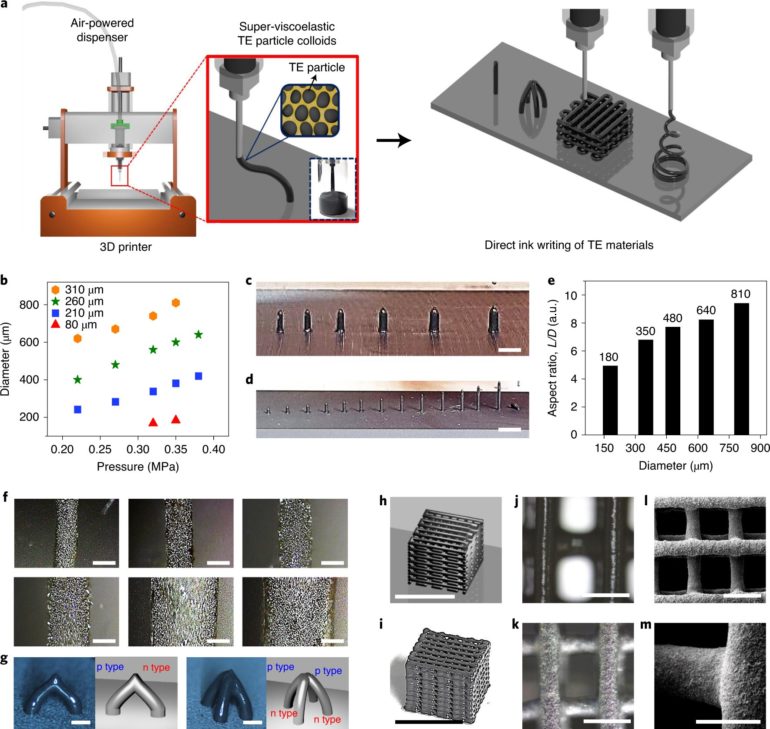 A team of researchers working at the Ulsan National Institute of Science and Technology has created a new type of ink that can be used to print tiny 3D generators. In their paper published in the journal Nature Electronics, the group describes developing their new ink.

Thermoelectric devices are able to generate electricity by taking advantage of heat moving within a material from a part that is warmer to a part that is cooler. Scientists have been looking for ways to create thermoelectric devices to power things like wireless sensors. In theory, they could be powered by taking advantage of natural rapid temperature changes, such as when morning light suddenly begins shining on a cool, dark surface.

As the researchers note, micro-thermoelectric devices are a means of harvesting electricity from thermal systems; making them commercially viable, however, has been problematic. Existing techniques, they suggest, have been costly, and most have been in the form of two-dimensional films, which limits the types of possible applications. In this new effort, the researchers sought to find a way to create generators using 3D printing.

Printing tiny generators, the researchers recognized, required the development to of a new kind of ink. They began by studying the properties of existing inks, looking specifically at their colloidal rheology, which involved studying correlations between the size and distribution of charge particles. They discovered that smaller particles and those that bunched into narrow distribution channels produced higher viscosity. They also found that controlling surface oxidation of thermoelectric particles reduced what is known as the screen effect due to additives. The net result was enhancement of rheological properties.

Using this knowledge, the researchers created a type of ink that could be used to print tiny columns (1.4 mms in height and less than 0.5mms in diameter) on top of a silicon chip. They then used their technique to print multiple columns on a chip and found that it could then be used as a thermoelectric device by heating just one side of it while chilling the other. They found the device had a power density of 479.0 μW cm–2—enough to power a tiny wireless sensor.

Scientists use holographic imaging to detect viruses and antibodies