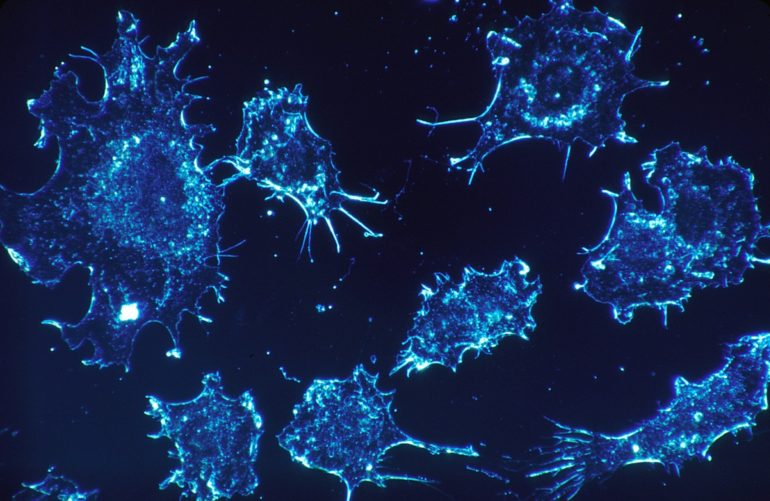 University of Alberta scientists have identified the mechanism of action behind a new type of precision cancer drug for blood cancers that is set for human trials, according to research published today in Nature Communications.

The research team led by Luc Berthiaume, cell biology professor in the Faculty of Medicine & Dentistry, spent four years working to understand how the compound PCLX-001 targets enzymes that perform myristoylation, a cellular process in which the fatty acid myristate modifies proteins so they can move to membranes and become part of the cell signalling system.

“The enzymes that transfer myristate onto proteins are overexpressed in some cancer cells, meaning there’s more of those enzymes, so they have long been thought of as a logical target for cancer treatment,” said Berthiaume, who is also chief scientific officer and co-founder of Pacylex Pharmaceuticals, the U of A spinoff company developing the drug.

“Until now no one has done a thorough analysis of this hypothesis,” Berthiaume said. “We actually found that several types of cancer cells have fewer of these enzymes, making them seemingly easier to kill with our lead drug.”

To demonstrate this, the researchers tested the drug against 300 different cancer cell types. They reported that blood cancer cells including lymphomas and leukemia, which have fewer of the enzymes, are extremely sensitive to the drug. It also killed other types of cancer cells when given at a higher concentration.

“We think PCLX-001 is a compound with a large therapeutic window that can kill the cancer cells at a much lower concentration than what is needed to kill normal cells,” he said. “That is the holy grail of cancer therapies.””Because of the highly selective nature of our drug, it’s often referred to as a precision medicine, and we anticipate minimal side-effects,” he said.

Provided by
University of Alberta Faculty of Medicine & Dentistry