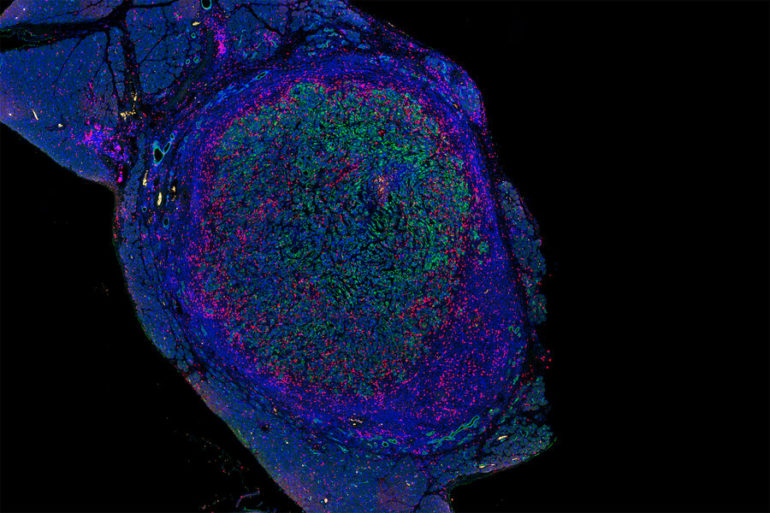 Pancreatic cancer, which affects about 60,000 Americans every year, is one of the deadliest forms of cancer. After diagnosis, fewer than 10 percent of patients survive for five years.

While some chemotherapies are initially effective, pancreatic tumors often become resistant to them. The disease has also proven difficult to treat with newer approaches such as immunotherapy. However, a team of MIT researchers has now developed an immunotherapy strategy and shown that it can eliminate pancreatic tumors in mice.

The new therapy, which is a combination of three drugs that help boost the body’s own immune defenses against tumors, is expected to enter clinical trials later this year.

“We don’t have a lot of good options for treating pancreatic cancer. It’s a devastating disease clinically,” says William Freed-Pastor, a senior postdoc at MIT’s Koch Institute for Integrative Cancer Research. “If this approach led to durable responses in patients, it would make a big impact in at least a subset of patients’ lives, but we need to see how it will actually perform in trials.”

Freed-Pastor, who is also a medical oncologist at Dana-Farber Cancer Institute, is the lead author of the new study, which appears today in Cancer Cell. Tyler Jacks, the David H. Koch Professor of Biology and a member of the Koch Institute, is the paper’s senior author.

The body’s immune system contains T cells that can recognize and destroy cells that express cancerous proteins, but most tumors create a highly immunosuppressive environment that disables these T cells, helping the tumor to survive.

Immune checkpoint therapy (the most common form of immunotherapy currently being used clinically) works by removing the brakes on these T cells, rejuvenating them so they can destroy tumors. One class of immunotherapy drug that has shown success in treating many types of cancer targets the interactions between PD-L1, a cancer-linked protein that turns off T cells, and PD-1, the T cell protein that PD-L1 binds to. Drugs that block PD-L1 or PD-1, also called checkpoint inhibitors, have been approved to treat cancers such as melanoma and lung cancer, but they have very little effect on pancreatic tumors.

Some researchers had hypothesized that this failure could be due to the possibility that pancreatic tumors don’t express as many cancerous proteins, known as neoantigens. This would give T cells fewer targets to attack, so that even when T cells were stimulated by checkpoint inhibitors, they wouldn’t be able to identify and destroy tumor cells.

However, some recent studies had shown, and the new MIT study confirmed, that many pancreatic tumors do in fact express cancer-specific neoantigens. This finding led the researchers to suspect that perhaps a different type of brake, other than the PD-1/PD-L1 system, was disabling T cells in pancreatic cancer patients.

When TIGIT is activated, the T cells enter a state known as “T cell exhaustion,” in which they are unable to mount an attack on pancreatic tumor cells. In an analysis of tumors removed from pancreatic cancer patients, the researchers observed TIGIT expression and T cell exhaustion from about 60 percent of patients, and they also found high levels of CD155 on tumor cells from patients.

“The CD155/TIGIT axis functions in a very similar way to the more established PD-L1/PD-1 axis. TIGIT is expressed on T cells and serves as a brake to those T cells,” Freed-Pastor says. “When a TIGIT-positive T cell encounters any cell expressing high levels of CD155, it can essentially shut that T cell down.”

The researchers then set out to see if they could use this knowledge to rejuvenate exhausted T cells and stimulate them to attack pancreatic tumor cells. They tested a variety of combinations of experimental drugs that inhibit PD-1 and TIGIT, along with another type of drug called a CD40 agonist antibody.

CD40 agonist antibodies, some of which are currently being clinically evaluated to treat pancreatic cancer, are drugs that activate T cells and drive them into tumors. In tests in mice, the MIT team found that drugs against PD-1 had little effect on their own, as has previously been shown for pancreatic cancer. They also found that a CD40 agonist antibody combined with either a PD-1 inhibitor or a TIGIT inhibitor was able to halt tumor growth in some animals, but did not substantially shrink tumors.

However, when they combined CD40 agonist antibodies with both a PD-1 inhibitor and a TIGIT inhibitor, they found a dramatic effect. Pancreatic tumors shrank in about half of the animals given this treatment, and in 25 percent of the mice, the tumors disappeared completely. Furthermore, the tumors did not regrow after the treatment was stopped. “We were obviously quite excited about that,” Freed-Pastor says.

Working with the Lustgarten Foundation for Pancreatic Cancer Research, which helped to fund this study, the MIT team sought out two pharmaceutical companies who between them have a PD-1 inhibitor, TIGIT inhibitor, and CD40 agonist antibody in development. None of these drugs are FDA-approved yet, but they have each reached phase 2 clinical trials. A clinical trial on the triple combination is expected to begin later this year.

The best PS4 Pro prices, deals, and bundles in December 2020

In CompaniesGaming
on 9 December 20206 min read

“This work uses highly sophisticated, genetically engineered mouse models to investigate the details of immune suppression in pancreas cancer, and the results have pointed to potential new therapies for this devastating disease,” Jacks says. “We are pushing as quickly as possible to test these therapies in patients and are grateful for the Lustgarten Foundation and Stand Up to Cancer for their help in supporting the research.”

Alongside the clinical trial, the MIT team plans to analyze which types of pancreatic tumors might respond best to this drug combination. They are also doing further animal studies to see if they can boost the treatment’s effectiveness beyond the 50 percent that they saw in this study.

In addition to the Lustgarten Foundation, the research was funded by Stand Up To Cancer, the Howard Hughes Medical Institute, Dana-Farber/Harvard Cancer Center, the Damon Runyon Cancer Research Foundation, and the National Institutes of Health.