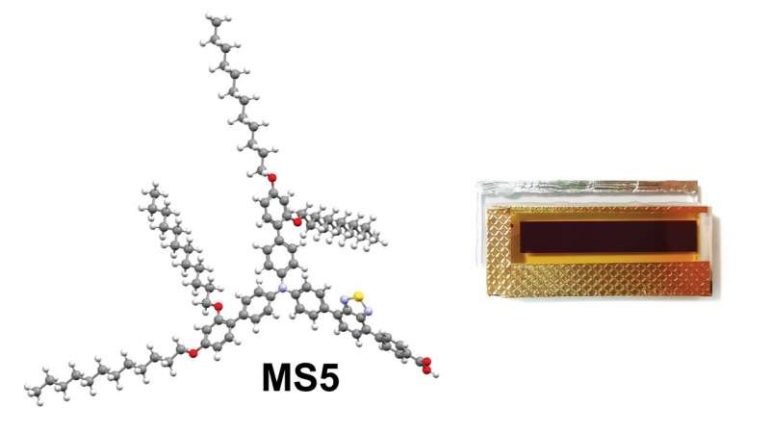 EPFL scientists have developed a new dye for solar cells that enables high power-conversion efficiency while being simple and cheap to make. The dye also works exceptionally well under low-light conditions, which is key for self- and low-powered devices.

In 1991, scientists Brian O’Regan and Michael Grätzel at EPFL published a seminal paper describing a new type of solar cell: the dye-sensitized solar cell (DSSC), also known as “Grätzel cell.” Simple and cheap to build while being flexible and versatile, DSSCs are already manufactured on a multi-megawatt scale, cutting a significant slice of the photovoltaic market, which currently supplies almost 3% of all the world’s electricity, well in the race to reduce carbon emissions.

Now, Dan Zhang and Marko Stojanovic, two Ph.D. students in Grätzel’s lab at EPFL’s School of Basic Sciences, have led the development of a simple dye for DSSCs, called MS5. In devices, this new sensitizer can either be used as single dye, and produce an open-circuit voltage—the maximum voltage a solar cell can reach in full sunlight—of 1.24 Volts or as co-sensitizer, along with the commercial dye XY1b, and enable a power conversion efficiency of 13.5 %. Both are among the highest in the field of DSSCs.

The work is published in Nature Communications.

The team used this new dye in combination with another organic sensitizer coded XY1b. Apart from absorbing photons from the blue and yellow domain of the solar emission, the role of the new dye in this tandem is to boost the voltage output of the device by retarding the recombination of charge carriers generated by light. Called MS5, the photosensitizer was used with a copper (II/I) electrolyte to enable the DSSC achieve its impressive efficiency.

“Our work constitutes an important breakthrough in the work of DSSCs and especially dye design,” says Michael Grätzel.”It shows that high performances are achievable with a relatively simple dye through judicious molecular engineering of the sensitizer’s molecular structure.”

Tested under ambient light conditions, the dye showed impressive performance, which is crucial for photovoltaics to be effective under cloudy conditions, or in-door applications to power electronic devices applied e.g. for the internet of things. And last but not least, MS5 is easy to synthesize up to the gram scale using a one-step procedure that researchers describe in their paper.

“Our results not only push the field of dye-sensitized solar cells further, but demonstrate EPFL’s leading expertise in the field,” says Marko Stojanovic.

Racial discrimination may affect whether people respond to email