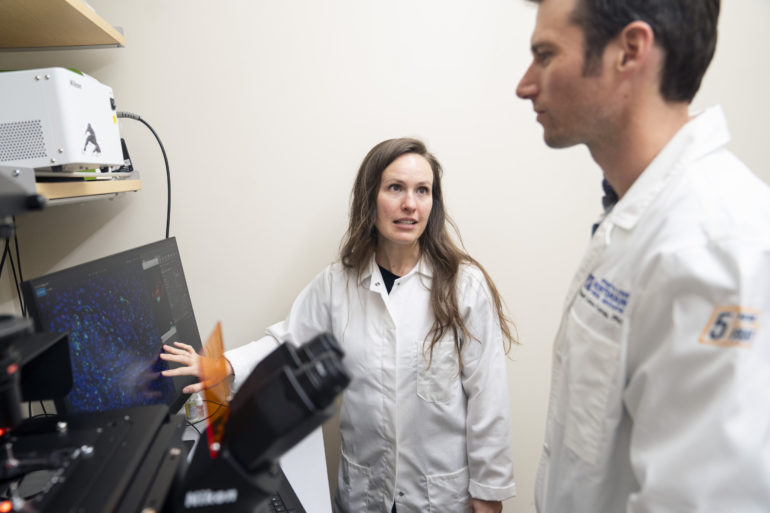 Researchers at Huntsman Cancer Institute (HCI) at the University of Utah (U of U) have generated the first “atlas” of human melanocytes located throughout the body. In analyzing the atlas data further, the researchers discovered there are different types of melanocytes, including what appears to be the cell of origin for acral melanoma, a subtype of melanoma that mostly affects people of color. Researchers predict these discoveries will lead to more targeted treatments for melanoma. The findings were published today in the journal Nature Cell Biology.

Melanoma, the deadliest form of skin cancer, originates in melanocytes, the cells that give color to the skin and protect it from the sun’s rays. Melanocytes were thought to be interchangeable but lead author Rachel Belote, Ph.D., HCI postdoctoral fellow in the Judson-Torres Lab, says, “I noticed that not all melanocytes respond to signals from surrounding cells in the same way. If melanocytes from the same piece of skin respond differently to the same stimuli, this would mean there are actually different types of melanocytes.”

“We also focused on single cell resolution, studying cells one at a time. It was the combination of several of these variables—specifically studying human developmental stages at different anatomic locations with single cell resolution—that permitted us to make the discoveries we did,” says Belote’s mentor and senior author on the study, Robert Judson-Torres, Ph.D., HCI researcher and U of U assistant professor of dermatology and oncological sciences.

One of those discoveries was a new melanocyte that appears to be the cell of origin for a specific subtype of melanoma called acral melanoma. Very few treatment options exist for this type of melanoma, which is the most common type in people with darker skin.

“This study really locks down that acral melanoma is its own thing,” says Judson-Torres. “Most of the history of exploring acral melanoma has treated it as a bit of an afterthought compared to the most common subtypes of melanoma that predominantly affect the white population.” Judson-Torres says the classic approach has been to first find treatments for the more common disease, then see if the treatment works on acral melanoma.

“This approach hasn’t been particularly successful. We expect this study to change how acral melanoma is approached and studied, and we hope it will rapidly lead to acral-specific therapeutics,” he says.

The study also revealed three more discoveries. The team found the specific genes associated with variations of skin tones in one single person, not related to sun exposure. The team identified genes that mark progressing melanomas that are less likely to respond to treatments. The team also discovered the genes that make human melanocytes unique.

The researchers are planning follow-up research, including developing acral melanoma-specific in vivo and in vitro models to begin screening acral-specific therapeutics.