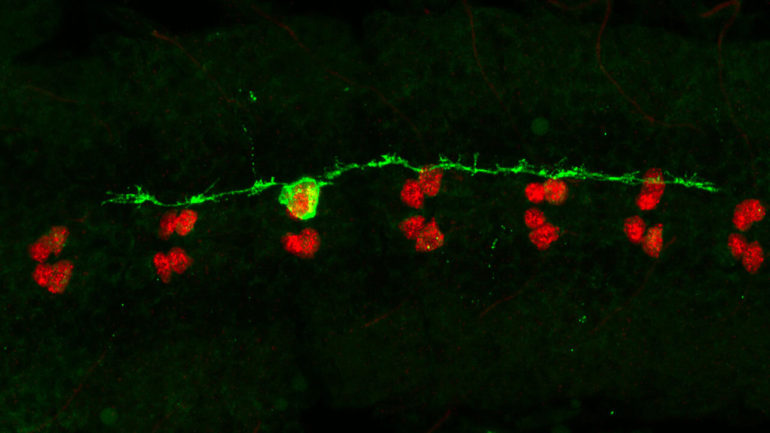 Most human cells are able to repair damage by dividing at wounds.

But mature nerve cells (neurons) in our brain are different. If they attempt division, they will likely die—and this is what happens during brain injury, or in conditions such as Alzheimer’s Disease (AD). Now new research led by the University of Plymouth has uncovered a pathway that has shed new light on how these divisions may be triggered.

The research, published today in Cell Reports, has focused on intracellular structures called microtubules—which are found in most animal cells, and can be damaged by a build-up of a protein called Tau in the brain during AD.

The study was conducted in fruit flies, with comparison to postmortem brain samples of AD patients.

The paper shows that when the microtubules of neural cells in fruit flies are damaged, division is triggered via activating the small signaling kinases, Tak1 and Ik2. Strikingly, activation of these molecules can also be seen in AD brains.

Why is this important?

By understanding how the damaged microtubules behave, scientists have a valuable opportunity to potentially prevent neuronal death following brain injury, or upon neurodegeneration, such as in Alzheimer’s Disease.

Abnormal human Tau destroys microtubules in both flies’ and Alzheimer’s brains, and interestingly can trigger the same signaling cascade as discovered in fly neural cells after microtubule damage.

The reseachers also found that higher levels of Tau accumulation correlated to a greater frequency of neurons attempting to divide and neuronal death, but have not yet established a direct link or cause.

What needs to happen next?

The work took place in the Plymouth Institute of Health and Care Research (PIHR) and was led by Dr. Torsten Bossing.

He said of the current research and future plans: “While other scientists are exploring Tau and how it builds up, we’re looking more at what happens to the cell after it has been damaged.

“The fact that the identified two signaling kinases are found alongside a build-up of Tau in post mortem brains of Alzheimer’s Disease patients suggests that the mechanism identified using fruit flies may act similarly in humans. So we want to further our studies by using cultured human neurons next. Ultimately we want to prevent this abnormal cell division entry process from happening in the first place. It’s an exciting piece of work, which we look forward to progressing.”