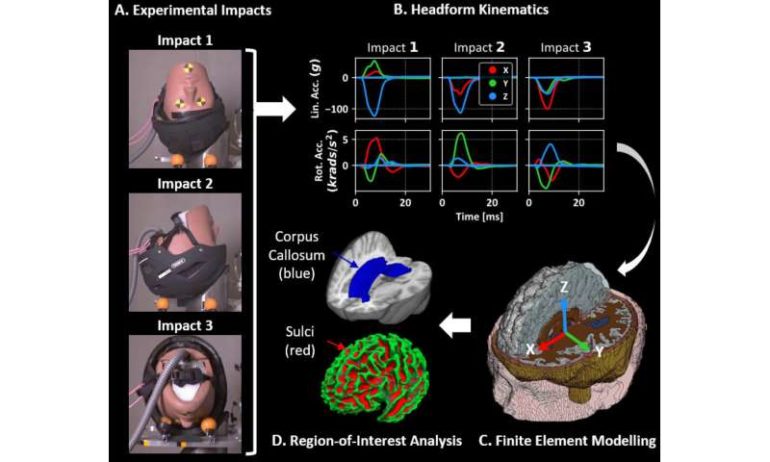 A new method tests for the first time how well helmets protect against the commonest and worst cycling brain injuries: those sustained from motion

Traumatic brain injuries (TBIs), which result from a sudden impact or jolt to the head, can cause bleeding, unconsciousness, and potential changes to the brain leading to memory loss, mood and personality changes and lack of concentration—sometimes many years after the initial injury. New helmet technologies have emerged in recent years to mitigate TBIs in collisions from cycling, but the way the effectiveness of bike helmets is currently tested leaves room for improvement.

The majority of real-world cycling-based TBIs are caused by rotational forces on the brain, which are generated by the head hitting the ground at a non-right (oblique) angle, mostly seen when cyclists fall or collide while moving. However, current methods test whether heads are protected from falls at right-angles, which happen mostly when bikes are stationary, and do not account for the rotational forces at play when cyclists fall to the ground at speed.

Lead author Fady Abayazid, Ph.D. student at Imperial’s Dyson School of Design Engineering said: “The amount of people cycling since the COVID-19 pandemic began has doubled on weekdays and trebled on weekends in parts of the UK. To keep themselves safe, it’s important that cyclists know the best way to protect their heads should they have a fall or collision.

“Cyclists falling from motion will most often hit the ground at a non-right-angle. These angles produce rotational forces that subject the brain to twisting and shearing forces—factors contributing to severe TBIs, which can be life-altering. However, current testing standards for bike helmets don’t account for this issue, so we designed a new analysis method to address this gap by combining experimental oblique impacts with a highly detailed computational model of the human brain.”

To carry out the study, the researchers set out to develop a way to compare the effectiveness of 27 different newer and more conventional helmets, including those fitted with impact-triggered airbags, friction-reducing layers, shearing pads, and wavy cellular liners.

Using a purpose-built rig at Research Institutes of Sweden, they put the helmets on crash test dummy heads that were the closest replicas of average male human heads available. They fitted them with accelerometers and dropped them headfirst, side-first, and back-first onto a 45° inclined anvil covered in sandpaper to simulate asphalt at 14 miles per hour, which is a common cycling speed. The impact points were selected based on reconstructions of 1,024 previous bicycle accidents which are part of a new helmet test standard proposal.

The dummy heads contained sensors that measured and recorded the rotational accelerations experienced during impact. These recordings were then applied to a finite element model of the human brain developed by the research team to analyze the potential damage to the brain as a result. The brain model includes the regions principally affected by TBI like the corpus callosum (the membrane separating the hemispheres) and sulci (the grooves on the brain’s surface).

The researchers used this anatomically detailed model of TBI, which was validated against previous cadaver studies, to predict the distribution of strain across the brain during oblique impacts from each helmet type.

They found that newer technologies reduced whole-brain strain compared with older helmets—an effect that was also seen in the corpus callosum and sulci. However, they also found that the effectiveness of newer helmets depended on their technology and location of impact.

Additionally, some helmets which were designed specifically to reduce rotational forces didn’t appear to accomplish their aims. Fady said: “Without a robust, fit-for-purpose testing method and scientific backing, consumers remain underinformed and designers have no specific measures to improve their design decisions.”

The researchers note that while their study heralds a better system of testing helmets, the paper lays a foundation upon which further studies should be built. For example, by using only dummy heads, the results do not account for how movement in the rest of the body might impact the way cyclists fall or collide. New studies should therefore test the effectiveness of these helmets in whole-body crash test dummies.

Senior author Dr. Mazdak Ghajari, also of Imperial’s Dyson School of Design Engineering, said: “With cycling’s popularity soaring, we are seeing more requests from the public and cycling communities for a thorough review of new helmet technologies to inform their purchases. However, this is hard to do without testing that accounts for rotational forces.

“Our research could help to address this gap, inform customers, improve safety, and reduce the frequency and severity of TBIs from cycling.”

The formation of the North American Monsoon: A unique case in the world

The authors are now looking into testing standards for motorbike and industrial helmets. Fady added: “Every hazardous activity presents its own challenges in terms of what helmets are needed, and how we can ensure the best possible protection.”

The Dyson School of Design Engineering has also built its own rig to carry out future experimental helmet impact tests.


Citation:
New testing for bike helmets accounts for head injuries sustained at speed (2021, May 12)
retrieved 12 May 2021
from https://medicalxpress.com/news/2021-05-bike-helmets-accounts-injuries-sustained.html