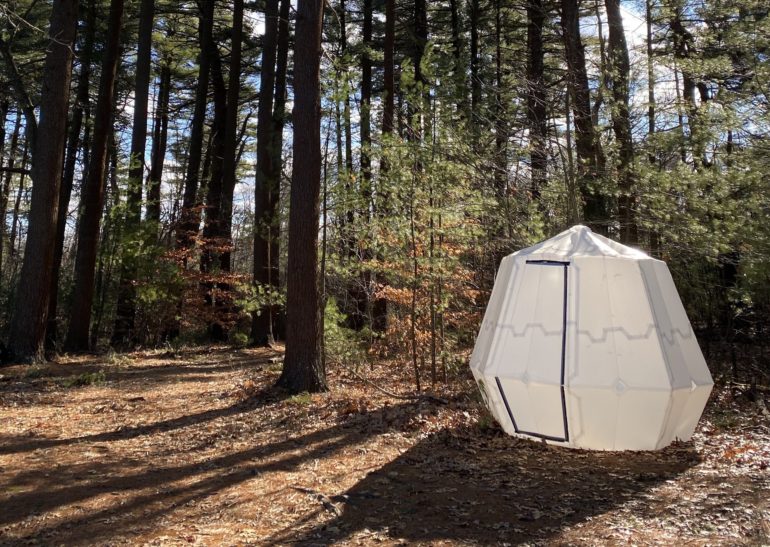 In 2016, an inflatable arch wreaked havoc at the Tour de France bicycle race when it deflated and collapsed on a cyclist, throwing him from his bike and delaying the race while officials scrambled to clear the debris from the road. Officials blamed a passing spectator’s wayward belt buckle for the arch’s collapse, but the real culprit was physics.

Today’s inflatable structures, used for everything from field hospitals to sporting complexes, are monostable, meaning they need a constant input of pressure in order to maintain their inflated state. Lose that pressure and the structure returns to its only stable form—flat.

But what if these structures had more than one stable state? What if the arch was just as stable inflated as it is flat on the ground?

Now, researchers at the Harvard John A. Paulson School of Engineering and Applied Sciences (SEAS) have developed bistable inflatable structures inspired by origami.

The research is published in Nature.

“This research provides a direct pathway for a new generation of robust, large-scale inflatable systems that lock in place after deployment and don’t require continuous pressure,” said Katia Bertoldi, the William and Ami Kuan Danoff Professor of Applied Mechanics at SEAS and senior author of the paper.

Inspired by origami and guided by geometry, the research team developed a library of triangular building blocks that can pop up or fold flat and be combined in different configurations to build closed, multistable shapes.

“We are relying on the geometry of these building blocks, not the material characteristics, which means we can make these building blocks out of almost any materials, including inexpensive recyclable materials,” said Benjamin Gorissen, an associate in Materials Science and Mechanical Engineering at SEAS and co-first author of the paper.

Taking their design process to the real world, the researchers designed and built an 8 foot by4 foot inflatable shelter out of thick plastic sheets.

“You can imagine these shelters being deployed as part of the emergency response in disaster zone,” said David Melancon, a Ph.D. student at SEAS and co-first author of the paper. “They can be stacked flat on a truck and you only need one pressure source to inflate them. Once they are inflated, you can remove the pressure source and move onto the next tent.”

The shelter can be set up by one or two people, as opposed to the dozen or so it takes to deploy today’s military field hospitals.

The building blocks of these origami structures can be mixed and matched to create a structure of any shape or size. The researchers built a range of other structures, including an archway, an extendable boom and a pagoda-style structure. The researchers also designed shapes with more than two stable forms.

“We’ve unlocked an unprecedented design space of large-scale inflatable structures that can fold flat and maintain their deployed shape without the risk of catastrophic rupture,” said Chuck Hoberman, the Pierce Anderson Lecturer in Design Engineering at the Graduate School of Design and co-author of the paper. “By using inflatable, reversible actuation to achieve hard-walled structural enclosures, we see important applications, not only here on Earth, but potentially as habitats for lunar or Mars exploration.”