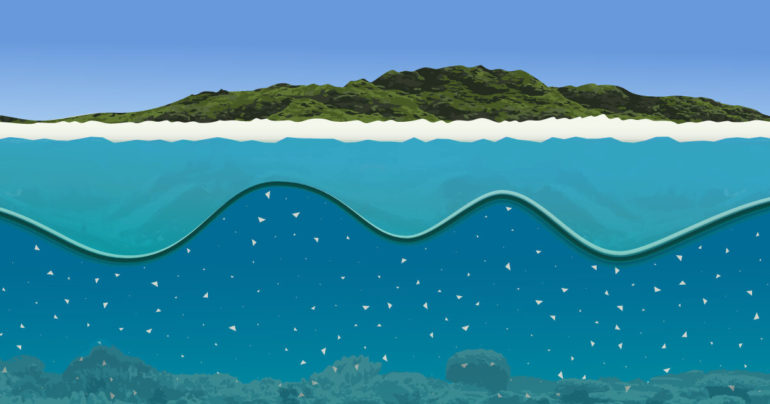 Research conducted in the Light-Matter Interactions for Quantum Technologies Unit at the Okinawa Institute of Science and Technology Graduate University (OIST) has revealed the presence of small microplastics in the ocean surrounding Okinawa. The study was published in Science of the Total Environment.

“There’s been a considerable amount of research on larger plastic pieces in the ocean,” said Christina Ripken, Ph.D. student in the Unit and lead author of the paper. “But the smaller pieces, those that are less than 5mm in size, haven’t been in the spotlight, so it was important to identify whether they’re present and the impacts they might have on living organisms.”

Okinawa was an interesting place to carry out this study. A small, subtropical island in southern Japan, it is surrounded by fringing coral reefs, which means that the ocean around the beaches is reliant on surface water and wind. It has also been deemed a ‘blue zone’—a region whose residents are exceptionally long-lived. Therefore, the researchers thought it crucial to monitor ocean pollution as it may adversely affect these residents.

In collaboration with the Okinawa Prefecture Government, Christina carried out the sampling in September 2018. Six sites were visited close to the island’s shoreline. To look at a range of different areas, two of the sites were to the south of the island, two were around the center, and two to the north. In Naha, the capital of the Okinawa Prefecture, samples were taken from beside the industrial port and the airport. Naha has an estimated population of over 300,000 inhabitants, which represents a fourth of the total population of the island. In contrast, Cape Hedo, at the far north of the island, has a very low population and is considerably less urbanized.

At each site, the surface water was trawled for one kilometer, allowing approximately 800 liters of water to be filtered and small particles to be removed. These particles were then analyzed in the lab at OIST.

The optical tweezers technique uses lasers to hold the particle in the liquid, while the micro-Raman technique identified the unique molecular fingerprint of each particle. This allowed the researchers to see exactly what was present, whether that be organic material, trace metal, or different plastics like polyethylene or polystyrene.

“This method is what sets the study apart from other research into marine microplastics,” said Dr. Kotsifaki. “It meant that we didn’t need to filter out the plastic first, so we could see if there was plastic embedded within organic material or if any trace metals were present and the concentration of the plastics in the sampled seawater.”

As can be expected, the researchers found that there was more plastic in the water to the south of the island than to the north. But somewhat surprisingly, they found that the plastic correlated more with where people were living rather than with particularly industrialized areas.

Concerningly, they found plastic in all the samples.

Over 75% of the plastics found in the samples were made from polyethylene, which the researchers theorized could come from broken fishing equipment, water bottle caps, household utensils, plastic bags, plastic containers, and packaging.

“In the fishing communities, at the ports and beaches where the fish are landed, workers use woven polymer sacks to store and transport items including fish,” said Christina. “This is an example of how the small pieces of plastic might be leaching into the ocean.”

Another way is through plastic in road dust. Recent research found a high concentration of microplastics in dust samples taken from the roads of Okinawa’s heavily urbanized areas, which have considerable amounts of vehicle traffic. Some of this road dust may now be found in the ocean around Okinawa.

“We found more plastic around the heavily urbanized area in the south of the island than around the industrialized center or the rural north, but everywhere we found plastic,” said Christina. “Our method means that we have a clearer view on the prevalence of microplastics around Okinawa and this can lead to risk analysis and influence policy. We hope it will help boost the environmental research area.”

Plastic is blowing in the wind