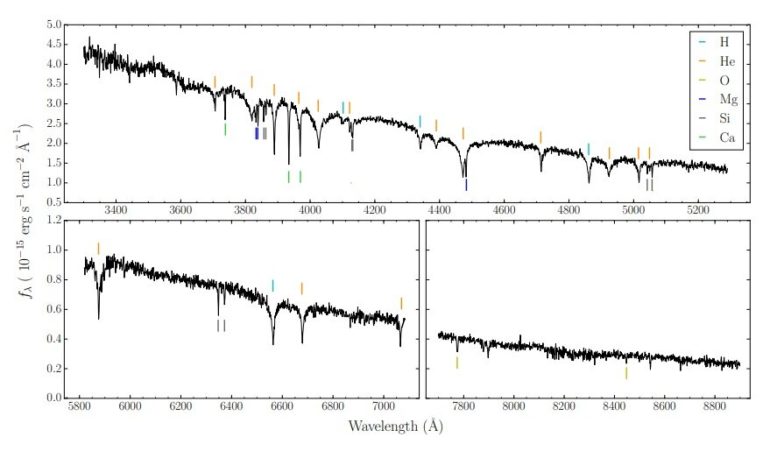 Astronomers have performed spectroscopic observations of a newly detected white dwarf star known as GD 424. Results of the observational campaign provide more insights into the atmosphere of this object. The study was presented in a paper published December 23 on arXiv.org.

White dwarfs are remaining compact cores of low-mass stars that have exhausted their nuclear fuel. Although their atmospheres are mainly composed of hydrogen or helium, between 25 and 50 percent of all known white dwarfs show traces of metals in their spectra. It is assumed that these metals originate in the accretion of tidally disrupted planetary bodies. Spectroscopic observations of metal-polluted white dwarfs could be an essential tool to measure the bulk compositions of the parent bodies.

Hence, a team of astronomers led by Paula Izquierdo of the University of La Laguna, Spain, conducted spectroscopic observations of GD 424—a metal-polluted, helium-atmosphere white dwarf of spectral type DB with a large amount of trace hydrogen. For this purpose, they employed the Intermediate dispersion Spectrograph and Imaging System (ISIS) mounted on the 4.2-m William Herschel Telescope (WHT) and the High-Resolution Echelle Spectrometer (HIRES) of the 10-m Keck I telescope.

“We presented the discovery and chemical abundances analysis of GD 424, a metal-polluted DBA white dwarf with one of the largest amounts of trace hydrogen measured so far among white dwarfs with similar temperatures,” the scientists wrote in the paper.

The researchers used a hybrid method to fit synthetic spectra, survey photometry and data from the ESA’s Gaia DR2 parallax to the obtained WHT optical spectrum, which allowed them to determine the photospheric parameters of GD 424. It was found the white dwarf has an effective temperature of about 16,560 K, mass of around 0.01 solar masses, radius of around 0.0109 solar radii and cooling age estimated to be approximately 215 million years.

Analyzing the spectra from WHT and Keck, the team identified 11 metals in the atmosphere of GD 424, namely oxygen, sodium, manganese, chromium, nickel, silicon, iron, magnesium, titanium, calcium and aluminium. The astronomers assumed that the presence of these elements is due to the accretion of a planetary body onto the white dwarf.

They added that GD 424 is most likely accreting dry, rocky debris in either the increasing or steady state. The photometric results also allowed the researchers to estimate the parent body composition.

Further observations of GD 424, focused on measuring abundances of volatile elements, are required in order to get more insights into the nature of the parent object.

More information:
GD424 – a helium-atmosphere white dwarf with a large amount of trace hydrogen in the process of digesting a rocky planetesimal, arXiv:2012.12957 [astro-ph.EP] arxiv.org/abs/2012.12957