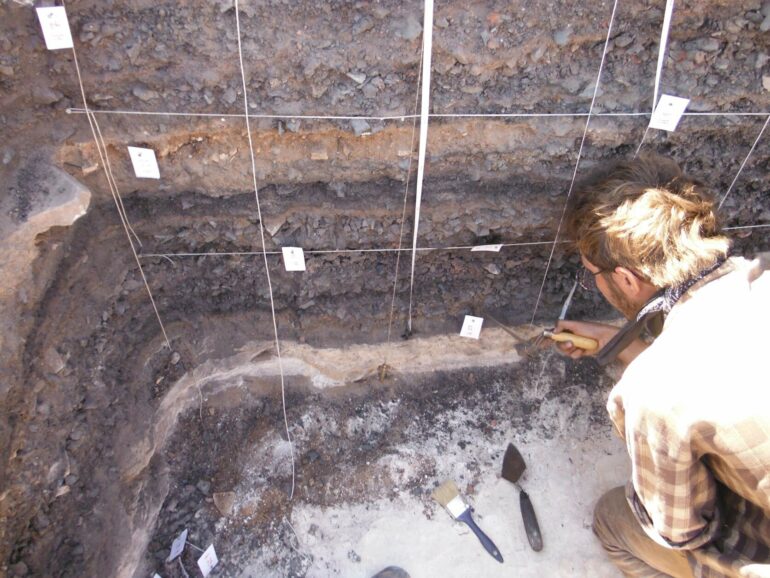 Researchers from Tel Aviv University collected samples of charcoal used as fuel for metallurgical furnaces in the Timna Valley, located in Israel’s southern desert region, during the 11th to 9th centuries BCE and examined them under a microscope. They found that the charcoal fuels used changed over time. The earlier samples contained mainly local white broom and acacia thorn trees, excellent fuel available nearby, but the quality of the firewood had deteriorated over time, with later samples consisting of low-quality wood fuel and timber imported from afar.

“Our findings indicate that the ancient copper industry at Timna was not managed in a sustainable manner, with overexploitation of local vegetation eventually leading to the disappearance of both the plants and the industry. Copper production was not renewed in this region until about a thousand years later, and the local environment has not recovered fully to this day,” says the researchers.

The study was conducted by Ph.D. student Mark Cavanagh, Prof. Erez Ben-Yosef, and Dr. Dafna Langgut, head of the Laboratory of Archaeobotany and Ancient Environments, all from TAU’s Jacob M. Alkow Department of Archaeology and Ancient Near Eastern Cultures, and Dr. Langgut is also affiliated with the Steinhardt Museum of Natural History. The study was published in Scientific Reports.

Prof. Erez Ben-Yosef, director of the archaeological excavations in the Timna Valley, says, “Many findings in the Timna Valley indicate that a vast copper industry flourished here for a period of about 250 years, between the 11th and 9th centuries BCE, with thousands of mining sites, and about 10 processing sites that used furnaces to extricate copper from the ore.

“This impressive operation is known to the public as ‘King Solomon’s Mines,’ and today we know that copper production actually peaked here at about the time of Kings David and Solomon. The Bible never mentions the mines as such, but it does tell us that David conquered the area of Timna, known at the time as Edom, placing garrisons throughout the land, so that the Edomites became his subjects; and that his son Solomon used huge quantities of copper for building the Temple in Jerusalem.

“We can only assume that David took an interest in this remote desert region because of its copper—an important and valuable metal at the time, used for making bronze among other purposes. The Timna copper industry was run by the local Edomites, who specialized in this profession, and copper from Timna was exported to distant lands, including Egypt, Lebanon, and even Greece. This study shows, however, that the industry was not sustainable, a fact that may fit in well with occupation by a foreign power, perhaps ruled from Jerusalem.”

The researchers explain that Timna’s copper industry was highly advanced for its time, and that the metalsmiths who processed the copper were skilled and well-respected individuals. The copper was extracted from the ore via smelting in earthenware furnaces at a temperature of 1,200 degrees Celsius. The entire process took about eight hours, after which the furnace was smashed, and the copper