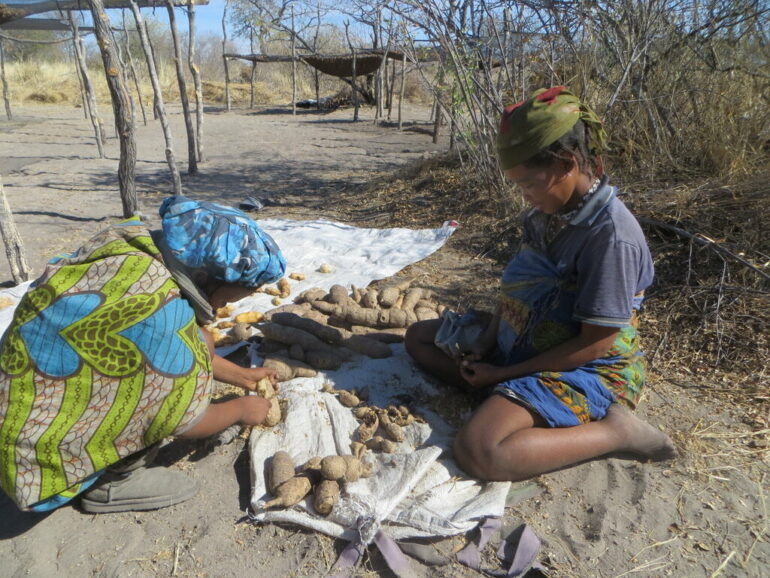 If you visit the Ju/’hoansi people of northeast Namibia and northwest Botswana, you will see families that make a living from a mixture of foraging, government aid, selling crafts and other ventures. Most people have some monetary income used to buy food, clothing and other goods. Some of the very few with salaried government jobs may have cars and furniture. Mud huts stand alongside stone houses. Wealth is unequally distributed and hiding behind some of that wealth is debt.

It wasn’t always like this. Money is new in Ju/’hoansi society. Two generations ago, their economy was largely based on foraging wild plant and animal resources. Since the late 1970s, the Ju/’hoansi have moved into semi-permanent villages and engaged in a mixed economy that includes monetary income. With money, however, come new choices.

In a new study, Polly Wiessner, research professor in the University of Utah Department of Anthropology and at Arizona State University, and Cindy Hsin-yee Huang of Arizona State, explore how money changed the Ju/’hoansi society. Some things from the forager days, like sharing meals and gifting with close family, haven’t changed. Other things, like extended kinship networks and need-based community giving, definitely have.

“We don’t know what’s going to happen next,” Wiessner says. “I’ve seen a change in norms or conventions from having to share most of what you have to being allowed to keep your cash income and fill your own needs, and then share what’s left over.”

The study is published in Proceedings of the National Academy of Sciences.

History of the Ju/’hoansi bushmen

How does a society function without money? Before money, the Ju/’hoansi economy was based on sharing and gifting.

“Say that someone kills a large animal,” Wiessner says, “and there’s plenty of meat. Well, he can give out that meat at very low cost to himself because it’s going to rot anyway. But the receiver who might be quite hungry and in need, will regard that meat as a great benefit.”

The nomadic hunter-gatherer society also distributed possessions throughout their communities through gifting things to each other. The gifts served to give information about the status of the underlying relationship, share necessities and strengthen social bonds, as each gift carried with it a connection between giver and receiver.

These traditions of gifting and sharing came together in a system called hxaro, which defined the kin each Ju/’hoansi was responsible for caring for. In hard times, Ju/’hoansi could rely on, or even live with, their hxaro partners in other villages up to 125 miles (200 km) away for months at a time. In 1974, 69% of Ju/’hoansi possessions had been received as hxaro gifts.

But then money entered their society, setting off gradual cultural changes. During the 1970s, amid losses of Ju/’hoansi traditional lands, the government of Namibia established a homeland for the bushmen called Nyae Nyae. Over the next few decades the Ju/’hoansi began raising animals and crops on a small scale and began receiving government assistance for children and pensions for the elderly, as well as some employment in the district capitol of Tsumkwe. That government assistance is vital, since families have struggled to provide basic necessities following the loss of their foraging lands.

In addition to that government assistance, residents of Nyae Nyae also harvest the Devil’s Claw plant, which grows in the bush and can be sold to pharmaceutical companies as an analgesic, providing another source of income.

So, before we go on, let’s pause and reflect on the concept of money. Going back to the concept of sharing meat from a large kill—that’s a transaction that costs the giver little, since they have too much to use, and benefits the receiver greatly, since they are in need. But if you bring money into the equation, now sharing money costs the giver the same as it benefits the receiver, since the value of the money is fixed. Sharing is now more expensive.

It also detaches the meaning of items acquired through social relationships, sort of like how a gift certificate to a bookstore doesn’t mean the same as a book that someone chose from that store as a gift for you. For the Ju/’hoansi, almost all of their possessions previously had come from a gift given within a social bond.

“So the object, the gift, is never detached from the relationship,” Wiessner says. “All your material goods have some relationship embedded in them, while with money, you just go to the store and you’ve got it, and there’s no social relationship.”

How money changed sharing and gifting

Between 1996 and 2018, Wiessner surveyed the Ju/’hoansi in Nyae Nyae, learning about their lifestyle and social networks. She compared this data, including surveys of where people’s possessions had come from, with data she’d collected in the mid-1970s, when she first visited them in Botswana. With the help of her longtime Ju/’hoansi research assistants, Wiessner continued gathering and analyzing data on how villagers spent their money between 2020 and 2022.

She found, most notably, that the hxaro system of exchange in an extended kin network had essentially collapsed. By 1997, the number of hxaro partnerships had fallen by half. By 2018, the system was essentially little more than a story told by elders.

Why did it decline so rapidly? Previously, in hard times, a band of Ju/’hoansi would disperse and live with hxaro kin, contributing their hunting abilities and gaining the resources of their hosts. Now, with permanent settlements and the food options offered by money, sharing with visitors became more expensive than it had been previously.

And with cash, the social economy is changing. Ju/’hoansi respect each other’s autonomy to do with their money as they wish and to take care of their own family first. “When I get paid, I do get many requests,” one villager said. “I tell my family and friends that first I will pay off my store debts and buy food, school uniforms and other goods for the family and for myself. If no money is left, I tell them perhaps next time I can give them something. That is how I manage to have enough for myself but keep my friends.”

Sharing and gifting haven’t completely disappeared, but have shifted to reflect the new economy. Instead of sharing meat from large kills (which still happens, but such kills are rare), communities share “tea and sugar parties” and extended family meals. Gifts are still given, but are now purchased instead of made. And gifting with distant kin, which constituted 23% of gifting in 1974, has fallen to 1% of gifting in 2018.

How money changed the social order

Unsurprisingly, the introduction of money created disparities in wealth. The few salaried government workers received significantly more money than other villagers, and spent it on cars, houses, furniture and other possessions that are out of reach for many Ju/’hoansi.

But, perhaps surprisingly to Americans, money did not create other forms of social inequality. Even though 90% of the highest-paying government jobs went to men, for example, women pursued income through other means, such as harvesting Devil’s Claw. There was no significant difference in the number of possessions purchased by women and men in any given year or residence, suggesting little gender inequality.

“There was always gender equality,” Wiessner says, “and sometimes people think that because men have more jobs it will decrease, but it doesn’t.”

The Ju/’hoansi value egalitarianism, she says, which means that each person respects each other’s autonomy to pursue economic activities. That helps prevent social inequalities between different income brackets. Expensive stone houses, she says, are built alongside mud huts.

“No bushman hires another bushman to do their dirty work,” Wiessner says. “If people try to gain political power, they’re put down. I don’t know how long this will last, you really can’t say, but for the time being, very strong egalitarian principles are holding, even though the material differences are great.”

Yes, money has changed Ju/’hoansi society. That doesn’t mean the previous foraging lifestyle was ideal—it was marked by periodic poverty, anxiety and food insecurity, Wiessner says. There are benefits in being able to purchase food, clothing and other necessities. But what happens when needs have been covered and more and more things that used to be wants become needs?

“When more becomes available—computers, fancy phones, all these things—these move from being wants to being needs in our perception,” she says. “And that’s what happens to the Ju/’hoansi as well. A certain amount of material goods to make them comfortable—clothing, shoes, etc—become needs rather than just wants. And that’s what money really does. It changes the society because it continually has more and more moved into the category of needs.”

This is something Wiessner says she sees rampant in Western society, but by learning from the Ju/’hoansi, she’s been able to see it emerge from the very beginning of money’s entry into a society.

“What I don’t see is the use of money to create social inequalities, that’s not happening yet,” she says. But the society will likely continue to change. Currently, there are no social institutions that enable one Ju/’hoansi to employ another or enforce payment for services rendered, neither are there institutions to enforce payment of interpersonal loans (although stores have been willing to extend lines of credit, introducing debt as well).

“So what I will have to see,” says Wiessner, continuing her nearly 50-year study of Ju/’hoansi society, “is if some new institutions develop to deal with money in the current situation.”

More information:
Polly Wiessner et al, A 44-y perspective on the influence of cash on Ju/’hoansi Bushman networks of sharing and gifting, Proceedings of the National Academy of Sciences (2022). DOI: 10.1073/pnas.2213214119