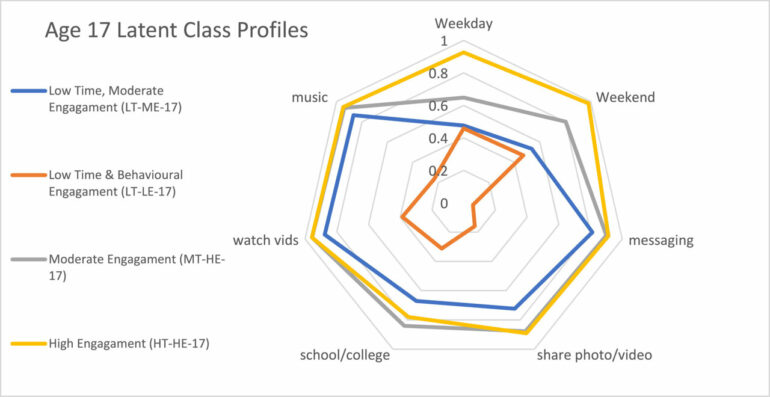 New research from the Department of Sociology in Trinity College Dublin has found further evidence of a relationship between online engagement and mental well-being in teenagers. The study, published recently in the journal Computers in Human Behavior, contributes to mounting international evidence on the dangers of high levels of digital media use.

Additionally, the researchers found that in today’s connected world low engagement with digital media is also associated with poor mental health outcomes for adolescents who spend less time online than their peers. This finding supports the “goldilocks” hypothesis—that digital media use at moderate levels is not intrinsically harmful and there is a point between low and high use that is “just right” for young people.

This is the first time the “goldilocks” theory has been examined in Irish teenagers/young adults. It is also the first study to attempt the integration of both time and online behaviors when examining associations between digital media and mental well-being.

Professor Richard Layte, professor of sociology and co-author on the paper, said: “Evidence is mounting internationally that online engagement among adolescents may be damaging for mental well-being but the evidence is mixed. Our work provides fresh insights on the impact of digital engagement at the age of 17/18 and the results provide worrying evidence of real harms that require urgent action.

“There is a simple narrative out there that more is worse. It is important to emphasize that online engagement is now a normal channel of social participation and non-use has consequences. Our findings also raise the possibility that moderate use is important in today’s digital world and that low levels of online engagement carries its own risks. Now the questions for researchers are how much is too much and how little is too little?”

The research, drawing on longitudinal data from the Growing Up in Ireland study, looked at the association between adolescent use of online engagement and mental well-being in more than 6,000 young people between the age of 13 and again at the age of 17/18.

The researchers asked participants to report the time they spent on line as well as the activities they engaged in: online messaging, sharing of videos and pictures, school or college work, watching movies and listening to music. Mental well-being was assessed by questions investigating emotional, behavioral and peer issues.

The study characterized young person’s online behavior based on length of time spent online as well as the types of online behaviors engaged in. Adjusting for prior psychiatric disorders and symptoms at the age of 9 and 13, the study found that high engagement in digital media strongly predicted worse mental health outcomes for both boys and girls. Furthermore, low use of digital media was associated with worse mental health for both boys and girls and was also predictive of peer problems for girls.

Dr. Ross Brannigan, lead author of the study and a former postdoctoral researcher in Trinity’s Department of Sociology, said: “This study is novel in that it considers the importance of both time and online behaviors when examining associations between digital media and mental well-being. We found clear distinctions between groups spending similar time online, but differing in their behaviors online. This indicates the importance of considering both time and behaviors online as well as the quality of these behaviors, for example passive compared to active behaviors, or the types of behaviors such as social, educational, entertainment.

“Digital media and online usage is a controversial topic when it comes to its effect on mental health, with no real consistency of results overall. While these results are not causal or deterministic, our findings are an important first step on the path to revealing why these relationships exist. It will now be importance to build on these findings and further investigate WHY digital media engagement may be related to mental well-being.”

This study is part of the TeenPath Project, a collaborative project between the Department of Sociology in Trinity College Dublin and the Department of Public Health and Epidemiology in The School of Population Health, Royal College of Surgeons in Ireland.


Citation:
A ‘goldilocks amount’ of time spent online could be good for teenagers’ well-being (2022, May 31)