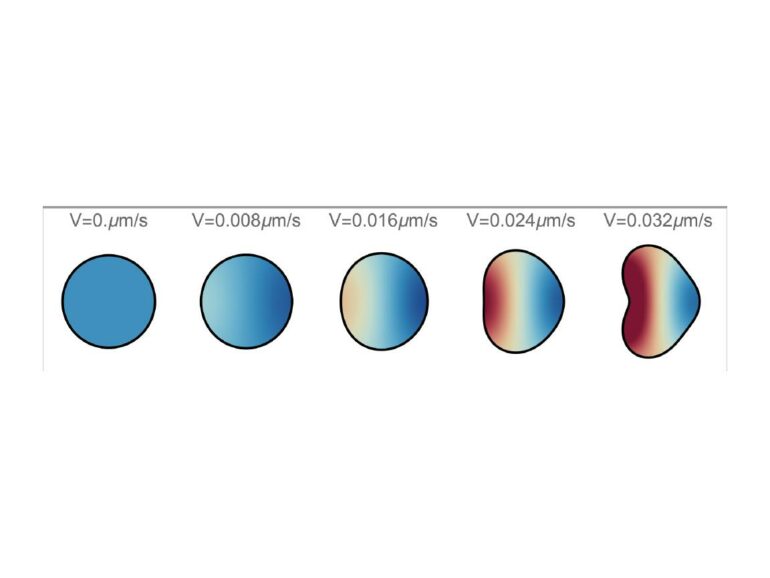 A mathematical model that describes how cells change their shape during movement suggests that the movement is mainly driven by the contraction of the skeletal proteins, called “myosin.” The new model developed at Penn State can help researchers to better understand the various biological processes where cellular movement plays a key role and also could inform the development of artificial systems that mimic biological processes.

“The focus of this work is on the development of minimal mathematical models that are simple enough to be amenable to rigorous analysis but still capture key biological phenomena,” said Leonid Berlyand, professor of mathematics at Penn State and the leader of this research team. “The point of our model is to capture the onset of cell motion driven by myosin contraction with focus on analyzing the stability of this motion observed in experiments.”

According to C. Alex Safsten, a doctoral student at Penn State and an author of the paper, some cells—such as “keratocytes”—which help maintain the structure and transparency of the cornea in the eye—naturally move across surfaces. Generally, these cells move by first protruding a portion of their cellular membrane in the direction of travel, adhering that protrusion to the surface, and then contracting proteins that form part of the “skeletal” structure of the cell to drive the cell forward.

To investigate more closely how this works, the research team expanded on previous models, which described cellular movement in one dimension, to build a two-dimensional model. Importantly, the model is stable—meaning that small perturbations do not disturb the motion of the cells in the model, which lines up with actual experimental experience. The mathematical model can also tease apart the contributions of the various stages of cellular movement: the protrusion, adhesion and contraction. In this way, the researchers were able to show that the contraction of the myosin proteins is sufficient to explain cellular movement.

One potential application for the models is in “biomimetic” systems—engineered systems that mimic biological processes.

“Evolution has optimized biological processes over millions of years,” said Safsten. “If, for example, we would want to develop nanobots that move in an efficient manner like cells do, we would need to precisely understand cellular movement in order to model our artificial system as mother nature has shaped the cells.”


Citation:
A new mathematical model of cellular movement (2022, May 17)