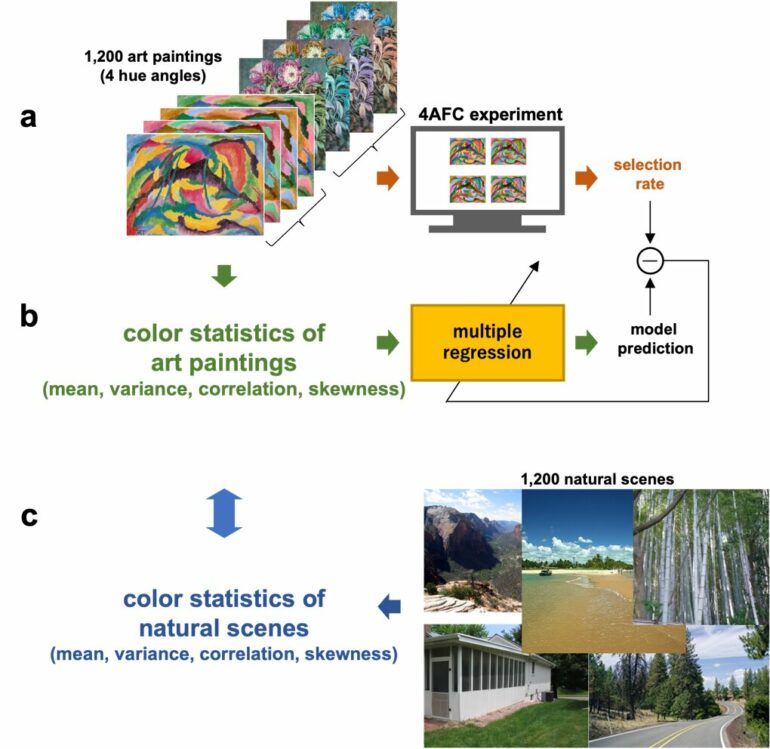 In addition to predicting color composition preferences, the results of this study may provide clues to fundamental questions such as why people are attracted to certain color schemes, and the nature of preference and attraction.

Color is one of the most influential features in determining our preferences. Beauty, as the saying goes, is in the eye of the beholder, and preferences differ from person to person.

In this study, the researchers began by measuring preferences (selection rate on the four-alternative forced-choice task) among more than 30,000 participants for 1,200 paintings presented in four forms: their original form and three “fake” forms where the hue angle was rotated by 90, 180, and 270 degrees.

Next, twelve types of statistics (mean, variance, correlation, and skewness) were calculated to represent the distribution of colors in the 4,800 images used, and correlations between these color statistics and the selection rate, which indicates the level of preference of the image (what percentage of participants preferred it), were examined using multiple regression analysis.

So, why are these particular color statistics related to color composition preferences? Professor Nakauchi’s research group focused on the “matching-to-nature” hypothesis, the idea employed by many previous researchers that the color compositions found in paintings resemble those of natural scenes.

From this idea it can be inferred that painters unknowingly embed in their paintings the features of natural scenes that we often see in our daily lives, which is why participants favored original color compositions over “fake” ones, in which the natural characteristics are lost due to the hues being rotated.

The results showed that the distributions of the statistics pertaining to color composition preferences systematically differed from those of the natural scenes. In other words, it was revealed for the first time that color compositions found in paintings do not simply imitate natural scenes, but have their own unique features, which is linked to preferences of observers and the attractiveness of certain color schemes.

This discovery of color statistics linked to color composition preferences may enable the attractiveness of color compositions to be inferred from color statistics, not only in paintings but in a wide range of objects. The findings are also expected to stimulate new research aimed at answering fundamental questions such as what kind of biological values are involved in attraction to certain color schemes.

Provided by
Toyohashi University of Technology