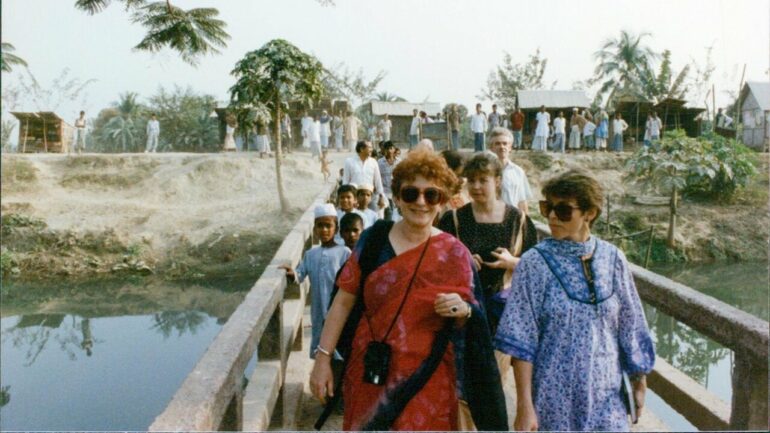 On a sweltering July day in 1984, Jane Menken stepped off a plane in the teeming capital city of Dhaka, Bangladesh, boarded a van for a dusty, four-hour journey to the remote villages to the south and embarked on a decades-long quest to answer a question of global importance: What happens when women gain the ability to control their reproductive destiny?

Just 13 years earlier, U.S. Secretary of State Henry Kissinger had written off the newly born nation of Bangladesh as a famine-stricken and insolvent “basket case.” With 64 million people in a region about the size of Wisconsin, it was the most densely populated non-island country on the planet. And with a fertility rate of seven children per woman, about 14 percent dying before their first birthday, it was considered the poster child for those warning of an impending “population bomb.”

But by the time Menken arrived, a transformation was quietly brewing—one woman at a time.

In the conservative Muslim district of Matlab, where she was headed, a nongovernmental organization had begun to provide free, in-home contraceptive access to tens of thousands of women, otherwise secluded due to religious customs that require women to segregate themselves from men.

Menken, a mathematician-turned-social-demographer with a focus on public health, had been crunching numbers about the initiative from afar since its inception. With her own children now grown and her classes dismissed for summer, she had the chance to see things for herself now.

“I didn’t want to just be a tourist,” recalls Menken, a Distinguished Professor of sociology at the University of Colorado Boulder, in her home adorned with hand-stitched pillows, silver jewelry molds and decorative bowls collected during her time in what became a second home.

“I wanted to see how the people behind the numbers lived, and I wanted to use those numbers to benefit society.”

She would return for months every year for more than three decades, bringing along protégés from Boulder and beyond to spearhead one of the longest and largest studies of family planning ever conducted.

Today, Menken, who served as director of the Institute of Behavioral Science from 2001 to 2015, is considered a pioneer in her field—one of the first to prioritize women and their desires about childbearing as a central focus of research.

And Bangladesh, which turned 50 this year, is now viewed as a model of progress, with a booming economy and a fertility rate of just two children per woman—most of those kids far better off than their predecessors.

“We cannot say that family planning alone caused Bangladesh’s positive development story,” Menken stresses, noting that the country was also remarkably supportive of girls’ education and vaccination. “But the Matlab study shows that a family planning program, even in a region that is desperately poor, illiterate and isolated, can lead to early adoption of contraception and smaller family size. It can change a mindset, and that can have sweeping, lasting effects.”

Bringing contraception to women where they are

Launched in October 1977 by the International Centre for Diarrhoeal Disease Research, Bangladesh, now known as icddr,b, the program hinged on the idea of empowering women to help women. Trained local women went door-to-door each month, discretely providing access to a variety of birth control measures, including injections (which were immensely popular due to their lack of evidence). About half of the 150 villages, constituting about 100,000 households, were included, providing a natural experiment with a built-in control group.

In 1982, the program added other family health services, including vaccinations.

By 1989 it was scaled up to include other parts of Bangladesh.

All the while, icddr,b conducted painstakingly detailed household surveys, tracking births, deaths, migrations and marriages monthly. When Menken and her team arrived, they added to the massive dataset with follow-up surveys, working with residents to ask women questions about everything from their children’s health and cognition to what they did for a living when they grew up.

Menken, with her blazing red hair and boundless energy, became a fixture in Matlab, pitching in to help when historic floods in 1988 shredded tin-roofed homes and buried rice fields in feet of sand. When she returned nine months later, villages that had been wiped out were rebuilt.

“The resilience of the people there still just amazes me,” she says.

How, if at all, did the lives of early participants in the family planning project turn out differently? A series of studies now beginning to be published offers insight.

The women had fewer children, spread farther apart, more of whom survived.

And in having fewer children, mothers seemed to be able to invest more time and resources in those they did have.

“We found that by the time these children reached eight to 14, they had significantly higher cognitive functioning, were about a centimeter taller and were better educated” than those in the comparison group, says Tania Barham, an associate professor of economics who came to Boulder in 2005 to work with Menken and has written several papers on the Matlab project.

As families got smaller, public investments in education and public health went further.

And as local resources improved, the inclination for those adult children to leave declined. Barham’s research shows that sons of women in the family planning group were less likely to move away, and daughters were more entrepreneurial.

“Instead of moving away and taking a not-so-nice or dangerous job, they are staying closer to home and starting their own businesses,” Barham says.

Highlighting gender and race is effective when requesting career help

A lesson for the world?

Surprisingly, according to a study published this summer in the journal PNAS, the women in the family planning group were no healthier or richer 35 years after their participation. In fact, because they were slightly heavier, their metabolic health was slightly worse.

“I would have loved to have found that there was a long-term positive effect on their health, but I am a scientist,” Menken says. “I accept.”

Today, she notes, Bangladesh as a whole is undoubtedly healthier: Life expectancy is 72 years, up from 47. Infant mortality has declined to 2.6 percent. And nearly 100 percent of children complete primary school.

Family planning, while not a silver bullet, played no small role, she says.

At 81, she has no plans to retire anytime soon.

She intends to return to Bangladesh for more research when possible.

But she also believes other regions around the world, including places in sub-Saharan Africa, and even here in the United States, can benefit from the “basket-case-turned-economic-powerhouse.”

“Justice Ruth Bader Ginsburg once wrote that a woman’s ability to realize her full potential is intimately connected to her ability to control her reproductive life,” Menken says. “This study provides solid evidence to back up that statement.”