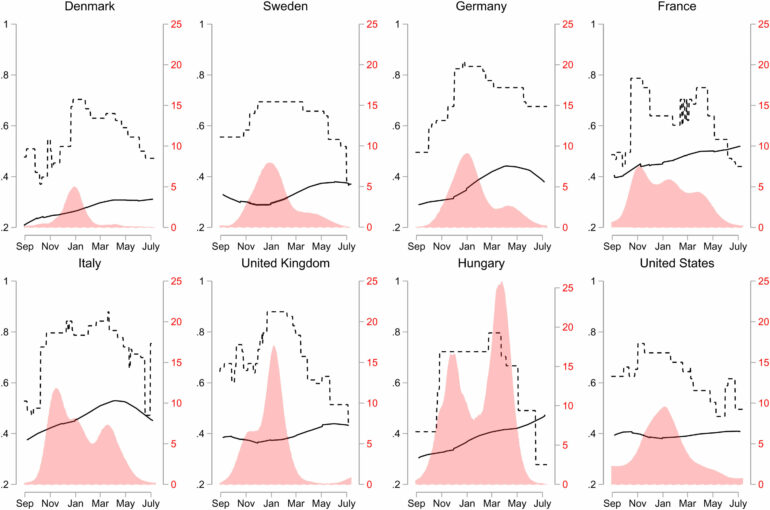 Many of us found it hard to keep up with official restrictions as the COVID-19 pandemic dragged on. We experienced pandemic fatigue. And this fatigue led to widespread political discontent in Western democracies, according to a new study from Aarhus University, which has now been published in the Proceedings of the National Academy of Sciences.

“Prior research has found that small groups of people have been radicalized and that pandemic fatigue has proven a health challenge, but our new study shows that we are facing challenges far beyond the domain of health or the radicalization of some groups,” says Michael Bang Petersen, professor of political science at Aarhus University and one of the researchers behind the study.

For instance, broad segments of the public respond that they support protests against the government’s policies, that they are concerned about their own democratic rights or that they believe the government is hiding important information from the public about the coronavirus.

Such political discontent is closely linked with the feeling of pandemic fatigue, according to the study.

Political and academic debate on ‘fatigue’

During the pandemic, both researchers and authorities have discussed the concept of pandemic fatigue and whether it exists in populations. For one thing, the British government was met with criticism for delaying their lockdown during the first wave of the pandemic based on the exact argument that restrictions could generate fatigue.

“Our results are important in this debate, because they demonstrate that citizens do experience fatigue during this type of crisis, in which the government imposes strict but often necessary measures on its citizens. And it turns out that loneliness during the pandemic in particular served to induce fatigue,” says Frederik Jørgensen.

The researchers have collected 13 rounds of data in Denmark, the United Kingdom, Germany, France, Italy, Hungary, Sweden and the United States. The surveys were fielded on a regular basis in 2020 and 2021, while the epidemic curves and restrictions in each country increased and decreased at different paces, some countries more burdened by the COVID-19 pandemic than others.

But there is a clear pattern across national borders: Fatigue increases as time goes by, when the stringency of restrictions goes up and when death numbers go down.

According to the researchers, the latter is significant in terms of adopting suitable policies. When death counts are high, citizens report lower levels of fatigue.

“Citizens are able to keep up with restrictions when these are necessary. This means there may be a sound basis for tightening and loosening restrictions as needed, instead of keeping them at a constant level as Germany and other countries did. By tightening and loosening restrictions, the authorities appear to be able to minimize pandemic fatigue and prevent it from sticking—and thus prevent political discontent from increasing even further,” says professor Michael Bang Petersen, who is head of the research project on the pandemic that this study is part of.

The head of the research project notes that several Western democracies were strained by polarization and destabilization even before the COVID-19 pandemic. He also notes that the world is facing a series of other crises which could add fuel to the fire. For instance the climate crisis and the current energy crisis.

“Citizens may feel fatigued and direct their frustrations towards the authorities in these crises as well. Fatigue during a crisis is something that the authorities should take very seriously and take active steps to avoid. One such step could be open communication that explains why action is necessary,” says professor of political science at Aarhus University Michael Bang Petersen.