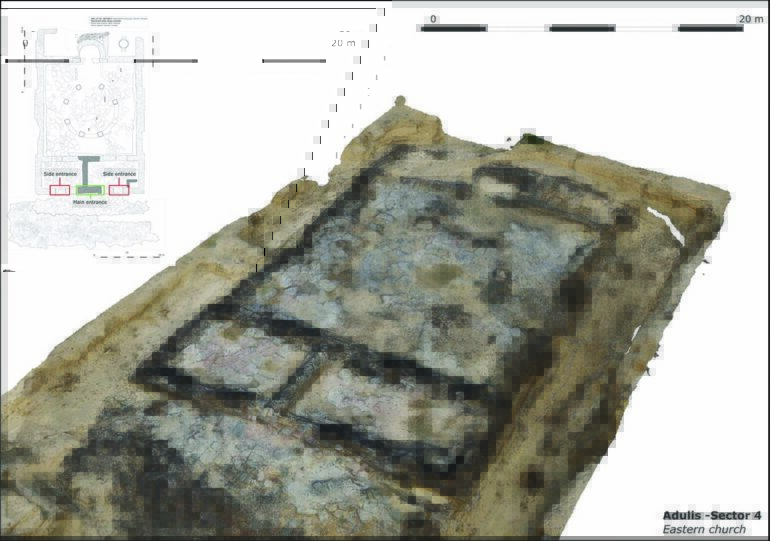 Archaeologists have made an important discovery in the Kingdom of Aksum, a major ancient power in Northeastern Africa, identifying two churches from shortly after the Aksumite’s conversion to Christianity. These are some of the first churches in the Kingdom reliably dated to this key period.

The Aksumite Kingdom ruled much of the northern Horn of Africa in the first millennium AD, stretching from Ethiopia to Arabia, and was an important contemporary of the Roman Empire. Like their Mediterranean neighbor, the Aksumite leader—King Ezana—converted to Christianity in the 4th century AD but securely dated churches from this period are rare.

However, two churches from the important Aksumite port of Adulis, in modern Eritrea, are helping fill this gap. One is an elaborate cathedral, complete with the remains of a baptistry, that is located near the center of the city and was first excavated in 1868. The other, first excavated in 1907, is in the east and features a ring of columns that show it once had a dome.

Over a hundred years since these churches were first excavated, archaeologists are re-examining these buildings with modern techniques. Dr. Gabriele Castiglia, from the Pontificio Istituto di Archeologia Cristiana, is part of a team digging them back up and carrying out radiocarbon dating on the site. This new data has allowed them to accurately reconstruct their history, with their findings published in the journal Antiquity.

“This study provides one of the first examples of Aksumite churches excavated with modern methods and chronological data coming from modern dating methods,” said Dr. Castiglia.

The research revealed construction began on the cathedral between AD 400–535, whilst the domed church was built AD 480–625. This makes them some of the earliest securely dated churches in the Aksumite Kingdom, and the oldest known outside the capital’s heartlands. This shows a relatively rapid spread of Christianity through the Kingdom of Aksum.

“Having a precise chronology for these churches is key to understanding how the process of conversion to Christianity shaped the geographical and cultural area,” said Dr. Castiglia.

Crucially, the buildings show that the spread of Christianity was not the result of a single factor, like a mandate by King Ezana. The churches have elements from many traditions, reflecting the diverse influences on the kingdom’s conversion. The domed church, for example, is unique in the Aksumite Kingdom and appears to be inspired by Byzantine churches. Meanwhile, the cathedral is built on a large platform in the Aksumite tradition.

The churches can also shed light on the later arrival of Islam. Adulis underwent a period of gradual decline and the churches eventually fell into disuse. Dr. Castiglia found that this was not the end of their lives –the cathedral was re-appropriated as a Muslim burial ground. The continued use of existing sacred spaces could indicate the region’s conversion to Islam was also a multicultural phenomenon, with local customs mixed in with the new religion.

“This is one of the first times we have the material evidence of re-appropriation of a Christian sacred space by the Islamic community,” said Dr. Castiglia.

When using virtual reality as a teaching tool, context and ‘feeling real’ matter

Together, these buildings show the religious history of the Horn of Africa was cosmopolitan, with diverse groups influencing the spread of beliefs.

More information:
Gabriele Castiglia, An archaeology of conversion? Evidence from Adulis for early Christianity and religious transition in the Horn of Africa, Antiquity (2022). DOI: 10.15184/aqy.2022.136