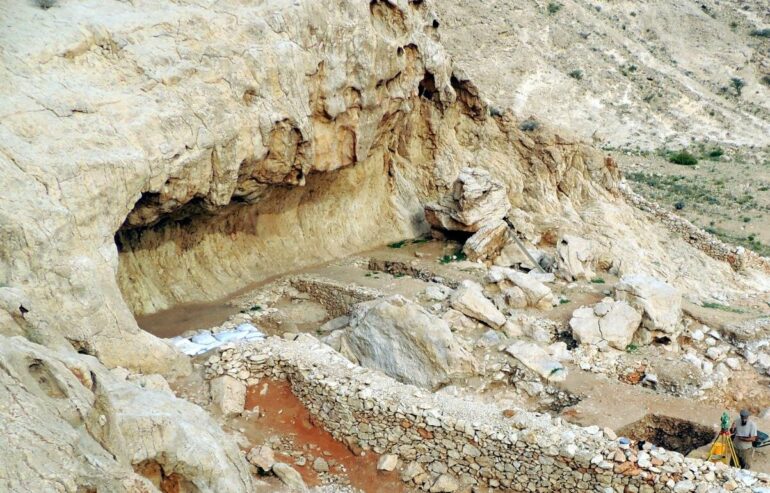 An international team of researchers from the Sharjah Archaeology Authority/United Arab Emirates (UAE) and the Universities of Tübingen and Freiburg as well as Oxford Brookes/England led by Dr. Knut Bretzke from the University of Tübingen and Prof. Dr. Frank Preusser from the Institute of Earth and Environmental Sciences at the University of Freiburg has uncovered startlingly new results that show Paleolithic humans repeatedly occupied the rock shelter site of Jebel Faya in Southern Arabia between 210,000 and 120,000 years ago; shattering previously held ideas about when, and how, humans first moved into Arabia from Africa. The researchers have published their findings in the current issue of Scientific Reports.

Jebel Faya, located in Sharjah, UAE, is one of the most important Paleolithic sites in Arabia. In 2009 excavations revealed human occupation dating back to 125,000 years ago making it the then oldest known human site in Arabia. New archaeological data from Jebel Faya, published in Scientific Reports, indicates that human settlement in Southern Arabia occurred under an unexpected range of climatic conditions and significantly earlier than previously thought.

Humans were not dependent on favorable climatic conditions

Previously it has been argued that Arabia was closed to prehistoric humans during dry climate phases and that humans had to wait for periods of more wet climatic conditions in order to expand into the region. The new results contradict this view, and show humans were far more adaptable than previously thought and not reliant on extended periods of favorable climate conditions to thrive.

Using a cutting-edge range of archaeological, palaeoclimatological and dating techniques, the team were able to reconstruct four distinct phases of human occupation between 210-120,000 years ago. Crucially this demonstrates that humans occupied the site during dry and wetter climate events—challenging previous ideas about when humans could and could not occupy Arabian sites during the Paleolithic and opening up the possibility that Arabia may yet yield more evidence of the human journey out of Africa during drier phases.

Re-evaluate interactions between humans and the environment

Dr. Knut Bretzke commented: “Most exciting for me personally is that our data provide first evidence for human occupation of Arabia about 170,000 years ago. This period is traditionally thought to be characterized by extremely dry conditions that must have prevented human presence in Arabia. We think that the unique interplay of human behavioral flexibility, the mosaic landscapes of South-East Arabia and the occurrence of brief spells of more humid conditions enabled the survival of these early human groups. To study the details of this interplay and the evolution of the human-environment interdependencies, Jebel Faya and its surroundings are the key area and I am convinced that more surprises will come.”

Prof. Adrian Parker, Oxford Brookes University, who led the reconstruction of the palaeoenvironments, noted that “Our data challenges previous assumptions that human occupation in Arabia was only confined to well-defined wetter climate phases. Understanding the environmental context is paramount when evaluating human occupation. Well constrained evidence in Arabia is still limited and the complex interrelationships between humans, climate, and environment need careful re-evaluation especially in the light of our findings”.

The Freiburg geologist Frank Preusser, who dated the phases of human occupation, said: “The fact that luminescence dating allows to determine time of the last daylight exposure of quartz grains embedded in sediment layers has revolutionized archaeological research. The study from Jebel Faya is another milestone in enlightening the complex history of our species.”