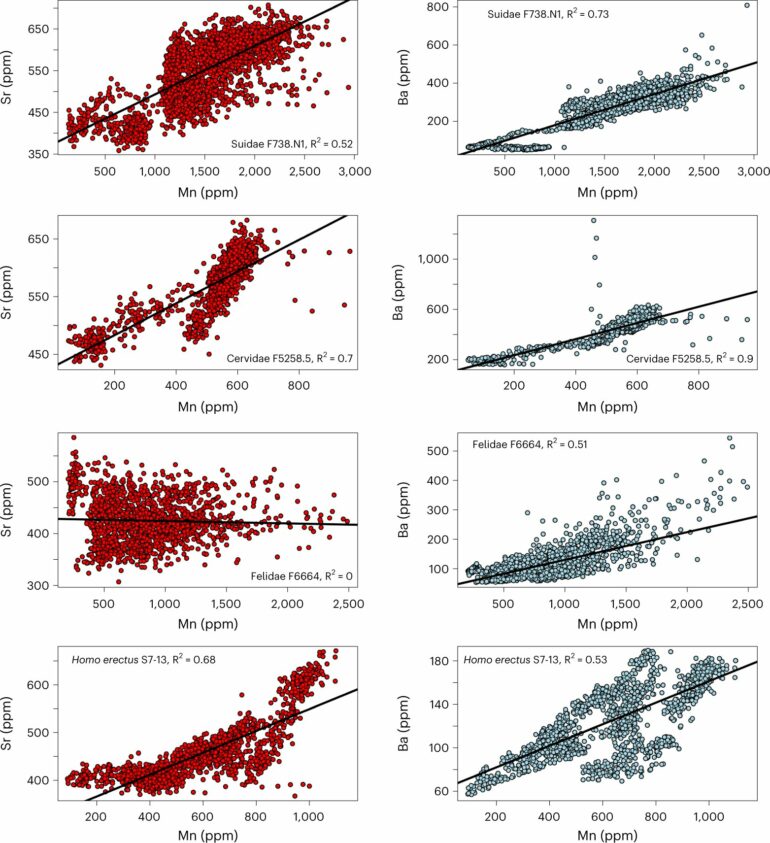 If you take a magnifying glass and a flashlight and look at your teeth very carefully in the mirror, in places you can spot a pattern of fine, parallel lines running across your teeth. These correspond to the striae of Retzius that mark the growth of our tooth enamel. Enamel starts forming in the womb and continues to mineralize until adolescence, when the last milk teeth fall out and are replaced by permanent ones.

Like in all land-dwelling vertebrates, tooth enamel mineralizes gradually in microscopically thin layers in humans too, represented by the striae of Retzius. The speed with which a human develops can be read from these Retzius lines. Physiological changes, such as birth, weaning or illness, for example, leave distinctive traces. The striae of Retzius also form the chronological framework for the chemical composition of tooth enamel, which in turn reflects changes in the diet of that individual.

By studying their teeth, an international team of scientists from Goethe University Frankfurt led by Professor Wolfgang Müller and his MSc student Jülide Kubat, now a doctoral candidate at Université Paris Cité, compared the dietary habits of an ancestor of modern humans—Homo erectus, “the upright man”—with those of contemporaneous orangutans and other animals. These all lived during the Pleistocene Epoch 1.4 million to 700,000 years ago on the Indonesian island of Java, which at that time was characterized by monsoonal rainforests as well as open treescapes and grassy savannahs.

In order to analyze the tooth enamel, the researchers embedded the teeth in resin and then cut them into wafer-thin slices some 150 micrometers thick. These extremely precious tooth samples are part of the Gustav Heinrich Ralph von Koenigswald Collection at the Senckenberg Research Institute and Natural History Museum Frankfurt, a permanent loan from the Werner Reimers Foundation.

In turn, they used a special laser to ablate material from the thin slices, which was chemically analyzed with a mass spectrometer for, among other elements, strontium and calcium, which are found in both bones and teeth (Laser Ablation Inductively Coupled Plasma Mass Spectrometry (LA-ICPMS)). The ratio of strontium to calcium (Sr/Ca) depends on the diet, explains Wolfgang Müller: “Strontium is gradually excreted by the body—as an impurity of the vital calcium, so to speak. In the food chain, this leads to a continuous decrease in the strontium-calcium (Sr/Ca) ratio from herbivores to omnivores to carnivores.”

The teeth of the hominids orangutan and Homo erectus were really exciting because here the researchers discovered annual cycles during which the dietary composition of great apes and humans changed: both showed variations during the years, but the regular Sr/Ca peaks were much more pronounced for the orangutan than for Homo erectus.

Jülide Kubat, first author of the publication, explains, “These peaks indicate an abundant supply of plant food in the wet season, during which the rainforest, for example, produced many types of fruit. During the dry season, orangutans switched to other food sources, which may have included insects or eggs. By contrast, Homo erectus, as an omnivore and occasional carnivore, was less dependent on seasonal food supply—as indicated by the less pronounced peaks and lower Sr/Ca values.”

Overall, says Müller, their research shows that high spatial-resolution laser analysis of trace elements, together with tooth enamel chronology, can provide remarkably detailed temporal insights into the life history of our ancestors: “Suddenly, you feel very close to these early humans who lived such a long time before us. You can sense what it might have meant to them when the season changed and how they interacted with their world. That’s absolutely fascinating.”

The work is published in the journal Nature Ecology & Evolution.