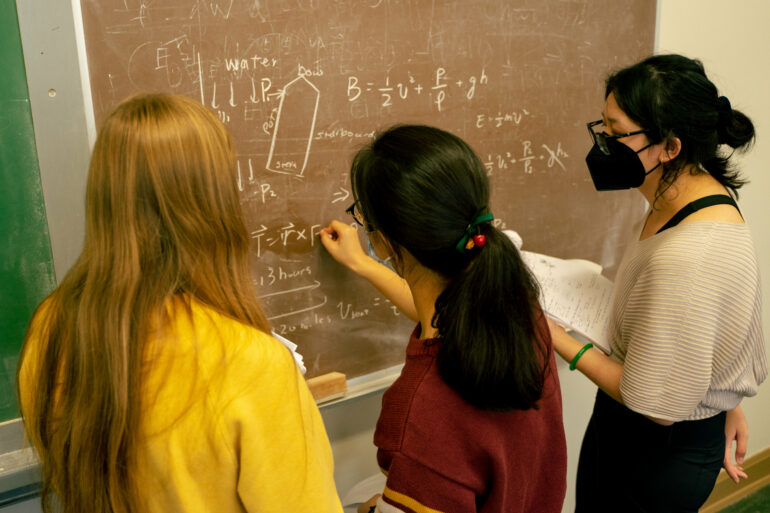 Before the COVID-19 pandemic abruptly shut down labs and sent scientists home to work, female astronomers on average published about nine papers for every 10 published by men—a rate that has remained stagnant for decades.

The pandemic appears to have worsened that gender imbalance.

In a paper appearing today in the journal Nature Astronomy, two cosmologists—Vanessa Böhm of the University of California, Berkeley, and Jia Liu of the Kavli Institute for the Physics and Mathematics of the Universe (Kavli IPMU) in Japan—report their analysis of publication rates in the field of astronomy pre-pandemic and as of February 2022, two years into the pandemic.

They found that, while both men and women on average have published more papers since March 2020, when most universities and research institutions closed their doors to prevent the spread of COVID-19, men published a greater number, widening the gender gap. Worldwide, astronomy publications increased by about 13%.

Part of the increase was from publications by new researchers entering the field, Böhm said, though that was caused primarily by an uptick in new researchers publishing in Asia: Japan, Taiwan and China, primarily. In most other countries, though, fewer new researchers published in the field of astronomy during the pandemic, with women lagging behind men. About 25% of new authors are women, a percentage that also hasn’t budged in the past 10 years.

“A decrease in the number of first-time authors indicates barriers for young researchers to enter the field or complete their first projects,” Böhm noted.

When the two looked only at papers by veteran astronomers, however, publications per researcher still were higher than pre-pandemic trends.

Presumably, both men and women were able to devote more time to writing papers during the pandemic because they were not allowed access to research facilities, such as observatories, to obtain new data. With more time, including relief from in-person administrative duties, the pandemic was ideal for finishing off deferred projects.

“While one may assume that COVID has mostly negative impacts on the world, this positive phenomenon may not be hard to understand: COVID-induced changes, such as increased flexibility in work arrangements, reduced commutes and business trips, as well as improved virtual technologies, among others, are potentially favorable for conducting scientific research,” Liu said.

The widened gap between men and women’s productivity echo those of other studies that show women regressed, in terms of workplace equity, during the pandemic. While the current study does not address why, some of these other studies found that women, more than men, were saddled with child care and elder care, allowing less time for writing up research results.

Böhm suspects an additional reason: less mentoring of young female astrophysics researchers who may be dealing with “imposter syndrome,” or the idea that they may not be up to par. Women make up only about 20% of the world’s astronomers.

“There are a lot of confidence barriers for young women in the field that are holding them back,” she said.

Liu was a postdoctoral fellow at the Berkeley Center for Cosmological Physics (BCCP) when the pandemic began and was one of those affected by the sudden loss of child care. With a toddler at home and on the hunt for an academic job, she and her husband had to move away from Berkeley to find affordable child care.

“As a new mother and an early career scientist, my life has been heavily affected by the pandemic –– lost child care, dropped productivity, disconnection from my colleagues and a tough job market,” said Liu, who in 2021 joined the Kavli IPMU in Tokyo as a project associate professor. “While rebuilding my research and life routines, I couldn’t stop wondering, ‘How are others in my field affected by the pandemic? Am I alone?'”

Böhm, also a postdoctoral fellow, met Liu at BCCP, and they decided to embark on what they called an “all-girls” research project to look at the history of publishing rates in astronomy by gender and country, which had never been done comprehensively, and the impact of the pandemic on those rates.

Their study looked at data from 1950 until February 2022. The computational cosmologists used their data mining skills to download more than 1.2 million records of astronomical publications. They wanted to analyze publication patterns by gender and country, but such information is confidential. So, the researchers assigned a gender probability to each author based on the individual’s given name and assigned a country based on the author’s affiliation or affiliations listed in their paper.

“When we counted the average number of papers each researcher produced, we saw boosted individual productivity across most countries. Meanwhile, a decreasing number of incoming new researchers is seen in most of the countries we studied. This result indicates larger barriers for new researchers to enter the field, or for junior researchers to complete their very first project during COVID,” said Liu.

They also looked at researchers who had not published in the field of astronomy for the past two years, and found that the chance is about 87% that they will not never publish in the field again. People dropping out of the field also disproportionately affects women.

That includes Böhm herself. With her postdoctoral felliowship now ending, she has elected to apply her data analysis skills elsewhere. She is joining a start-up that uses machine learning-based predictions to reduce fuel waste in the ocean shipping industry.

“This paper was part of an interest shift that I’ve had—to go to use the skills that I’ve learned in the last couple of years on more earthbound topics. I’m a little bit more driven these days by what’s actually going to make a change here on Earth,” she said.