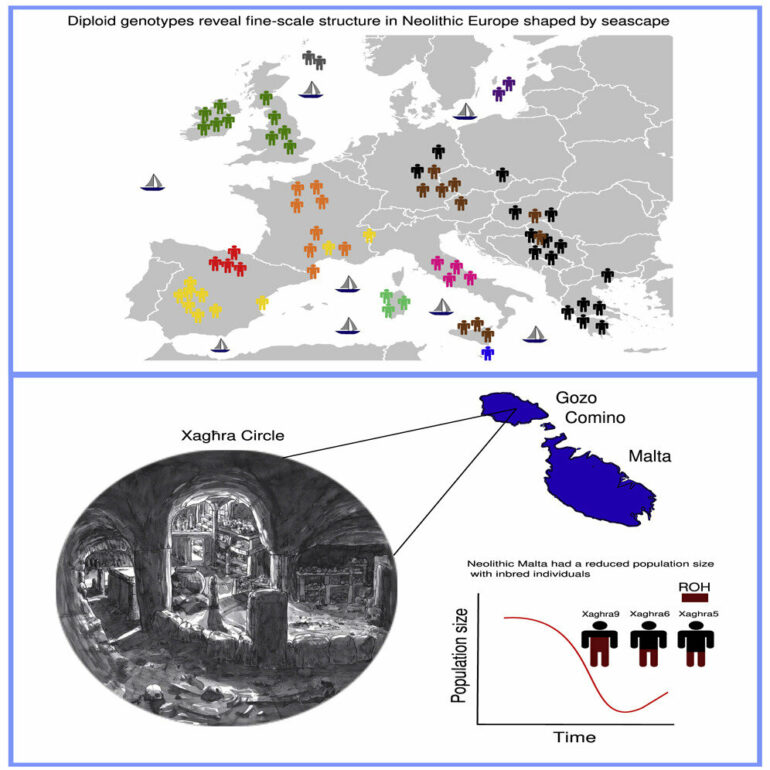 Trinity scientists, along with international colleagues, have explored the importance of sea travel in prehistory by examining the genomes of ancient Maltese humans and comparing these with the genomes of this period from across Europe. Previous findings from the archaeological team had suggested that towards the end of the third millennium BC the use of the Maltese temples declined.

Now, using genetic data from ancient Maltese individuals the current interdisciplinary research team has suggested a potential contributing cause. Researchers found that these ancient humans lacked some of the signatures of genetic changes that swept across Europe in this period, because of their island separation. Scientists concluded that physical topography, in particular seascapes played a central role as barriers to genetic exchange.

The study is just published in the journal Current Biology.

Researchers found these Mediterranean islanders were unusual for their time. They showed evidence of inbreeding in their family history, a sign of small, restricted population size indicating genetic isolation. Interestingly researchers found that one of the ancient individuals analyzed was the offspring of second-degree relatives. This was an outstanding find as the number of highly inbred individuals is very low even in ancient times, and this is the second most inbred individual yet detected from the Neolithic world.

Scientists in the ancient DNA laboratory in Trinity sequenced the genomes of ancient (4,500–5,000 yrs old) Maltese humans from the collective cave burials at the Xaghra Circle and compared these with genomes of contemporary groups from around Europe. Trinity collaborated with colleagues from Queen’s University Belfast, the University of Cambridge, the Superintendence of Cultural Heritage Malta and others on the study (see below).

Scientists recreated the genetic geography across the whole of Europe at the time of the earliest farmers. They found evidence that it was fundamentally shaped by its seascapes which include barriers distinguishing Ireland and Britain from the continental mainland, and especially distinguishing the populations from the Scottish Orkney islands. These examples are powerful illustrations of genomic insularity. For genes at least, the seaways were more retardant than accelerant of connection.

The first settlers in the Maltese islands were Neolithic, dated by Queen’s University from the sixth millennium BC. Communities developed through a series of cultural phases, with some material indications of external connectivity. Maltese culture flourished from 3600 BC with distinctive craft and architecture only found on the islands. One example was the development of elaborate mortuary structures, such as the Xaghra circle, Gozo. This monumentalized underground tomb yielded the remains of hundreds of individuals and underwent remodeling and enlargement until around 2500 BC when it was abandoned, possibly as part of a wider population decline or replacement.

To examine the demography of Late Neolithic Malta, scientists sequenced genomes from this burial site. The elucidation of fine structure among closely related groups such as European Neolithic populations is challenging, and requires a fine scale genetic analysis. Therefore, to examine these in a wider context, the team additionally imputed genome wide diploid genotypes from published ancient genomes and assessed long chunks of genomes shared within and between genomes to estimate genetic geography and demographies across Neolithic Europe.

A high resolution picture of the genetic background of ancient human populations allowed scholars to unveil their history, relatedness and migration. For example, it was discovered that ancient Neolithic people from Malta experienced an unusual drop in their size perhaps because of external factors such as the deterioration of the local environment and economy. Moreover, the genetic structure of modern human populations in Europe was mostly already present in the ancient communities that lived thousands of years ago. This discovery will surely open new questions about seafaring in ancient times.

Bruno Ariano, Ph.D. student at Trinity College Dublin, now also Senior Bioinformatician at Open Target and first author of the study said: “Was the sea a barrier or a highway in connecting regions during ancient times? Our research shows that seafaring increased the differentiation between populations from islands and mainland Europe. Thanks to the analysis of hundreds of ancient genomes we discovered a level of structure among populations that correlates with their geographic location. This unprecedented level of resolution will most likely lead to new theories about migration and seafaring.”

“The builders of the temples of prehistoric Malta showed enormous resilience and creativity for over a thousand years, as confirmed by a detailed dating program at Queen’s Belfast. The new biological evidence demonstrates that they were also challenged by the maritime distance of their island home.”

In a first, coin bearing zodiac found off Israel’s coast

“For the first time, we have a scientific understanding of the scale of prehistoric society in Malta. These results suggest that small communities were closely associated with the guardianship of the famous temples.”


Citation:
How seascapes of the ancient world shaped the genetic structure of European populations (2022, May 20)