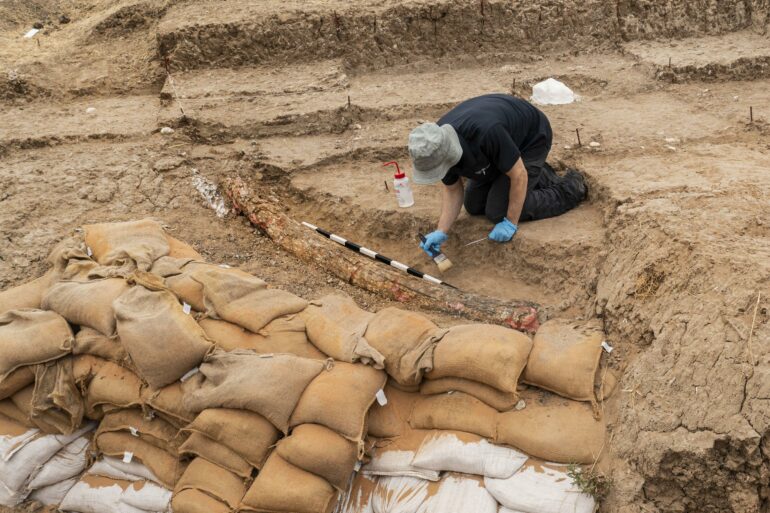 Israeli archaeologists recently unearthed the titanic tusk of a prehistoric pachyderm near a kibbutz in southern Israel, a remnant of a behemoth once hunted by early people around half a million years ago.

The Israel Antiquities Authority announced Wednesday that the 2.5-meter (yard) long fossil belonging to the long-extinct straight-tusked elephant was found during a joint excavation with researchers from Tel Aviv University and Ben-Gurion University.

Israel Antiquities Authority prehistorian Avi Levy, who headed the dig, said it was “the largest complete fossil tusk ever found at a prehistoric site in Israel or the Near East.”

The site was dated to the late lower paleolithic period, around 500,000 years ago, based on stone tools found in the vicinity, the antiquities authority said.

Omry Barzilai, an IAA archaeologist, said the find was “very puzzling, very enigmatic” because it was not clear whether ancient people hunted the behemoth on the spot or whether they brought the felled animal’s tusk to this spot.

The tusk was found near a kibbutz on the central plain running parallel to Israel’s Mediterranean coast. But half a million years ago, when the ancient elephant died, the now-arid terrain was likely a swamp or shallow lake, an ideal habitat for ancient hominids.

Where do the ingredients for your chocolate, smartphone and clothes come from?