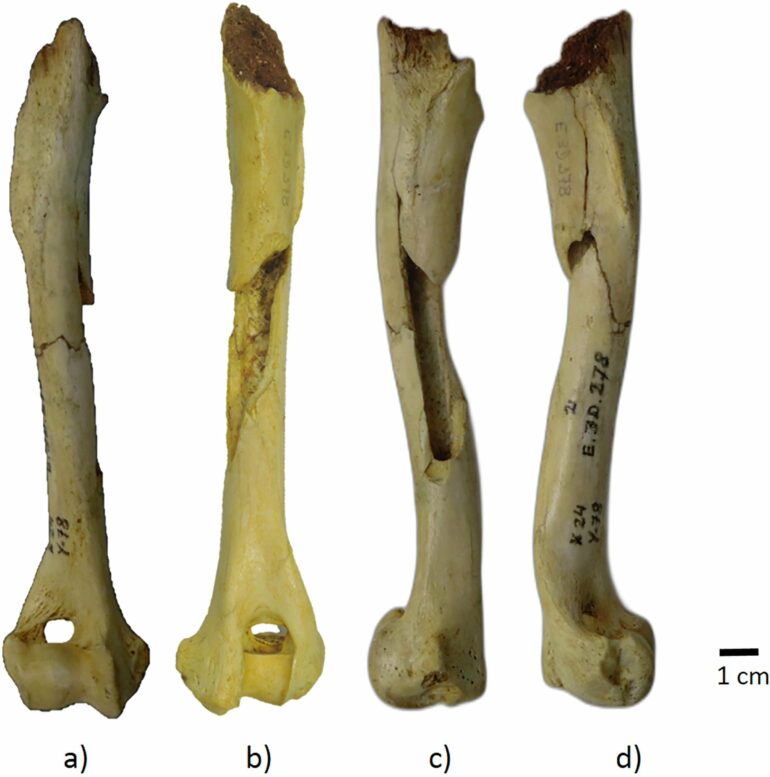 A humerus analyzed by the UPV/EHU’s Human Evolutionary Biology group belonged to a specimen that lived in the Paleolithic period, 17,000 years ago

The dog is the first species domesticated by humans, although the geographical and temporal origin of wolf domestication remains a matter of debate. In an excavation led by Jesus Altuna in the Erralla cave (Zestoa, Gipuzkoa) in 1985 an almost complete humerus was recovered from a canid, a family of carnivores that includes wolves, dogs, foxes and coyotes, among others. At that time it was difficult to identify which species of canid it belonged to.

Now the Human Evolutionary Biology team at the University of the Basque Country (UPV/EHU), led by Professor Conchi de la Rúa, has carried out an in-depth study of the bone remains. A morphological, radiometric and genetic analysis has enabled the species to be identified genetically as Canis lupus familiaris (domestic dog).

The direct dating of the humerus by means of carbon-14 using particle accelerator mass spectrometry gives it an age of 17,410–17,096 cal. BP, (calibrated years Before Present, i.e. the results obtained are adjusted to take into account changes in the global concentration of radiocarbon over time). That means that the Erralla dog lived in the Magdalenian period of the Upper Paleolithic, which makes it one of the most ancient domestic dogs to have existed so far in Europe.

The Erralla dog shares the mitochondrial lineage with the few Magdalenian dogs analyzed so far. The origin of this lineage is linked to a period of cold climate coinciding with the Last Glacial Maximum, which occurred in Europe around 22,000 years ago.

“These results raise the possibility that wolf domestication occurred earlier than proposed until now, at least in western Europe, where the interaction of Paleolithic hunter-gatherers with wild species, such as the wolf, may have been boosted in areas of glacial refuge (such as the Franco-Cantabrian) during this period of climate crisis,” explained Conchi de la Rúa, head of the Human Evolutionary Biology group.

The research was published in the Journal of Archaeological Science: Reports.

Provided by
University of the Basque Country


Citation:
One of Europe’s most ancient domestic dogs lived in the Basque Country (2022, November 28)