People listen to streamed music during specific blocks of time 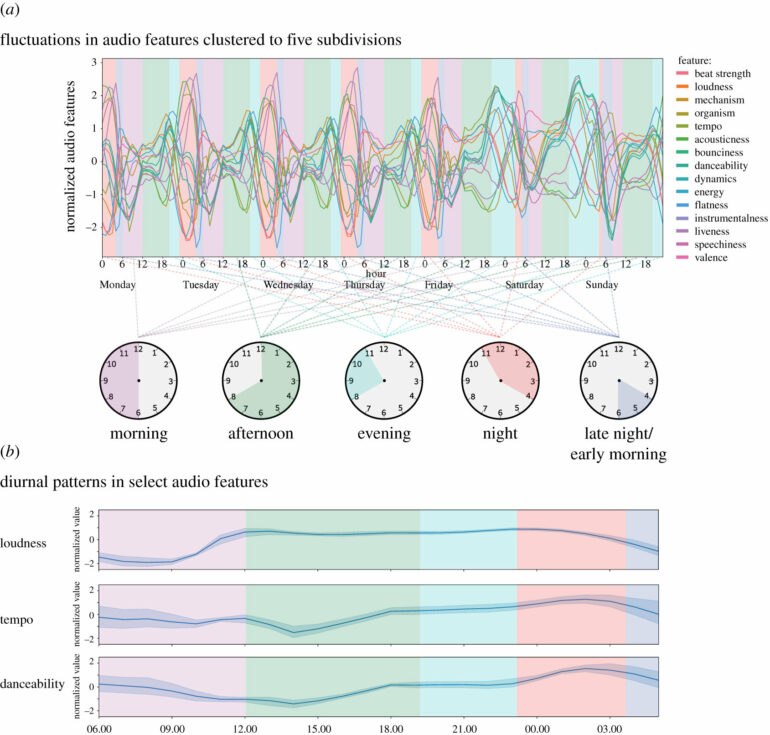 A trio of researchers at Aarhus University and The Royal Academy of Music Aarhus/Aalborg has found that people who listen to streamed music on online services such as Spotify tend to do so during the same specific blocks of time each day—though there is more variation on the weekends. In their paper published in the journal Royal Society Open Science, Ole Adrian Heggli, Jan Stupacher and Peter Vuust describe findings of their analysis of data from Spotify.

Over the past several decades, the act of listening to music has changed as playing technology has changed, from phonographs to tape decks, CDs, and now, digital players. In this new effort, the researchers wondered about the listening habits of Spotify subscribers, most of whom listen using their smartphones. To learn more, they obtained and analyzed over 2 billion data points from the streaming service.

The researchers identified a pattern—people on Spotify listened to music during different but specific blocks of time. They found that there were five such time blocks: during the morning, in the afternoon, later in the evening, at night, and late at night on into early morning. Interestingly, the time blocks were similar across the Spotify user base. Not everyone was listening to the same tracks, of course, or even the same genre, but there were some other notable patterns. People tended to have the volume lower first thing in the morning, for example, and then turned it up as their morning went on. Most tended to leave the volume higher until they reached their nighttime block. They also found that the tempo of the music people were listening to was slow during the day but then picked up at night, eventually morphing into music fit for dancing.

The researchers also conducted an experiment that allowed them to track the playing habits of 89 known volunteers. Data from that experiment revealed that users were more likely to listen to playlists they created themselves rather than taking advantage of those created by Spotify’s algorithms. They were not able to detect patterns in such playlists, however. They conclude by suggesting musical preference and playing habits for regular music listeners tends to lead to cyclical listening patterns.