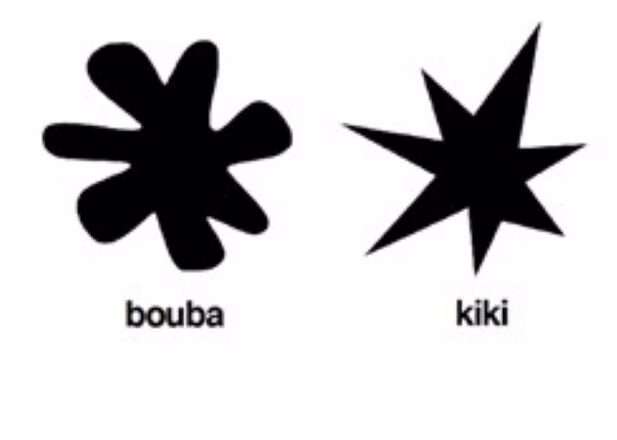 Most people around the world agree that the made-up word ‘bouba’ sounds round in shape, and the made-up word ‘kiki’ sounds pointy—a discovery that may help to explain how spoken languages develop, according to a new study.

Language scientists have discovered that this effect exists independently of the language that a person speaks or the writing system that they use, and it could be a clue to the origins of spoken words.

The research breakthrough came from exploring the ‘bouba/kiki effect,’ where the majority of people, mostly Westerners in previous studies, intuitively match the shape on the left to the neologism ‘bouba’ and the form on the right to ‘kiki.’

An international research team has conducted the largest cross-cultural test of the effect, surveying 917 speakers of 25 different languages representing nine language families and ten writing systems—discovering that the effect occurs in societies around the world.

Publishing their findings today in Philosophical Transactions of the Royal Society B, the team, led by experts from the University of Birmingham and the Leibniz-Centre General Linguistics (ZAS), Berlin, says that such iconic vocalizations may form a global basis for the creation of new words.

Co-author Dr. Marcus Perlman, Lecturer in English Language and Linguistics at the University of Birmingham, commented: “Our findings suggest that most people around the world exhibit the bouba/kiki effect, including people who speak various languages, and regardless of the writing system they use.”

“Our ancestors could have used links between speech sounds and visual properties to create some of the first spoken words—and today, many thousands of years later, the perceived roundness of the English word ‘balloon’ may not be just a coincidence, after all.”

The ‘bouba/kiki effect’ is thought to derive from phonetic and articulatory features of the words, for example, the rounded lips of the ‘b’ and the stressed vowel in ‘bouba,’ and the intermittent stopping and starting of air in pronouncing ‘kiki.’

To find out how widespread the bouba/kiki effect is across human populations, the researchers conducted an online test with participants who spoke a wide range of languages, including, for example, Hungarian, Japanese, Farsi, Georgian, and Zulu.

The results showed that the majority of participants, independent of their language and writing system, showed the effect, matching ‘bouba’ with the rounded shape and ‘kiki’ with the spiky one.

Co-author Dr. Bodo Winter, Senior Lecturer in Cognitive Linguistics at the University of Birmingham, commented: “New words that are perceived to resemble the object or concept they refer to are more likely to be understood and adopted by a wider community of speakers. Sound-symbolic mappings such as in bouba/kiki may play an important ongoing role in the development of spoken language vocabularies.”

Iconicity—the resemblance between form and meaning—had been thought to be largely confined to onomatopoeic words such as ‘bang’ and ‘peep,’ which imitate the sounds they denote. However, the team’s research suggests that iconicity can shape the vocabularies of spoken languages far beyond the example of onomatopoeias.

The researchers note that the potential for bouba/kiki to play a role in language evolution is confirmed by the evidence they collected. It shows that the effect stems from a deeply rooted human capacity to connect speech sound to visual properties, and is not just a quirk of speaking English.