Rare boomerang collection from South Australia reveals a diverse past 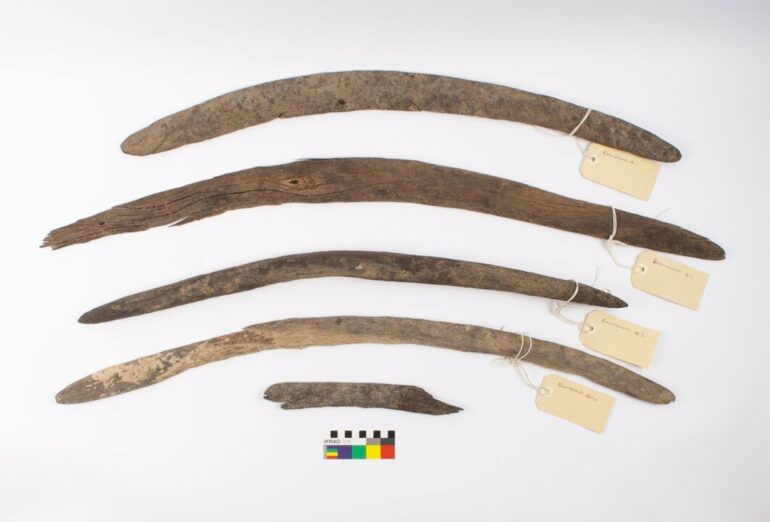 The four boomerangs and one wooden fragment were discovered in the creek bed during drought conditions in 2017 and 2018 by Jason Litherland from National Parks and Wildlife South Australia and Katheryn Litherland, a traditional owner.

The project to analyze the artifacts was a collaborative venture initiated by the Yandruwandha Yawarrawarrka Traditional Landowners (Aboriginal Corporation).

They partnered with Australian Heritage Services, Flinders University and the Australian Nuclear Science and Technology Organisation to carefully document the objects and to conduct radiocarbon dating to determine their ages.

The results of radiocarbon dating revealed that the boomerangs range in age from circa 1650–1830 AD, a time that spans the two centuries leading up to European incursions into the region by explorers such as Sturt, Burke, and Wills.

“The assemblage reveals a variety of form and function representative of the diverse cultural activities and daily lives of the Aboriginal people who lived near significant waterholes in the Cooper Creek region during this period,” said Professor Amy Roberts of Flinders University.

The authors concluded that in addition to their likely use as projectiles, the boomerangs were probably used for fighting, hunting, digging, fire management and possibly in ceremonies.

“This range of activities goes well beyond the stereotype of the returning boomerang known to most Australians,” said co-author Dr. Daryl Wesley from Flinders University.

“For Yandruwandha and Yawarrawarrka people, the finds provide another example of how their Country continues to tell the stories of their ancestors, as well as affording a tangible connection to the knowledge passed down from their families,” said Joshua Haynes, a Yandruwandha Yawarrawarrka traditional owner and co-author.

“We will continue to protect and preserve our artifacts on Country, that’s what our ancestors would want us to do. When you see them old people in whirly winds you know they are here watching and protecting our Country,” said Katheryn Litherland, a Yandruwandha Yawarrawarrka traditional owner and co-author.

Predictions for climate change in the region threaten to alter the conditions that allowed the preservation of these artifacts, which may affect the potential survival of other wooden objects that remain in the environment.