‘Rough’ words feature a trill sound in languages around the globe 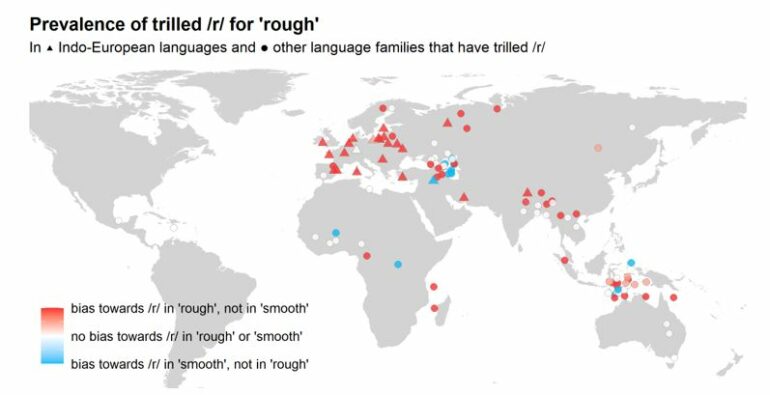 In languages spoken around the world, words describing rough surfaces are highly likely to feature a “trilled /r/” sound—a linguistic pattern that stretches back over 6,000 years, a new study reveals. The international team of researchers from the University of Birmingham, Radboud University, and the University of British Columbia has published its findings in Scientific Reports.

Language scientists first analyzed words for “rough” and “smooth” in a worldwide sample of 332 spoken languages—discovering a strong link between the sounds of speech and the sense of touch, which has influenced the structure of modern languages.

Next, they found that the “/r/-for-rough” pattern is prevalent across sensory words in 38 present-day Indo-European languages. It can even be traced to the reconstructed roots of Proto-Indo-European—indicating that the pattern has likely existed in this large language family for more than six millennia.

Co-author Mark Dingemanse, Associate Professor in Language and Communication at Radboud University, commented, “On their own, any of these patterns would be quite striking, but taken together, they demonstrate a deep-rooted and widespread association between the sounds of speech and our sense of touch.”

“Our findings reveal that the link between ‘/r/’ and roughness comes naturally to us, making the association more likely to surface and to stick around as words evolve over time.”

Co-author Bodo Winter, Senior Lecturer in Cognitive Linguistics at the University of Birmingham, commented, “This is one of the most widespread examples so far of cross-modal iconicity in spoken languages—linking the sounds of speech to the sense of touch. Such cross-modal associations can play a significant role in shaping the forms of spoken words in natural languages—showing that many aspects of language structure are shaped by the human ability to spot and use perceptual analogies that create iconic links between form and meaning.”

To fight extreme poverty, empower women with more than cash


Citation:
‘Rough’ words feature a trill sound in languages around the globe (2022, January 20)