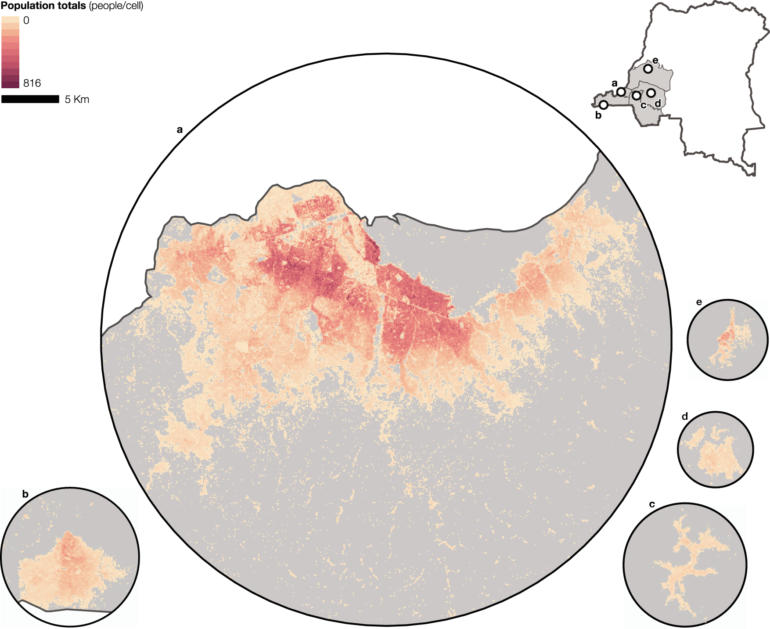 Geographers at the University of Southampton have produced high resolution population maps of the Democratic Republic of the Congo (DRC) nearly 40 years after its last population and housing census. The study is the latest in a number aimed at supporting countries with outdated or incomplete census data.

Researchers at WorldPop combined building footprints derived from satellite imagery and recent small-scale household census surveys to model population counts and age and sex structures at high resolution in multiple provinces of the DRC—a country where the last national census was completed in 1984.

The team, in collaboration with the DRC National Institute of Statistics and the universities of Columbia, California and North Carolina, concentrated on the western provinces of Kinshasa, Kongo Central, Kwango, Kwilu and Mai-Ndombe. Part of their work involved conducting field surveys of some 80,000 people living across small areas of approximately three settled hectares in the five provinces, which are each about the size of a small to medium-size European country.

WordPop Director, Professor Andy Tatem explains: “Household surveys give us a lot of information about people’s demographic characteristics and settings in which they live. On-the-ground micro-census surveys combined with building footprints and a range of other mapped data derived from satellite imagery allow us to estimate how many people live in a particular area. We then use sophisticated statistical modeling techniques to provide an accurate picture of the population’s distribution across a larger area.

“National censuses are crucial for helping governments plan public health programs, infrastructure projects and government services, but instability, disease outbreaks and a lack of resources can all play a part in making them challenging to conduct. While the breadth and depth of a full census can’t be replaced, these methods, at a fraction of the cost, can help governments make crucial decisions with accurate and contemporary data, at a fine scale, in areas that would not otherwise be surveyed.”

Similar work has been undertaken by WorldPop as part of the GRID3 program in South Sudan, accounting for the displacement of people; Zambia and Nigeria, aiding the distribution of vaccines, including for COVID-19; and Burkina Faso, to complement the country’s 2019 census.

The methods and outputs of this study have been extended to an additional seven provinces in the eastern part of, and are being used by health authorities in the country to help with the planning of routine immunizations for children.

The paper is published in the journal Nature Communications.

Bioarchaeological evidence of very early Islamic burials in the Levant