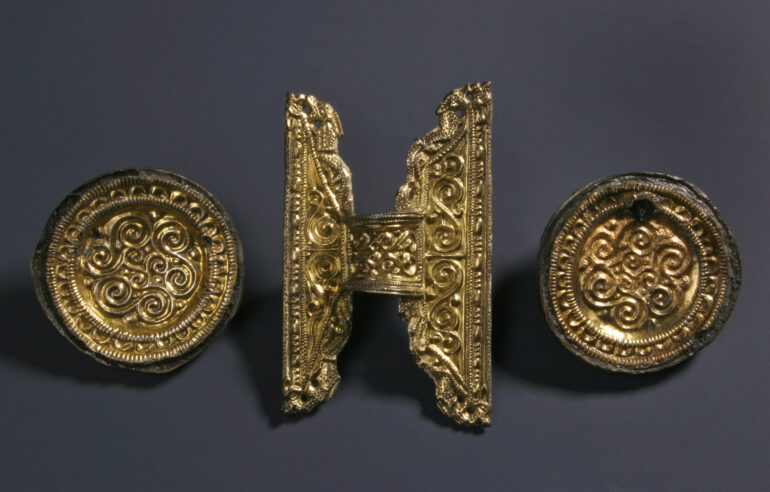 Almost 300 years after the Romans left, scholars like Bede wrote about the Angles and the Saxons and their migrations to the British Isles. Scholars of many disciplines, including archaeology, history, linguists and genetics, have debated what his words might have described, and what the scale, the nature and the impact of human migration were at that time.

New genetic results now show that around 75% of the population in Eastern and Southern England was made up of migrant families whose ancestors must have originated from continental regions bordering the North Sea, including the Netherlands, Germany and Denmark. What is more, these families interbred with the existing population of Britain, but importantly this integration varied from region to region and community to community.

“With 278 ancient genomes from England and hundreds more from Europe, we now gained really fascinating insights into population-scale and individual histories during post-Roman times,” says Joscha Gretzinger, a lead author of the study. “Not only do we now have an idea of the scale of migration, but also how it played out in communities and families.”

Migrants intermixed with the local population

Upon arrival, the migrants intermixed with the local population. In one case, in an Anglo-Saxon cemetery from Buckland near Dover, researchers were able to reconstruct a family tree across at least four generations and identify the point in time when migrants and locals intermarried. This family showed a large degree of interaction between the two gene pools. Overall, the researchers witnessed burials of prominent status across the studied cemeteries of both local and migrant origin.

The interdisciplinary team consisting of more than 70 authors was able to integrate archaeological data with these new genetic results, which revealed that women of immigrant origin were buried with artifacts more often than women of local origin, especially considering items such as brooches and beads. Interestingly, men with weapons were found to have both genetic origins equally often. These differences were locally mediated with prominent burials or wealthy graves seen across the range of origins. For example, a woman buried with a complete cow in Cambridgeshire was genetically mixed, with majority local ancestry.

Duncan Sayer, archaeologist from the University of Central Lancashire and a lead author of the study says, “We see considerable variation in how this migration affected communities. In some places, we see clear signs of active integration between locals and immigrants, as in the case of Buckland near Dover, or Oakington in Cambridgeshire. Yet in other cases, like Apple Down in West Sussex, we see that people with immigrant and local ancestry were buried separately in the cemetery. Perhaps this is evidence of some degree of social separation at this site.”

Impact of this historic migration on present-day English people

With the new data, the team could also consider the impact of this historic migration today. Notably the present-day English derive only 40% of their DNA from these historic continental ancestors, whereas 20 to 40% of their genetic profile likely came from France or Belgium. This genetic component can be seen in the archaeological individuals and in the graves with Frankish objects found in early Medieval graves, particularly in Kent.

“It remains unclear whether this additional ancestry related to Iron Age France is connected to a few punctuated migration events, such as the Norman conquest, or whether it was the result of centuries-long mobility across the English Channel,” says Stephan Schiffels, lead senior author of the study. “Future work, specifically targeting the medieval period and later will reveal the nature of this additional genetic signal.”