The neighbors of the caliph: Archaeologists uncover ancient mosaics on the shore of the Sea of Galilee 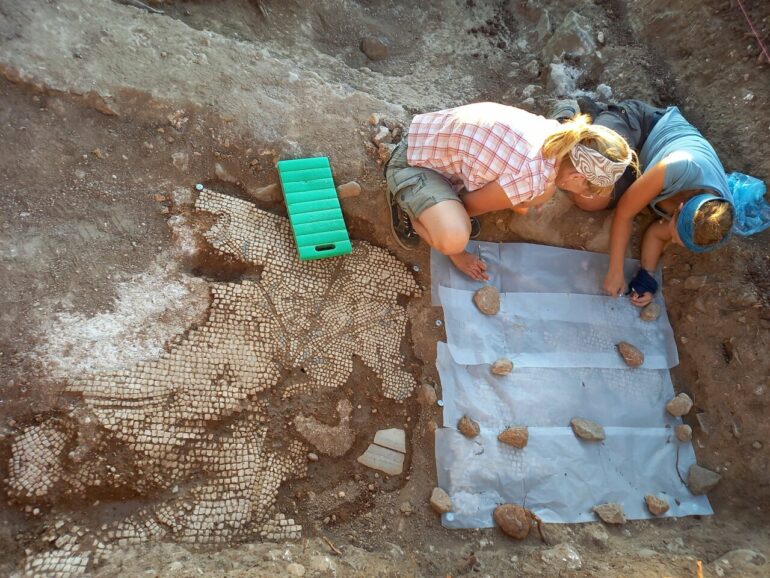 With the help of geomagnetic surface surveys and subsequent hands-on digging, an excavation team from Johannes Gutenberg University Mainz (JGU) has revealed new insights into the area in which the caliph’s palace of Khirbat al-Minya was built on the shores of the Sea of Galilee. According to these findings, there had already been a settlement occupied by Christian or Jewish inhabitants in the immediate vicinity long before the palace was built.

“This time we have really hit the jackpot with our excavations,” said site director and archaeologist Professor Hans-Peter Kuhnen, with regard to the outcome of the most recent undertakings in the area around the early Islamic caliph’s palace Khirbat al-Minya in Israel. The team of archaeologists from Mainz made this major discovery using geomagnetic methods and by digging test pits on the basis of the findings. They discovered that in the early 8th century the caliph had commissioned the building of his palace, with its incorporated mosque and a 15-meter-high gateway tower, not—as hitherto suspected—on greenfield land on the unoccupied shore of the Sea of Galilee, but adjacent to and respectfully co-existing with a prior settlement.

The research project was initially conceived as a means of training students in archeological field work. The team was accommodated in the Tabgha Pilgerhaus guesthouse run by the German Association of the Holy Land (DVHL), which has owned the site of the excavations on the northwest shore of the Sea of Galilee since 1895.

During their dig, the Mainz archaeological team found stone structures made of basalt dating to various periods, with plastered walls, colorful mosaic floors, and a water cistern. The plants portrayed in one of the mosaics are particularly remarkable as they have the long, curved stems typical of those also depicted in so-called Nile-scene mosaics created in the 5th to 6th centuries. The mosaic’s images of the flora and fauna native to the Nile valley symbolized the life-giving power of the mighty river with its annual floods guaranteeing Egypt’s agricultural fertility. That explains why both late-antique churches, such as that in the nearby Church of the Multiplication in Tabgha, and luxurious dwellings in cities of late antiquity were decorated with Nile-scene mosaics.

The recently discovered mosaic, together with related ceramic finds dating to the 5th to 7th centuries, show that the settlement on the shores of the lake was already thriving centuries before the work on the caliph’s palace had commenced. Its original inhabitants were either Christians or Jews, and they were subsequently joined by a small Islamic community for whom the caliph had a side entrance constructed in the early 8th century so that they could access his palace mosque. The unearthed ceramics have revealed that the site remained occupied under the control of the Umayyad and then Abbasid caliphates from the 7th to the 11th century.

New construction projects were initiated in this period, during which parts of the mosaics fell victim to pickaxes wielded by religiously inspired iconoclasts, sections of old walls were demolished, and the stones were transported away for reuse elsewhere. The remains finally became the location of a graveyard in which the dead were buried, in accordance with Muslim custom, lying on their side with their faces directed towards Mecca.

Nearby, the Mainz team also exposed a stone built furnace used to process sugar cane. Although sugar cane represented one of the top agricultural exports of the Holy Land from the period of the early Middle Ages and brought in considerable wealth for the landowners, vast volumes of water were needed to cultivate it while large amounts of wood were required to operate boiling furnaces. The result was extensive soil erosion and an environmental disaster that the area around the lake had not fully recovered from even by the 20th century. The immense scale of sugarcane cultivation in the Middle Ages was demonstrated by both the findings of the excavations at the Caliph’s Palace—those from 1936 to 1939 and those in 2016—and by the 2019 Mainz geomagnetic surveys, which all revealed evidence of dozens of such furnaces in operation between the 12th and 13th-14th centuries.

“Our most recent excavations show that Caliph Walid had his palace built on the shore of the Sea of Galilee in an already carefully structured landscape that had long been inhabited. It was here that considerable money was subsequently made through the cultivation of sugar cane, sadly causing lasting damage to the ecosystem,” said Kuhnen.

“Our research has brought this settlement adjacent to the caliph’s palace to light again, putting it in its rightful context among the history of human settlement of the Holy Land. Over the centuries, it experienced alternating periods of innovation and decline, but there was no real disruption to its existence during its lifetime.”

The Mainz-based team was able to locate this historic hotspot so accurately with its test pits due to the results of geomagnetic surface surveys conducted on-site in a pilot project in 2019. The technology employs magnetic sensors to detect and map tiny variations in the Earth’s magnetic field caused by soil disturbances, for example, those caused by construction work. This allows archaeologists to predict with a fair degree of confidence the course of walls and flooring and to identify the site of hearths and ovens hidden under the soil, without requiring the use of a spade. However, to actually verify whether magnetometry results indeed indicate the presence of something interesting and in order to date the potential structures, archaeologists need to dig targeted test pits—as did the team from JGU’s Department of Ancient Studies at Khirbat al-Minya.

Due to the coronavirus pandemic, Kuhnen and his team had to wait three long years before they were able to get back to the site to see what was waiting for them. However, toiling away under the scorching August sun, they were richly rewarded for their efforts.

“It was our prior geomagnetic scans that provided us with unusually accurate indications of what we were likely to find below the surface. The outcome of our excavations has been exactly what we hoped for. Combining these two methods of investigation requires less exertion, helps preserve the archaeological heritage, and is thus the future of our discipline,” concluded Professor Hans-Peter Kuhnen in the light of the current excavations on the shore of the Sea of Galilee, which will continue next year.


Citation:
The neighbors of the caliph: Archaeologists uncover ancient mosaics on the shore of the Sea of Galilee (2022, September 26)