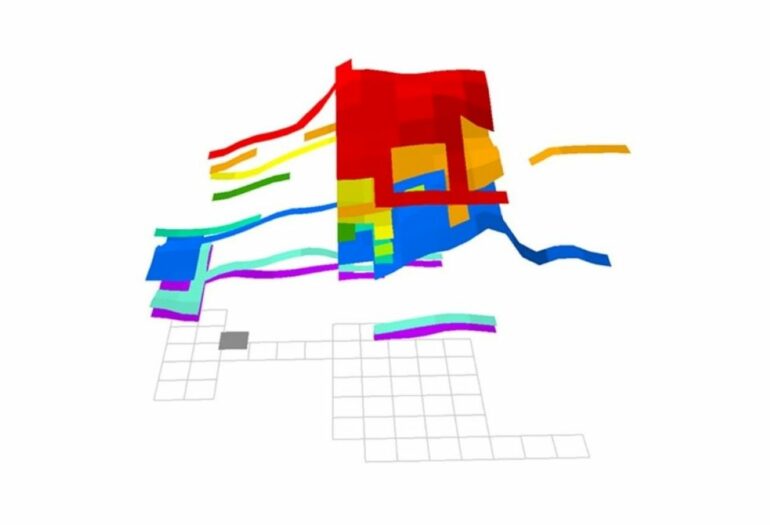 Faced with the constraints created by the pandemic, Julien Riel-Salvatore got creative. Unable to visit the Italian archaeological sites he specializes in, the professor in the University of Montreal’s Anthropology Department set to work studying part of an orphaned collection of artifacts originally assembled by Canadian archaeologist Philip Smith.

Smith was a UdeM professor who excavated Ganj Dareh in Iran between 1965 and 1974. Ganj Dareh, which means “Treasure Valley,” is an important Neolithic archaeological site that has yielded some of the earliest evidence of human sedentism, agricultural development and goat domestication.

Drawing on Smith’s archives, Riel-Salvatore produced three-dimensional digital maps of the sedimentary strata Smith excavated. The 3D mapping, which shows walls of houses, wells, hearths and burial places, is the subject of a recent article in the journal PLOS ONE.

Ganj Dareh is a mound site seven meters high and forty meters in diameter located in Iran’s Kermanshah province. It is believed to have been occupied by humans roughly 10,200 years ago for a period of 300 to 600 years. “It is a short period of time in archaeological terms but it was very rich in technological development,” explained Riel-Salvatore. “Among other things, clay objects, sun-baked bricks and carved stone tools have been found at the site.”

Smith, one of the first archaeologists in UdeM’s Anthropology department, first visited the site in 1965 to begin excavating it. He returned to Ganj Dareh four more times and excavated 20 percent of the site’s five levels.

“After 1974, the digs were suspended, but Smith was able to bring back a good deal of material, including animal and human bones, plant remains, sediment samples and various artifacts,” said Riel-Salvatore.

That material is now conserved at three institutions: the human remains at Simon Fraser University in British Columbia, the animal remains at the Smithsonian Institute in Washington, and an extensive collection containing sedimentary, architectural and charcoal samples, bone, stone and clay tools, and Smith’s excavation notes at UdeM.

Recently, an analysis of collagen samples extracted from some of the animal bones yielded evidence of goat domestication at the site and, by extension, human sedentarization. Dating of the plant remains has revealed evidence of domesticated barley and lentils. “Ganj Dareh has been a focal point for research on prehistory and the transition to agriculture,” said Riel-Salvatore.

Riel-Salvatore and two doctoral students began working on the collection, which had been languishing in the department’s archives, and set about developing a three-dimensional model of a portion of Ganj Dareh’s West Trench, which had been excavated by Smith.

The model is based on a small, 8-square-meter section of the site, about 10 percent of the area explored by Smith. It shows the stratification of the site and makes it possible to study the evolution of human behavior through the sedimentary layers.

“The paper published in PLOS ONE is a first step,” said Riel-Salvatore. “It’s a proof of concept of our approach that will allow us to pursue our research.”

Sanaz Shirvani, a Ph.D. student of Iranian origin, and three master’s students in archaeology are now tackling the entire collection. “Sanaz is one of five recipients of a prestigious fellowship awarded by the Wenner-Gren Foundation for Anthropological Research, which supports students from countries where archaeological training and research remain to be developed,” noted Riel-Salvatore.

And much remains to be done at UdeM’s Anthropocene archaeology lab, which Riel-Salvatore directs: the Ganj Dareh collection contains some 100,000 objects and samples!

His long-term plan is to create a virtual repository comprising 3D models of key “Treasure Valley” artifacts in order to establish a permanent digital archive of all the analog material for the benefit of the international archaeological community.

“Ultimately, our goal is to make a slice of the history of Iran and the history of humanity accessible,” said Riel-Salvatore. “It’s important to make these archives accessible to the scientific community and to the people who live in the region, because they are part of Iranian heritage. So the project’s results will soon be posted on a website and translated into French, English and Farsi, with the support of the University of Montreal’s International Affairs Office.”