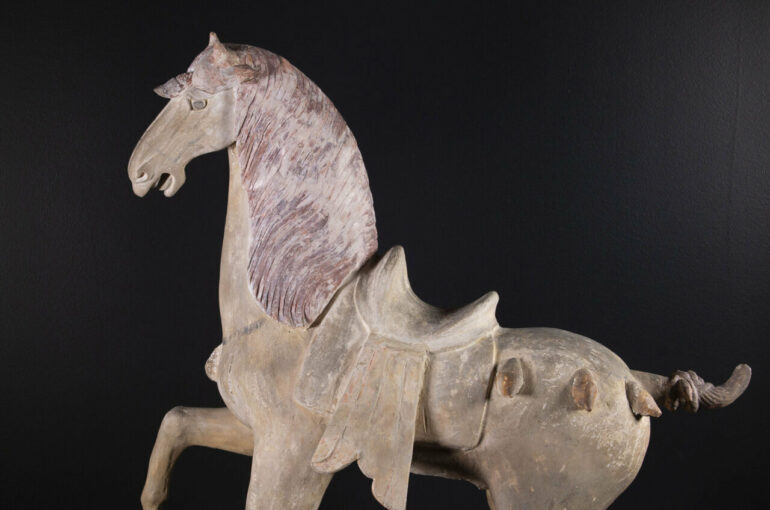 The Cincinnati Art Museum turned to a scientist at the University of Cincinnati for help solving a mystery 1,300 years in the making.

The museum’s Chinese dancing horse sculpture is so realistic that the fiery steed seems ready to gallop off its pedestal. But East Asian art curator Hou-mei Sung questioned the authenticity of a decorative tassel on the terracotta horse’s forehead that resembles the horn of a mythological unicorn.

The museum reached out to UC College of Arts and Sciences assistant professor of chemistry Pietro Strobbia for help to determine if the tassel was original to the work.

“Many museums have a conservator but not necessarily scientific facilities needed to do this kind of examination,” Strobbia said. “The forehead tassel looks original, but the museum asked us to determine what materials it was made from.”

Strobbia and his collaborators wrote about the project for a paper published in the journal Heritage Science.

Sung has seen many examples of ancient sculptures paying tribute to the dancing horses that performed for emperors as far back as 202 B.C. But no others have forehead tassels, she said. Was it perhaps added at some later date?

“I believed it was a mistake. The tassel wasn’t in the right position,” she said. “These pieces are so old. They often go through many repairs.”

Donated to the Cincinnati museum by a collector in 1997, the dancing horse dates back to the Tang dynasty when such sculptures were commissioned for the express purpose of entombing them with royalty upon their deaths, Sung said.

Dancing horses were trained to move in time with a drumbeat. Sung said Emperor Xuanzong from the eighth century loved horses so much that he had a stable of more than 40,000. For one birthday celebration, he invited a troupe of 400 dancing horses to perform the “Song of the Upturned Cup.”

“During the dramatic finale, one horse would bend its knees and clench a cup in its mouth and offer wine to the ruler to wish him longevity,” Sung said. “This became a ritual.”

The museum’s terracotta horse is saddled with a blanket and flowing silken material where stirrups often hang. Ten conical tassels adorn the horse in the same reddish color as its short-cropped tail and long mane.

“The making of the sculpture is beautiful. These horses are renowned,” said Kelly Rectenwald, co-author of the paper and associate objects conservator at the Cincinnati Art Museum.

With a background in archaeology and chemistry, Rectenwald said she understands how the latest science techniques are helping to shed new light on antiquities.

“We don’t have that kind of scientific equipment here, so partnering with UC has been a great resource,” she said.

To answer some of the fundamental questions about the piece, the museum agreed to allow UC’s Strobbia and collaborators such as Claudia Conti at Italy’s Institute of Heritage Science to take 11 tiny samples for analysis.

“We judged the risk was worth the reward to answer the question,” Rectenwald said.

Researchers deployed a battery of molecular, chemical and mineralogical tests of the masterpiece and its features using cutting-edge techniques such as X-ray powder diffraction, ionic chromatography and Raman spectroscopy.

Strobbia has always had an interest in art, surrounded by the work of Raphael, Michelangelo and Bernini in Italy.

“I think I grew up a little spoiled coming from Rome,” he said.

He and his research partners found that, indeed, the sculpture’s forehead tassel was made of plaster, not terra cotta. It was added to the sculpture using animal glue.

The museum decided to remove the tassel in keeping with what they know about the original artworks, Rectenwald said. Beneath the tassel, Rectenwald found a smooth surface with no sign of scoring one might expect to see under sculptural adornments, providing more evidence that the tassel was a subsequent addition.

Researchers also discovered that two other tassels were repaired at different times, suggesting the sculpture was the subject of multiple restoration efforts over its many centuries, Rectenwald said.

“It was restored at least twice in its lifetime,” she said. “Finding anything new about an artwork is really interesting.”

Now Strobbia hopes to expand on his experience with the Cincinnati Art Museum by offering his chemistry expertise to other museums in the Midwest and perhaps UC’s own art collection.

Collaborations between art historians and scientists give an added dimension to the stories behind these precious masterpieces.