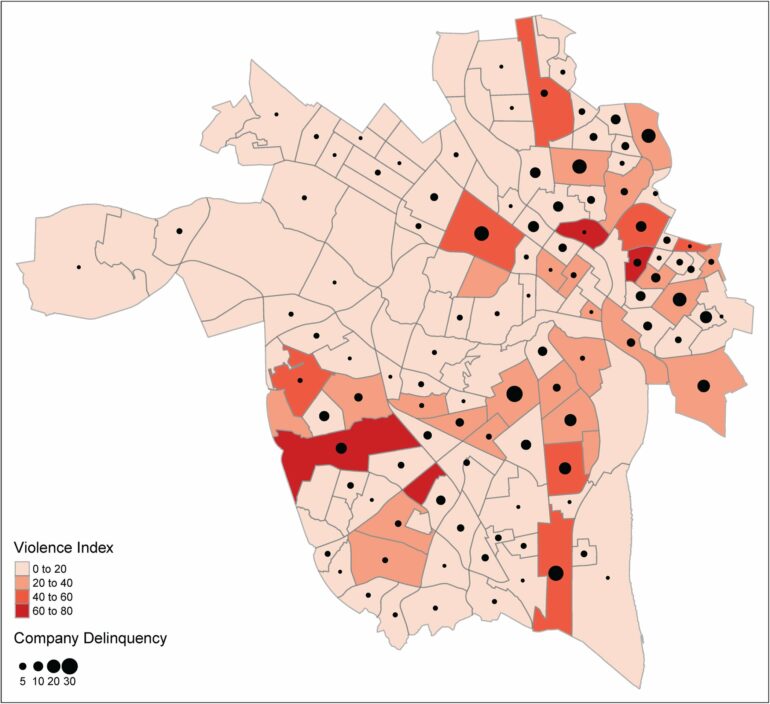 Negligent landlords—those who allow their properties to become dilapidated despite having tenants—are a significant predictor of violence in Richmond neighborhoods, even more than personal property tax delinquency, population density, income levels and other factors, according to a new study by researchers at Virginia Commonwealth University.

“Negligent landlords contribute significantly to violence in Richmond neighborhoods via the environment,” said lead author Samuel West, Ph.D., an alum of the Department of Psychology in the College of Humanities and Sciences and an assistant professor of psychology at Virginia State University. “This impact was above and beyond the impact of those who live in these neighborhoods in terms of the state of their respective properties.”

West and other researchers at VCU collected data on violence events, tax delinquency of company-owned properties (such as rental homes and apartments), tax delinquency of personal properties, population density, race, income, food stamps and alcohol outlets for each of Richmond’s 148 neighborhoods.

Tax delinquency of company-owned properties was the only variable that predicted violence in all but four of Richmond’s 148 neighborhoods.

The researchers replicated the analysis using violence data for a different time period and found the same result.

“The key finding here was that the company delinquency was a stronger or more important correlate of violence than personal delinquency,” said West, who initiated the project while serving as a postdoctoral researcher with the Injury and Violence Prevention Program at VCU Health.

The study, “Comparing Forms of Neighborhood Instability as Predictors of Violence in Richmond, VA,” was published in PLOS One.

The findings are consistent with previous research that suggests “slumlord buyout programs” are tied to reduced violence in cities, West said. For example, a program in Philadelphia purchased neglected properties in the East Liberty neighborhood and provided them to community residents to renovate and rehabilitate. It led to a decline in violence over a sustained period of time, West said.

“Although we acknowledge this would be a massive effort, the data do support the use of such programs to curb violence among other social difficulties,” West said. “I believe that Richmond is a perfect place to attempt a program like this at a larger scale than was done in Philadelphia (i.e., a single neighborhood).”

There are no laws in Virginia protecting tenants from eviction if their landlord loses their rental property to state property auction, West said. In Richmond, along with most medium to large cities, delinquent properties are seized and auctioned off to recoup costs, he said.

“When this happens, the winners of the auction are typically given carte blanche to decide what to do with the tenants as they no longer have a valid contractual agreement,” he said. “This aspect greatly endangers the residential stability of our neighborhoods.”

West was inspired to explore this topic through his observation of dilapidated buildings next to new construction in Richmond.

“Given the preponderance of real estate development and the aggressive housing market in Richmond, it seemed important to better understand how these seemingly inane facets of our society may impact some of our deepest problems,” he said.

The researchers hope their findings will contribute to a growing perspective by scholars that research should break away from the traditional view that members of a community hold the majority of the blame for violence that occurs there.

In Other sciences
on 6 September 20227 min read

“Our work, along with other recent research, emphasizes that we need to be examining and addressing the impacts of forces from outside high-violence communities that carry such major consequences,” West said.

He added, however, that individual autonomy might also be considered a key factor.

“Social psychologists place a major emphasis on autonomy as a psychological need. In the case of a negligent landlord, the tenant(s) may live in a constant state of highly salient violations of their own autonomy which may further undermine attempts to improve the conditions of their own communities,” he said. “As evinced by the East Liberty project from Philadelphia, when this autonomy is restored, it is used in a productive fashion such that it improves the quality of life and safety of all in their communities through restoring their collective efficacy.”