Words on bronze hand may rewrite past of Basque language 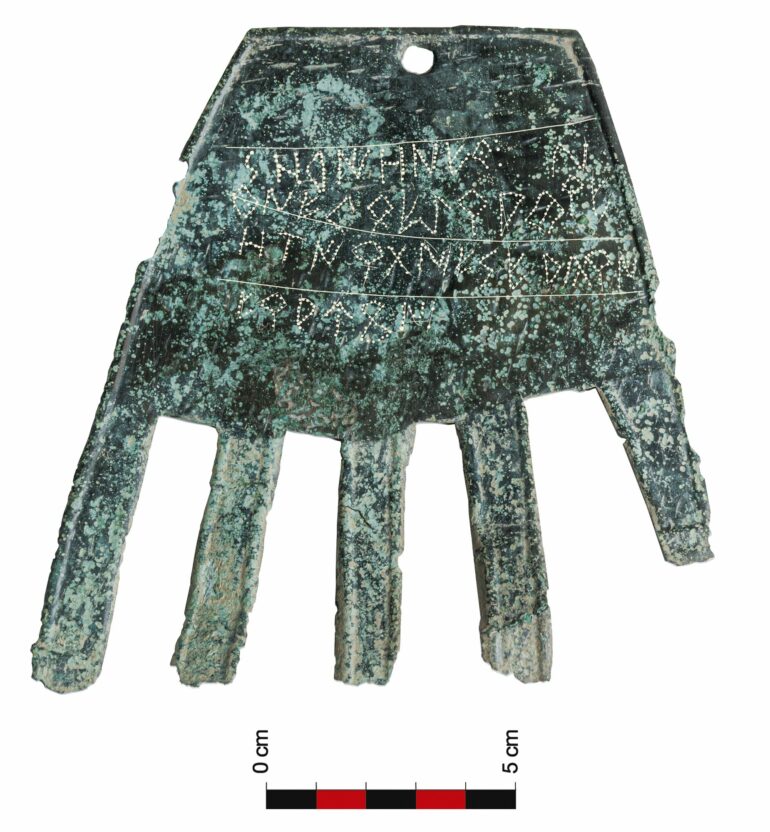 The discovery of five words inscribed on a 2,000-year-old bronze hand may help rewrite the history of the Basque language, one of Europe’s most mysterious tongues.

Investigators in northern Spain said this week they discovered what they believe to be the oldest written record of a precursor to modern Basque, pushing back its earliest evidence to the first century B.C.

The Aranzadi Science Society, a Basque research institute, said the inscription was found on a flat piece of bronze shaped like a human hand that archaeologists unearthed last year. Researchers think it is the earliest known evidence of a written Vasconic language, a precursor to the Basque still spoken in parts of northern Spain and southwest France.

The discovery could challenge linguists’ wide-held belief that the Vascones, an Iron Age tribe centered on territory that makes up Spain’s modern Navarra region, only started writing in their language after the introduction of the Latin script by Roman invaders.

“This piece completely changes what we thought until now about the Vascones and their writing,” said Joaquín Gorrochategui, professor of Indo-European Linguistics at the University of the Basque Country. “We were convinced that the Vascones didn’t know how to read or write in antiquity and only used script for minting coins.”

Archaeologists believe the hand, which they call “the hand of Irulegi” after the site where it was found at the foot of a medieval castle, was designed to hang on a door, likely as a amulet of protection.

So far, linguists have been able to translate only one of the words inscribed on it: “sorioneku,” which corresponds to the Basque word “zorioneku,” or “fortunate.”

Basque has survived for centuries despite ceding ground to Spanish and French. Several hundred thousand people are estimated to speak the language, also known as Euskara, mostly in the Spanish Basque Country and Navarra regions and across the Pyrenees in a small area of France.

It is considered by linguists to be a “language isolate,” meaning it has no known roots in other language groups.

Citation:
Words on bronze hand may rewrite past of Basque language (2022, November 16)