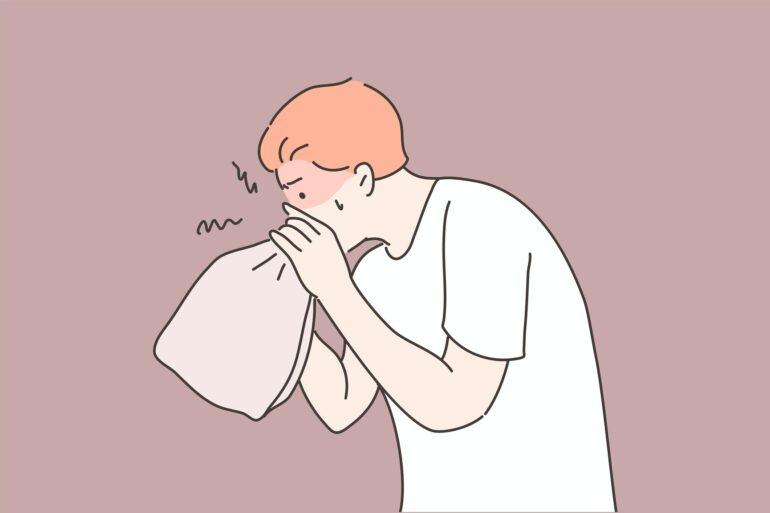 You’re startled by a threatening sound, and your breath quickens. You smash your elbow and pant in pain. Why does your breathing rate increase dramatically when you’re hurting or anxious?

As neurobiologists studying how the brain responds to environmental threats and the neural circuitry of emotion, we were curious about the answer to this question ourselves. In our recently published study, we discovered that one particular circuit of the brain in mice underlies this tight connection between pain, anxiety and breathing. And this discovery may eventually help us develop safer pain killers for humans.

The part of the brain that takes the breath away

One of the most common symptoms of both pain and anxiety disorders is shortness of breath, or hyperventilation. On the other hand, slow, deep breathing can reduce pain and distress. The simplest way to explain this, we reasoned, is the existence of a common pathway in the brain that regulates breathing, pain and anxiety simultaneously.

So we searched for brain regions previously reported to regulate breathing, pain and emotion. A small area in the brainstem called the lateral parabrachial nucleus caught our attention. Not only is it part of the breathing regulation center of the brain, it also mediates pain and negative emotions like fear and anxiety.

Searching through a public database of gene expression patterns, or how genetic material is translated into proteins that let cells function, in the mouse brain, we serendipitously found that one type of opioid receptor called the µ-opioid receptor is highly expressed in parabrachial neurons.

Opioids are chemical compounds that decrease pain and promote positive emotions. But they can also slow breathing rates to dangerously low levels, or stop breathing altogether. This repression of breathing is the main reason opioid overdoses cause death.

Previous studies have shown that the effects opioids have on the body are mainly mediated by µ-opioid receptors. We therefore focused our investigation on how pain and breathing interact with each other in neurons that express these receptors.

We labeled the neurons projecting to the breathing and pain centers with multicolored fluorescent proteins. In doing this, we were able to identify two subsets of neurons that express µ-opioid receptors. These neurons were arranged in a core-shell shape, where one subset of neurons are wrapped around the other subset. The outer shell neurons regulate breathing by sending their axons – the long part of the neuron that transmits electrical signals – to the part of the brainstem that controls breathing. The inner core neurons, on the other hand, mediate pain and anxiety by sending their axons to the brain’s…