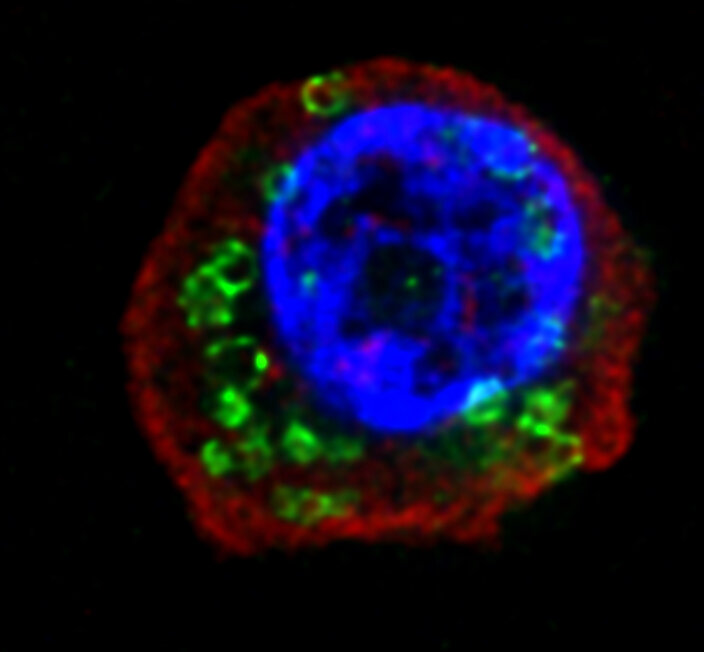 De’Broski Herbert has a philosophy that’s guided his career researching helminths, or parasitic worms, and their interaction with their hosts’ immune systems: “Follow the worm.”

“The mantra of my lab since its inception has been that parasitic worms manipulate their hosts in very interesting ways to maintain their survival,” says Herbert, an associate professor of pathobiology in Penn’s School of Veterinary Medicine. “SARS-CoV-2 doesn’t care about staying in your body very long because it is transmitted so easily. Worms aren’t spread so easily, so they have to figure out how to persist.”

That focus has revealed a key insight about an immune signaling molecule, the cytokine IL-33, that is important not only in parasite infections, but in a range of other health conditions, such as asthma, obesity, and eczema. In a new study published in Science Immunology, Herbert and colleagues made insights that explain how IL-33 can both help defend the body against parasite infection, but also suppress chronic inflammation in diseases where the immune system is activated inappropriately and causes harmful pathology. A key discovery was that the activity of IL-33 depends upon which cell type is releasing it.

“Lots of people have been interested in IL-33 ever since two big genomic association studies implicated it and its receptor in the pathogenesis of asthma,” Herbert says. “Other researchers have looked at it in the context of infections and others in the context of the brain and development. And everyone knew this protein was in the nucleus, but no one understood how it got out of the cell to accomplish all of these things.

“I’m excited for this work because not only do we find this cytokine in a cell type that nobody was expecting, but we also present a mechanism that no one was expecting for how it could come out.”

IL-33 has been of major interest to immunologists focused on what are known as type 2 immune responses, typically associated with parasite infections or asthma and allergies. On the parasite front, researchers knew that IL-33 acted in part to “wake up” the immune system to the presence of a worm infection. In a mouse model, animals lacking IL-33 sustain worm infections much longer than those with IL-33 intact.

To find out whether it mattered which cell type was releasing the IL-33 signaling molecule, Herbert and colleagues used special mouse model in which only myeloid antigen-presenting cells (immune cells), or epithelial cells (those that line mucosal surfaces), failed to release IL-33.

“Sure enough, we found that when animals lacking the myeloid-derived IL-33 experienced a hookworm infection, they eliminated those hookworms quite fast,” Herbert says. Mice lacking IL-33 in the epithelial cells, however, were not able to readily clear the infection. The same results held up in another rodent model, this one of roundworm infection.

Dendritic cells, a type of myeloid antigen-presenting cell, produce IL-33, and further experiments showed that the cytokine produced by these cells supported a specific population of regulatory T cells (Tregs), which are cells “whose whole purpose is to suppress the immune response,” Herbert says.

Perforin-2, as its name suggests, forms a pore that spans the cell membrane, like a tunnel in a hillside, allowing the transport of proteins in and out. The find made complete sense to the researchers, providing an explanation for how dendritic cells could promote the release of IL-33 into the tissues to interact with Tregs. And when Herbert and colleagues experimentally eliminated perforin-2 from dendritic cells, they saw a subsequent lack of Treg growth.

To connect the findings in their animal model and lab dishes to humans, the team utilized patient samples from Penn otolaryngologist Noam Cohen. They found perforin-2 at the plasma membrane of cells from polyps removed from patients with chronic rhinosinusitis, suggesting that the significance of the findings extends to human health.

Yubico security keys are about to become even more secure

The study paves the way for even more translational work in immunology—and worms are to thank. “It’s kind of the missing link,” Herbert says. “It opens up a whole new direction for understanding how this cytokine could be involved in obesty, inflammatory bowel disease, Crohn’s, asthma, and development.”

Helminthic infections may be beneficial against HIV-1