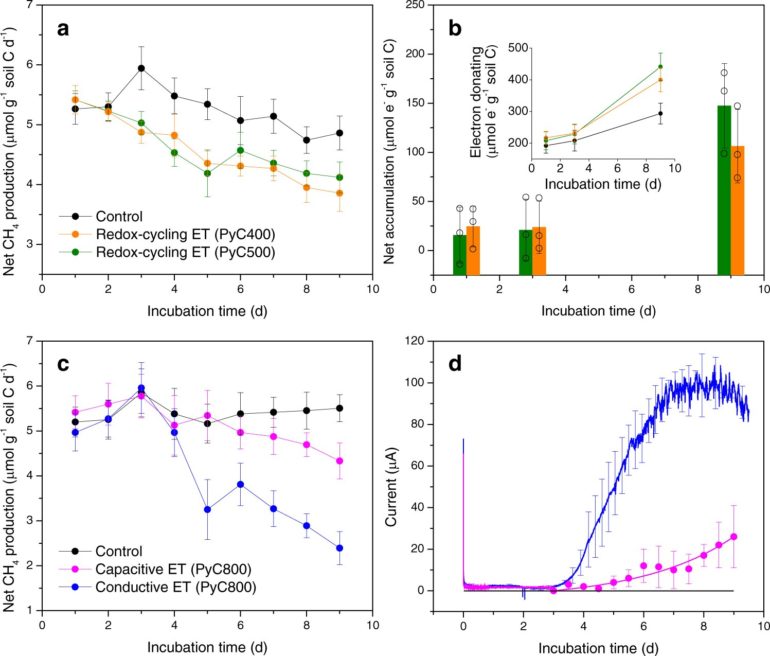 Climatic changes are increasingly giving rise to major fires on peatlands in the northern hemisphere, which release massive quantities of carbon dioxide. However, the biomass of the peatland is not entirely consumed by fire, some turns to charcoal in the absence of air. Now, Dr. Tianran Sun and Professor Lars Angenent from Environmental Biotechnology at the University of Tübingen in cooperation with colleagues at Cornell University in the U.S. have discovered that the carbonized biomass reduces production of the methane gases naturally occurring in the peat soil. They estimate that in the long-term after a fire the presence of carbonized biomass causes peatlands to release 13 to 24 percent less methane than before. Methane is a potent greenhouse gas involved in global warming. The scientists suggest that these new findings should be taken into account when calculating the global carbon exchange and modeling the future climate. Their study has been published in the journal Nature Communications.

Methane production occurs in peatland through the activity of microbes that excrete the gas as a waste product of their metabolism. Despite the methane production, intact peatlands, with a peat layer that grows year after year, binds large quantities of carbon, which are generally seen as valuable carbon storage reservoirs and not as drivers of global warming. “This changes when peatlands catch fire, however,” says environmental chemist Tianran Sun. “The carbon is released as carbon dioxide and passes into the atmosphere. Smoldering fires beneath the surface especially can burn unnoticed for a long time in peatlands and are very difficult to extinguish.”

Nonetheless, Angenent is keen not to be misunderstood: “Our new findings are only a little good news in the midst of a lot of bad news. Peatland fires have devastating effects and release immense quantities of carbon dioxide, that further warms our already too-hot world climate.”

Therefore, if the reduced methane production found after peatland fires is incorporated into models of the future climate, it will not drastically change the general results. But, it is important to account for all effects, even the positive ones.