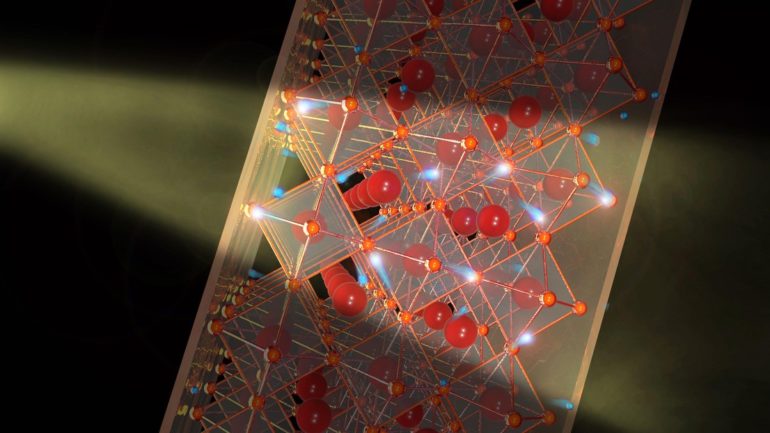 Perovskites are hybrid compounds that can be made from metal halides and organic constituents. Their attractive structural and electronic properties have placed them at the forefront of materials’ research, with enormous potential for transforming a wide range of applications, including in solar cells, LED lights, lasers, and photodetectors.

Metal-halide perovskites in particular show great potential as light harvesters for thin-film photovoltaics. One of the leading candidates among metal halide perovskites is formamidinium lead triiodide (FAPbI3), which has emerged as the most promising semiconductor for highly efficient and stable perovskite solar cells. Consequently, scientists have been trying to maximize its performance and stability.

Now, a team of scientists led by Professor Michael Grätzel at EPFL’s School of Basic Sciences have employed a new chemical trick that greatly amplifies the performance of FAPbI3. Using this approach results in solar cell devices with power-conversion efficiency up to 25.6%, operational stability of at least 450 hours, and intense electroluminescence, with external quantum efficiency (the amount of light that the cell can produce when passing an electric current) exceeding 10%. The work is published in Nature.

The scientists accomplished the feat with an “anion engineering concept” that augments the crystallinity of the FAPbI3 films and eliminates defects. By introducing the pseudo-halide anion formate (HCOO−) to the mix, they were able to suppress structural defects that usually present at grain boundaries and at the surface of perovskite films.

The authors write: “Our findings provide a direct route to eliminate the most abundant and deleterious lattice defects present in metal halide perovskites, providing a facile access to solution-processable films with improved optoelectronic performance.”

In CompaniesSmartphones
on 26 June 20216 min read