PET and CT scans provide keen views of lungs with active TB, and are better assessment tools than sputum tests 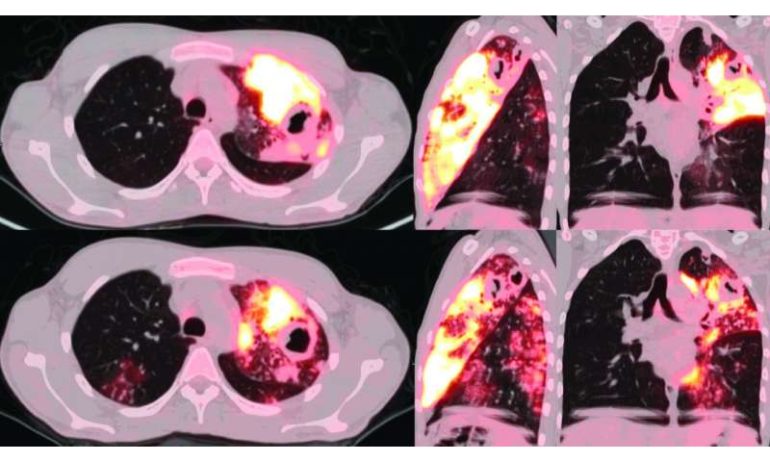 In clinical trials, a time-honored but old-school way to determine if TB is being knocked out by antibiotics involves having study participants cough up phlegm for a sputum culture, a test that can gauge whether the bacteria are succumbing to—or resisting—treatment.

Sputum cultures are widely used to determine the amount of active bacteria among trial participants. They are also collected routinely in clinic and hospital diagnoses of TB. Phlegm, or sputum, is the thick, viscous substance secreted by mucous membranes in the respiratory tract.

But scientists are challenging the use of sputum cultures in clinical trials of TB drugs because emerging evidence suggests the cumbersome sputum test is less reliable than state-of-the-art imaging technology—a real-time view of the infection under the pressure of potent medications. Although no one is questioning the value of sputum tests in the routine diagnosis of TB, scientists now say the phlegm cultures may be inadequate as a testing method in TB drug trials.

Indeed, in an international study that explored how well drug therapy was annihilating active tuberculosis, imaging tools provided the best method of assessing the effectiveness of powerful antibiotics as the drugs attacked active tuberculosis in participants’ lungs. The research ran for 14 days involving tests of individual drugs and combination-drug therapy.

“Monitoring bacterial counts in the sputum of individuals with tuberculosis during two weeks of drug treatment is a key part of developing new TB drugs. However, such studies do not always correlate with the clinical response seen during a full six-month drug regimen,” wrote Dr. Yingda L. Xie, lead author of a report published in Science Translational Medicine. “The rate of change in sputum bacterial load over time provides an informative, but imperfect, estimate of drug activity.

She and an international group of collaborators hailed from major academic centers throughout the United States and TB research institutes in South Africa. Xie studies TB in the division of infectious diseases at Rutgers New Jersey Medical School. Although the study involved only 160 patients, its aim was to provide answers that will help overcome an obstacle that has dogged TB drug research for years—finding more precise ways to measure drug effectiveness in clinical trials.

As shocking as it may seem, the core antibiotics in the TB treatment regimen range between 54 and 75 years old, having been discovered between 1946 and 1967 and remaining in use as key therapeutics to this day. Although other antibiotics, such as bedaquiline, delamanid and pretomanid have emerged in recent years as important medications aimed at multi-drug resistant TB, the new study makes a strong case for what’s hoped will be two important advances in the not-too-distant future: Better methods of testing research participants in drug studies and acknowledging the urgent need to develop new drugs to treat TB. Patients with active tuberculosis are in desperate need of additional medications that can effectively address the disease, public health experts at the World Health Organization say.

Findings by Xie and her colleagues suggest common imaging techniques, such as PET and CT scans, provide a keener and more accurate assessment of the bactericidal—killing activity—of antibiotics. These forms of imaging were superior to so-called enumeration, which essentially involves evaluating from the sputum culture how much of the bacteria declined or didn’t decline after drug therapy. “The PET/CT findings correlated better with the clinical response to TB drugs than did bacterial counts in sputum,” according to Xie.

Discovering ways to better conduct tuberculosis drug studies, and thus ultimately improve treatment, moves doctors and patients one step closer to the larger goal of ending the global scourge altogether. Eliminating TB is a major objective of WHO, which calls its tuberculosis eradication program, End TB. The disease is a worldwide threat with more than 9 million new infections annually. Although overshadowed by the COVID-10 pandemic since the winter of 2020, tuberculosis has been a formidable cause of global death for centuries. An estimated 1.4 million people died of TB in 2019, the most recent year for complete WHO statistics.

In the research conducted by Xie and her team, meanwhile, all patients in the study underwent 2-deoxy-2-fluoro-d-glucose positron emission tomography (PET) and computerized tomography (CT), receiving the scans at the beginning and end of the 14-day drug treatment protocol. An analysis of patients’ radiological data allowed the team to compare single drug doses and combination therapy involving multiple types of lung lesions.

Drugs administered in the research included old pharmaceutical standbys, such as isoniazid, which was approved in the by the U.S. Food and Drug Administration in 1952. Rifampicin, another older medication, was approved in Italy in the mid-1960s and in the United States in 1971. Study participants additionally were administered newer medications, such as moxifloxacin and pyrazinamide. Some drugs were prescribed individually, others in combination. Moxifloxacin is a fluoroquinolone that has become an important medication aimed at the treatment of a wide range of infections, including TB.

“Rifampicin and rifampicin-containing drug combinations were most effective in reducing both lung lesion volume measured by CT imaging and lesion-associated inflammation measured by PET imaging,” Xie wrote. “Moxifloxacin was not superior to rifampicin in any measure by PET/CT imaging [which is] consistent with its performance in recent phase 3 clinical trials. PET/CT imaging revealed synergy between isoniazid and pyrazinamide and demonstrated that the activity of pyrazinamide was limited to lung lesions.”

Tuberculosis has persisted as a global pandemic throughout the cavalcade of recorded human history. Descriptions of what clearly can be interpreted to be tuberculosis are documented in the Old Testament in both Deuteronomy and Leviticus. More obvious evidence of TB as a plague among humankind occurred many millennia before the Old Testament. Egyptian mummies’ bones, in some instances, bear the telltale signs of metastatic TB.

Tuberculosis is an airbone bacterial infection caused by the bacillus Mycobacterium tuberculosis. Infection can occur by inhaling contaminated droplets dispersed into the environment through coughing and sneezing by someone with active TB. The most common form is pulmonary TB which affects the lungs. In some instances the infection can infiltrate the lymphatic system as well as the joints and bones.

Antibiotic could be repurposed and added to tuberculosis treatment arsenal