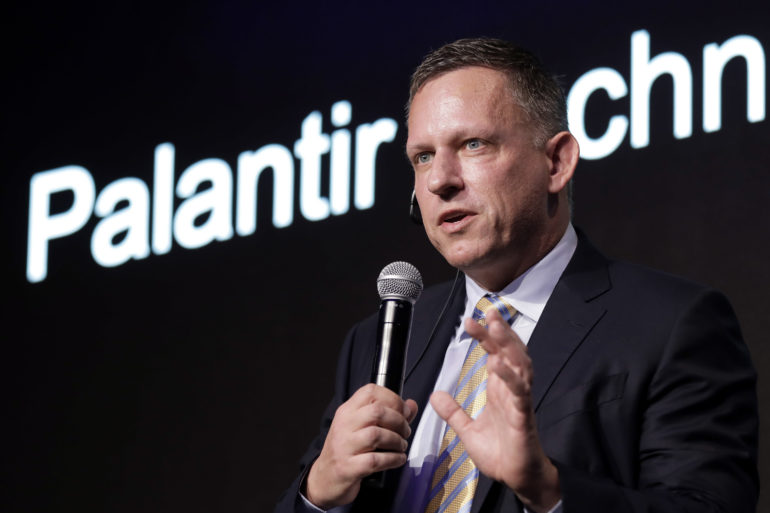 Palantir, the data analytics software company co-founded by Peter Thiel, one of President Donald Trump’s former top allies in Silicon Valley, just wrapped up its best two days since going public in September, even as Trump’s prospects for a second term dimmed.

Thiel, the company’s chairman, saw the value of his stake, owned through various entities, jump by over $700 million over the last two days of trading. In Trump’s 2016 campaign, Thiel was a major supporter and adviser, but the venture capitalist did not back the president’s reelection effort. As of Friday, Trump trailed Democrat Joe Biden, who was just 17 electoral votes short of the 270 needed to win and was making significant progress in key states.

Because of Thiel’s ties to Trump and Palantir’s large government contracts, some investors may have viewed the the company as better off under Trump than a Democratic administration. However, Mark Cash, an equity analyst at Morningstar, said investors are getting more comfortable with the company’s story and aren’t worried about any disruption based on a change in the White House.

Cash didn’t have a good explanation for the stock’s dramatic move up, but said that he’s optimistic about the company’s upcoming third-quarter earnings report scheduled for next week.

“The administration doesn’t matter to their valuation or their market opportunity,” said Cash, who has a $13 price target on the stock. “They’ve been through both sides, Democrat and Republican. They’re not new to this, just newly public.”

Just before Palantir’s market debut, the Defense Department said it awarded the company a $91.2 million contract to provide research and development to the Army Research Laboratory over the next two years. Palantir has been growing by continuing to get big government deals while also building up its roster of private sector clients.

Cash said the company has a “nice pipeline of contracts,” including business with customers using its data tools for Covid 19 response, whether in public health or to route medical supplies.

He also said that Palantir could be in position to win business even in an administration that’s pulling back on defense spending, because the company has been moving deeper into software and away from consulting, making its products more efficient.

“If a deflationary spending environment for defense happens, it can be to their benefit,” Cash said. “Agencies probably can’t take on these expensive multi-year consulting efforts but instead would look to use off-the-shelf solutions that are already made.”

WATCH: Palantir’s potential customer base is a fundamental issue