A ‘beyond-quantum’ equivalence principle for superposition and entanglement 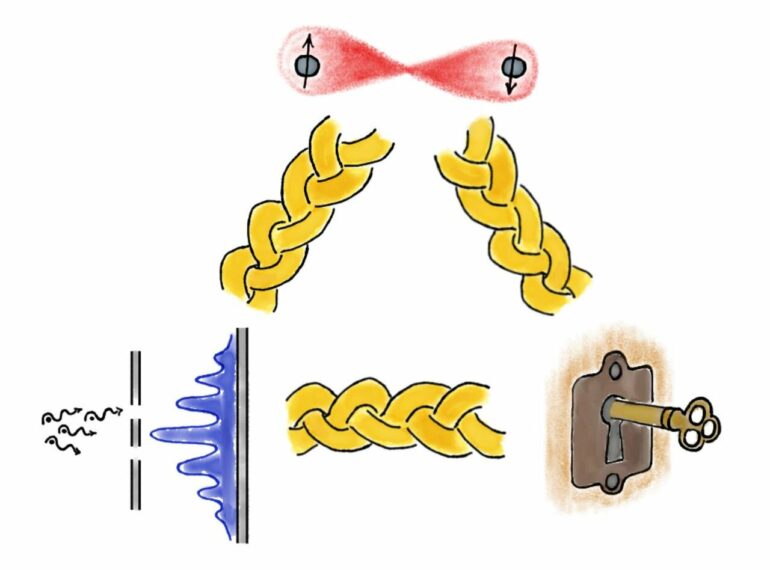 The physics of the microrealm involves two famous and bizarre concepts: The first is that prior to observation, it is impossible to know with certainty the outcome of a measurement on a particle; rather the particle exists in a “superposition” encompassing multiple mutually exclusive states. So a particle can be in two or more places at the same time, and you can only calculate the probability of finding it in a certain location when you look. The second involves “entanglement,” the spooky link that can unite two objects, no matter how far they are separated. Both superposition and entanglement are described mathematically by quantum theory. But many physicists believe that the ultimate theory of reality may lie beyond quantum theory. Now, a team of physicists and mathematicians has discovered a new connection between these two weird properties that does not assume that quantum theory is correct. Their study appears in Physical Review Letters.

“We were really excited to find this new connection that goes beyond quantum theory because the connection will be valid even for more exotic theories that are yet to be discovered,” says Ludovico Lami, a member of the physics think-tank, the Foundational Questions Institute, FQXi, and a physicist at the University of Ulm, in Germany. “This is also important because it is independent of the mathematical formalism of quantum theory and uses only notions with an immediate operational interpretation,” he adds. Lami co-authored the study with Guillaume Aubrun of Claude Bernard University Lyon 1, in France, Carlos Palazuelos, of the Complutense University of Madrid, in Spain, and Martin Plávala, of Siegen University, in Germany.

While quantum theory has proven to be supremely successful since its development a century ago, physicists have struggled to unify it with gravity to create one overarching “theory of everything.” This suggests that quantum theory may not be the final word on describing reality, inspiring physicists to hunt for a more fundamental framework. But any such ultimate theory must still incorporate superposition, entanglement, and the probabilistic nature of reality, since these features have been confirmed time and again in lab tests. The interpretation of these experiments does not depend on quantum theory being correct, notes Lami.

There are practical implications too. Quantum entanglement plays a key role in the design of quantum computers–machines that could outperform standard computers at certain tasks–and in quantum cryptographic protocols, which are already in use and exploit quantum rules to provide ultra-secure communication across channels that, in theory, are immune to hacking. But if quantum theory eventually needs to be replaced by another, more fundamental theory in the future, will we discover that these rules were not really valid or these cryptographic protocols are not secure as promised?

The problem is that to find out you need to analyze superposition and entanglement in terms of some general–and as yet unknown–theory, without using the mathematics of quantum theory. How can you do that? Lami and his colleagues solved this puzzle by studying “general probabilistic theories,” rather than quantum theory. The research was supported in part through a grant that Lami and others received from the Foundational Questions Institute, FQXi, to study the hallmarks and limitations of intelligence in generalized probabilistic theories, allowing them to examine how information is processed in abstract classical, quantum, and “beyond quantum” systems. “This FQXi grant gave me the chance to think about some universal features of information processing in theories beyond quantum mechanics, mathematically modeled by general probabilistic theories, more closely,” says Lami. “And the cryptographic primitive example that we study, secret key distribution, is one of the simplest tasks where this formalism can be applied.”

In the new paper, published in Physical Review Letters, the team has shown that two physical theories exhibit entanglement when combined, if and only if they both exhibit local superpositions. This means that entanglement and superposition are equivalent in any physical theory, not just in quantum theory. They also calculated that in systems where this equivalence holds–whether quantum or beyond-quantum–the laws of the theory can be exploited for ultra-secure encryption. In particular, the team showed that a certain popular quantum cryptographic protocol, known as “BB84,” will always work–even if one day it is found that quantum theory is not fully correct, and needs to be replaced with a more fundamental theory.

“It is somehow reassuring to know that cryptography is really a feature of all non-classical theories, and not just a quantum oddity, since many of us believe that the ultimate theory of nature will likely be non-classical,” says Lami. “Even if one day we found quantum theory to be incorrect we will still know that secret key distribution can in principle work.”

Citation:
A ‘beyond-quantum’ equivalence principle for superposition and entanglement (2022, May 2)