A fresh look at metals reveals a ‘strange’ similarity 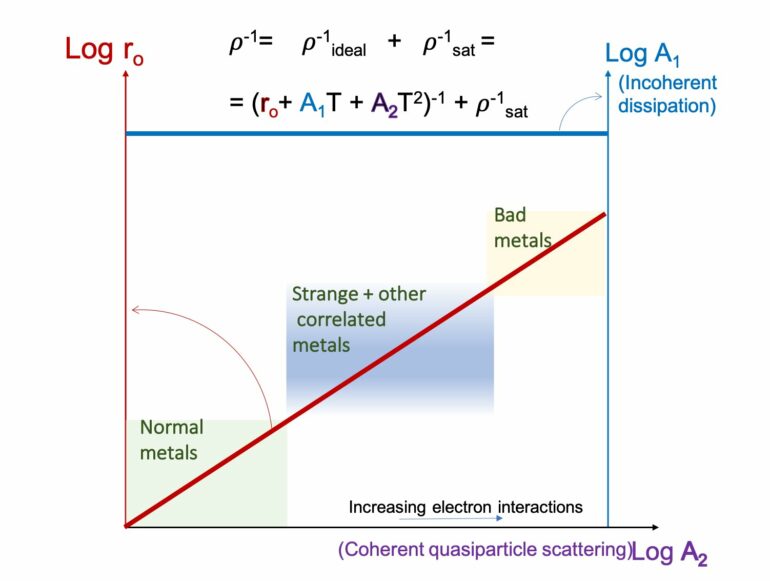 Our theoretical understanding of the way in which metals conduct electricity is incomplete. The current taxonomy appears to be too blurry and contains too many exceptions to be convincing. This is the conclusion that materials scientists from the University of Groningen reached after thoroughly examining the recent literature on metals. They analyzed more than 30 metals and show that a simple formula can provide a classification of metals in a more systematic manner. Their analysis was published in Physical Review B on 29 August.

Metals conduct electricity, but not all in the same way. Scientists differentiate several classes of metals with names such as “correlated,” “normal,” “strange,” or ‘”ad.” Metals in these classes differ, for instance, in the way that their resistivity responds to increasing temperatures. “We were interested in metals that could change from conductor to insulator and vice versa,” explains Beatriz Noheda, Professor of Functional Nanomaterials at the University of Groningen. She is the scientific director at the CogniGron research center, which develops materials-centered systems paradigms for cognitive computing. “For this purpose, we would like to make materials that can be not just insulators or conductors, but that can also change between those states.”

When studying the literature on metal resistivity, she and her colleagues found that the demarcation between different classes of metals was not clear-cut. “So, we decided to have a look at a large sample of metals.” Qikai Guo—former postdoctoral researcher in Noheda’s team and now at the School of Microelectronics of Shandong University, China—and their colleagues from the University of Zaragoza (Spain) and CNRS (France) used the change in resistivity at increasing temperatures as a tool to compare more than 30 metals, partly based on literature data and partly based on their own measurements.

“The theory states that the resistivity response is dictated by the scattering of electrons and that there are different scattering mechanisms at different temperatures,” explains Noheda. For example, at very low temperatures, a quadratic increase is found, said to be the result of electron-electron scattering. Yet, some materials (“strange” metals) show a strict linear behavior that is not yet understood. Electron-phonon scattering was thought to take place at higher temperatures and this results in a linear increase. However, scattering cannot increase indefinitely, which means that saturation should occur at a certain temperature. “Yet, some metals show no saturation within the measurable temperature range and these were referred to as ‘bad’ metals,” says Noheda.

When analyzing the responses of the different types of metals to increasing temperatures, Noheda and her colleagues ran into something unexpected: “We could fit all the data sets with the same type of formula.” This turned out to be a Taylor expansion, in which the resistivity r is described as r = r0 + A1T + A2T2 + A3T3…, in which T is the temperature, while r0 and the various A values are different constants. “We found that using just a linear and a quadratic term is enough to produce a very good fit for all the metals,” explains Noheda.

In the paper, it is shown that the behavior in different types of metals is determined by the relative importance of A1 and A2 and by the magnitude of r0. Noheda says, “Our formula is a purely mathematical description, without any physics assumptions, and depends on just two parameters.” This means that the linear and quadratic regimes do not describe different mechanisms, such as electron-phonon and electron-electron scattering, they just represent the linear (through incoherent dissipation, where the phase of the electron wave is changed by the scattering) and non-linear coherent (where the phase is unchanged) contributions to the scattering.

In this way, one formula can describe the resistivity for all metals—be they normal, correlated, bad, strange, or otherwise. The advantage is that all metals can now be classified in a simple manner that is more transparent for non-experts. But this description also brings another reward: It shows that the linear dissipation term at low temperatures (called Planckian dissipation) shows up in all metals. This universality is something that others had already hinted at, but this formula shows clearly that this is, indeed, the case.

Noheda and her colleagues are no metal specialists. “We came from outside the field, which meant that we had a fresh look at the data. What went wrong, in our opinion, is that people looked for meaning and linked mechanisms to the linear and quadratic terms. Perhaps, some of the conclusions extracted in this manner need to be revised. It is well-known that the theory in this field is incomplete.” Noheda and her colleagues hope that theoretical physicists will now find a way to re-interpret some of the previous results thanks to the formula that they found. “But in the meantime, our purely phenomenological description does allow us to compare metals from different classes.”

a year physicists asked, ‘What lies beyond the Standard Model?’

Provided by
University of Groningen