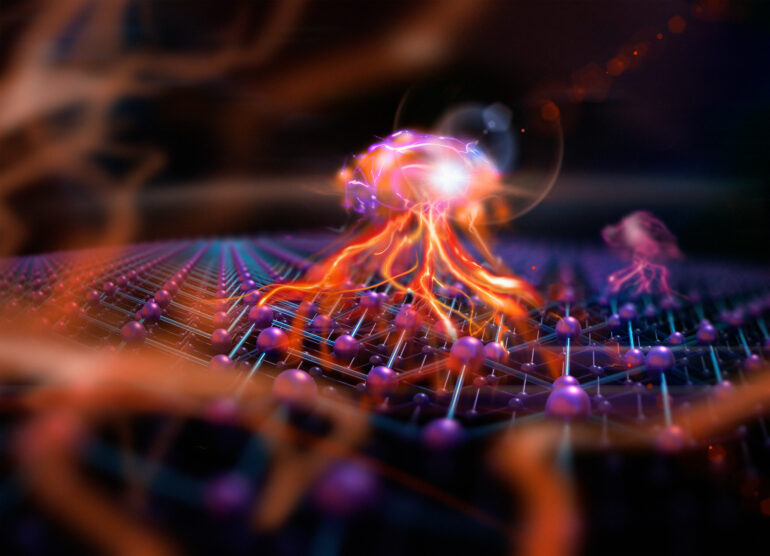 Physicists have created a new ultra-thin, two-layer material with quantum properties that normally require rare earth compounds. This material, which is relatively easy to make and does not contain rare earth metals, could provide a new platform for quantum computing and advance research into unconventional superconductivity and quantum criticality.

The researchers showed that by starting from seemingly common materials, a radically new quantum state of matter can appear. The discovery emerged from their efforts to create a quantum spin liquid which they could use to investigate emergent quantum phenomena such as gauge theory. This involves fabricating a single layer of atomically thin tantalum disulphide, but the process also creates islands that consist of two layers.

When the team examined these islands, they found that interactions between the two layers induced a phenomenon known as the Kondo effect, leading to a macroscopically entangled state of matter producing a heavy-fermion system.

The Kondo effect is an interaction between magnetic impurities and electrons that causes a material’s electrical resistance to change with temperature. This results in the electrons behaving as though they have more mass, leading these compounds to be called heavy fermion materials. This phenomenon is a hallmark of materials containing rare earth elements.

Heavy fermion materials are important in several domains of cutting-edge physics, including research into quantum materials. “Studying complex quantum materials is hindered by the properties of naturally occurring compounds. Our goal is to produce artificial designer materials that can be readily tuned and controlled externally to expand the range of exotic phenomena that can be realized in the lab,” says Professor Peter Liljeroth.

For example, heavy fermion materials could act as topological superconductors, which could be useful for building qubits that are more robust to noise and perturbation from the environment, reducing error rates in quantum computers. “Creating this in real life would benefit enormously from having a heavy fermion material system that can be readily incorporated into electrical devices and tuned externally,” explains Viliam Vaňo, a doctoral student in Liljeroth’s group and the paper’s lead author.

Although both layers in the new material are tantalum sulfide, there are subtle but important differences in their properties. One layer behaves like a metal, conducting electrons, while the other layer has a structural change that causes electrons to be localized into a regular lattice. The combination of the two results in the appearance of heavy fermion physics, which neither layer exhibits alone.

This new heavy fermion material also offers a powerful tool for probing quantum criticality. “The material can reach a quantum-critical point when it begins to move from one collective quantum state to another, for example, from a regular magnet towards an entangled heavy fermion material,” explains Professor Jose Lado. “Between these states, the entire system is critical, reacting strongly to the slightest change, and providing an ideal platform to engineer even more exotic quantum matter.”

“In the future, we will explore how the system reacts to the rotation of each sheet relative to the other and try to modify the coupling between the layers to tune the material towards quantum critical behavior,” says Liljeroth.