An enhanced cooling method for the quantum world 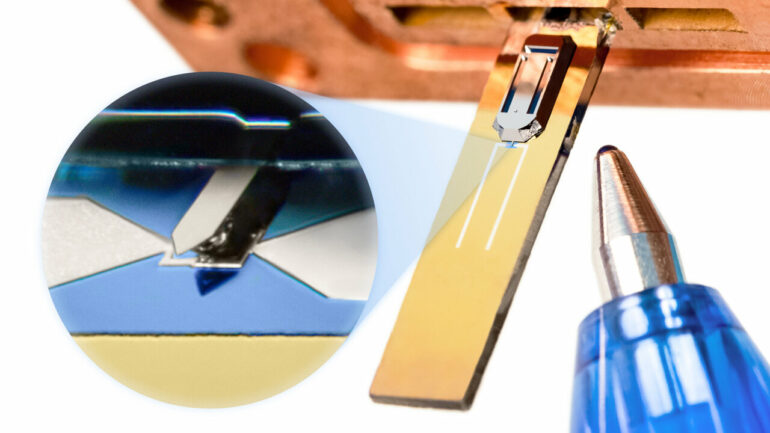 The quantum nature of objects visible to the naked eye is currently a much-discussed research question. A team led by Innsbruck physicist Gerhard Kirchmair has now demonstrated a new method in the laboratory that could make the quantum properties of macroscopic objects more accessible than before. With the method, the researchers were able to increase the efficiency of an established cooling method by an order of a magnitude.

With optomechanical experiments, scientists are trying to explore the limits of the quantum world and to create a foundation for the development of highly sensitive quantum sensors. In these experiments, objects visible to the naked eye are coupled to superconducting circuits via electromagnetic fields. To get functioning superconductors, such experiments take place in cryostats at a temperature of about 100 millikelvin. But this is still far from sufficient to really dive into the quantum world.

In order to observe quantum effects on macroscopic objects, they must be cooled to nearly absolute zero using sophisticated cooling methods. Physicists led by Gerhard Kirchmair from the Department of Experimental Physics at the University of Innsbruck and the Institute of Quantum Optics and Quantum Information (IQOQI) have now demonstrated a nonlinear cooling mechanism with which even massive objects can be cooled well.

In the experiment, the Innsbruck researchers couple the mechanical object—in their case a vibrating beam—to the superconducting circuit via a magnetic field. To do this, they attached a magnet to the beam, which is about 100 micrometers long. When the magnet moves, it changes the magnetic flux through the circuit, the heart of which is a so-called SQUID, a superconducting quantum interference device. Its resonant frequency changes depending on the magnetic flux, which is measured using microwave signals. In this way, the micromechanical oscillator can be cooled to near the quantum mechanical ground state.

David Zöpfl from Gerhard Kirchmair’s team says, “The change in the resonant frequency of the SQUID circuit as a function of microwave power is not linear. As a consequence, we can cool the massive object by an order of magnitude more for the same power.”

The findings are published in the journal Physical Review Letters.

This new, simple method is particularly interesting for cooling more massive mechanical objects. Zöpfl and Kirchmair are confident that this could be the foundation for the search of quantum properties in larger macroscopic objects.

Citation:
An enhanced cooling method for the quantum world (2023, January 18)