An optical chip improved by light 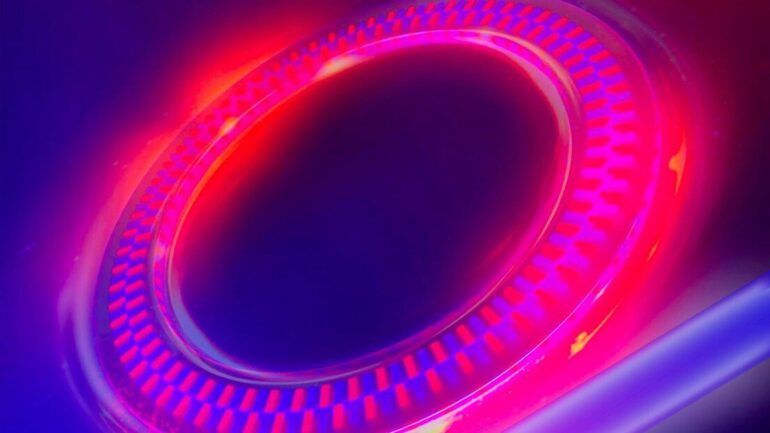 Technology is increasingly moving towards miniaturization and energy efficiency. This also applies to electronic chips. Light, and optics more broadly, are functional in making compact and portable chips. Researchers from the Photonic Systems Laboratory, headed by Professor Camille Brès, have successfully applied a novel principle for introducing second-order optical nonlinearity into silicon nitride chips. A first reported in the journal Nature Photonics.

“When using a green laser pointer for example, the laser itself is not green because these are particularly difficult to manufacture. So we change the frequency of an existing laser. It emits at a frequency which is half that of green, then we double it by using nonlinearity in a crystal which gives us green. Our study consists of integrating this functionality but on chips that can be manufactured with standard techniques developed for electronics (CMOS). Thanks to this, we will be able to efficiently generate different colors of light on a chip,” explains Camille Brès. The demonstrated approach had never been implemented before. Current photonic chips compatible with CMOS processes use standard photonic materials, such as silicon, which do not possess second-order nonlinearity and therefore are not inherently capable of transforming light in this way. “This turns out to be a barrier to the advancement of technology,” adds the professor.

Scientists in the School of Engineering have developed a technique to induce nonlinearity, which is to use to convert light where it is not normally possible to do so. In addition, to make this conversion effective, they used a resonator—a ring-shaped structure that magnifies the nonlinear processes experienced by light. Silicon nitride resonators, the technology of which was established at EPFL and which is now commercialized by Ligentec SA, exhibit very low losses so that light circulates in resonators for a very long time. “Non-linearity comes from the interaction between light and matter. This exchange must be long if the process is to be functional and efficient. However, the chip is a small object on which we do not benefit from long distances” explains Edgars Nitiss, Ph.D. and co-first author. The light introduced into the resonator is captured and travels the time necessary for the nonlinear interaction to be increased.

Two cars on the highway

Thanks to this technique, the efficiency of the chip is significantly improved. But a new constraint is imposed. When using a resonator, we are limited in terms of the colors available,” says Camille Brès. Indeed, the effectiveness of a nonlinear effect also depends on the phase agreement between the different interacting colors, whereas they inevitably have different propagation speeds. Just like two cars on the highway. We want the one in the fast lane to slow down while the other accelerates so that they can roll next to each other and thus interact,” illustrates Jianqi Hu, Ph.D. and co-first author. This is usually achieved only in very constrained cases in a resonator. The researchers found a solution to avoid this constraint and to offer access to a range of several colors despite the use of the resonator. In the resonator, light waves propagate, producing a coherent interaction that changes the properties of the material. A self-organization of the structure is achieved in a completely all-optical manner, which automatically compensates for the phase mismatch regardless of the input color. As such we circumvent a critical limitations of resonators while still benefiting from their strong efficiency enhancement,” concludes the researcher.