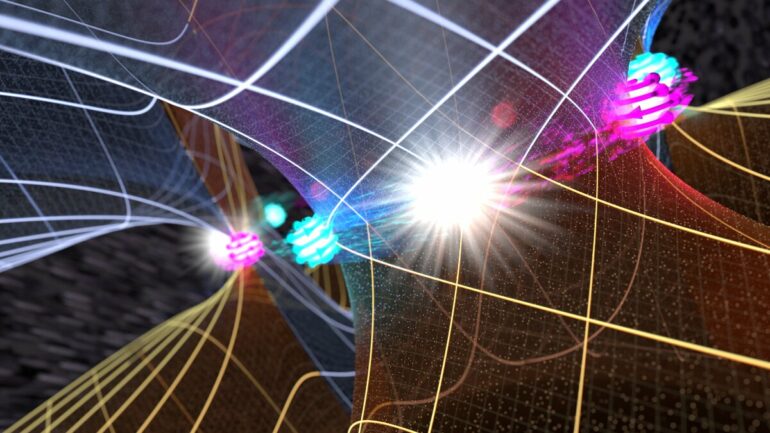 A team of researchers from the University of Warsaw in Poland, the Institute Pascal CNRS in France, the Military University of Technology in Poland and the British University of Southampton has shown that it is possible to control the so-called exceptional points. For the first time, physicists also observed the annihilation of exceptional points from different degeneracy points. You can read about the discovery that may contribute to the creation of modern optical devices in the latest Nature Communications.

The universe around us is made of elementary particles, most of which have their antiparticles. When a particle and an antiparticle, that is, matter and antimatter, meet each other, annihilation occurs. Physicists have long been able to produce quasiparticles and quasiantiparticles—elementary excitations: charge, vibration, energy—trapped in matter, most often in crystals or liquids.

“The world of quasiparticles can be very complicated, although paradoxically, the quasiparticles themselves help simplify the description of quantum phenomena,” explains Jacek Szczytko from the Faculty of Physics at the University of Warsaw.

“Without quasiparticles it would be difficult to understand the operation of transistors, light-emitting diodes, superconductors and some quantum computers. Even abstract mathematical concepts can become quasiparticles, as long as they can be implemented in physical systems. One of such abstract concepts are exceptional points.”

“The so-called ‘exceptional points’ are specific system parameters leading to the commonality of two different solutions that can only exist in systems with losses, i.e. those in which the oscillations slowly fade over time,” says Malpuech.

“They allow the creation of efficient sensors, single-mode lasers, or unidirectional transport. What is important, each exceptional point has a non-zero topological charge—a certain mathematical feature that describes the fundamental geometric properties and allows you to determine which exceptional point will be the ‘antiparticle’ for another exceptional point,” adds Solnyshkov.

“In the conducted research, the liquid crystal layer was placed between two flat mirrors,” explains Wiktor Piecek from the Military University of Technology in Warsaw. “The whole structure creates an optical cavity, through which only light with a specific wavelength can pass.”

This condition is met for the so-called cavity resonance modes—that is, light with a certain color (energy), polarization and direction of propagation. This corresponds to a situation where a photon that falls into the cavity can bounce multiple times between the two mirrors.

The presence of a liquid crystal, the orientation of which can be changed by applying a voltage, allows the energy of the cavity modes to be tuned. In addition, the resonance condition changes when the light is incident at an angle, which in particular can lead different cavity modes to intersect with each other, i.e. have the same energy despite different polarization of the light.

For the specific orientation of the liquid crystal considered in the article, the two different cavity modes should intersect only for the four specific incidence angles of light when considering an ideal structure without any losses. In fact, the light trapped in the cavity can escape through imperfect mirrors or be scattered.

The average time the photon remains inside the microcavity can be determined on the basis of spectroscopic measurements. Moreover, due to the orientation of the liquid crystal layer, a difference was observed in the scattering of light polarized along and perpendicular to the axis of the liquid crystal. As a result, at the place of each degeneracy point for an idealized lossless cavity, a pair of so-called exceptional points were observed for which both the energy and lifetime of the photon in the cavity are the same.

Mateusz Krol, who is the first author of the publication, describes the experiment: “In the tested system it was observed that the position of exceptional points can be controlled by changing the voltage applied to the cavity. First of all, as the electric bias is reduced, the exceptional points created from different degeneracy points get closer to each other, and for a suitably low voltage, they overlap. As the approaching points have an opposite topological charge, they annihilate at the time of the encounter, so they disappear, leaving no exceptional points.”

“This type of topological singularity behavior, i.e. the annihilation of exceptional points from different degeneracy points, has been observed for the first time. Earlier work showed the annihilation of exceptional points, but they appeared and disappeared at exactly the same degeneracy points,” adds Ismael Septembre, a Ph.D. student at the CNRS.

Exceptional points have been intensively studied in many different areas of physics in recent years. “Our discovery will allow the creation of optical devices whose topological properties can be controlled by voltage,” concludes Barbara Pietka from the Faculty of Physics at the University of Warsaw.