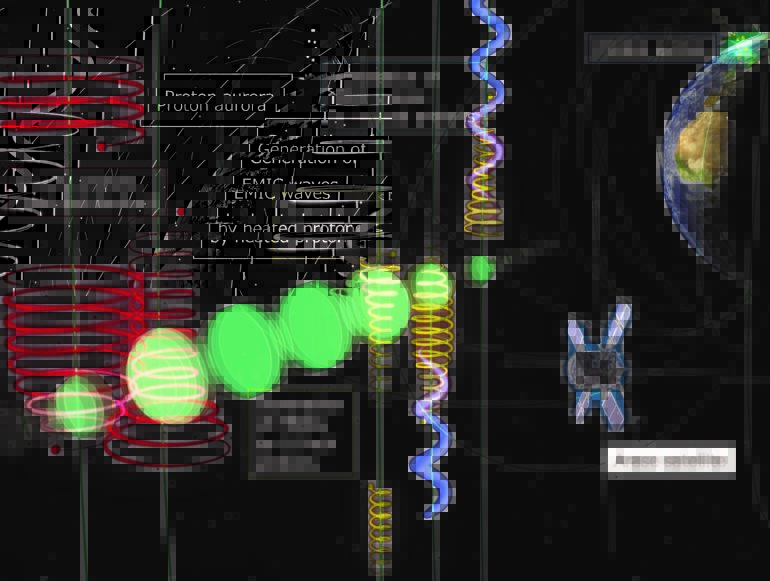 A prominent signature of plasma—a state of matter characterized by freely roaming charged particles interacting via electromagnetic forces—is the generation of “plasma waves,” resulting from an instability of plasma distributions. “Fast magnetosonic waves” (MSWs) are one kind of electromagnetic plasma wave in the geospace. MSWs result from hot protons and are considered “high frequency waves.”

Another kind of wave commonly generated in the geospace is the “electromagnetic ion cyclotron” (EMIC) wave, which is considered a “low frequency wave.” Recently, satellite observations in the geospace have shown that MSWs and EMIC waves often occur together. However, the mechanism underlying this co-occurrence has remained unclear.

Now, a team of researchers led by Professor Yoshizumi Miyoshi from Nagoya University, Japan, has somewhat unraveled this mechanism. “MSWs are known to occur together with the heating of low-energy protons and studies have shown that MSWs can heat up these ‘cold’ ions. With the recent observation data by the Arase satellite showing simultaneous EMIC waves, we wondered whether the appearance of EMIC waves is actually coupled with the MSW-mediated ion heating process,” says Prof. Miyoshi, explaining the motivation behind the study.

Accordingly, the team applied a wave-particle interaction analysis method to the MSWs and EMIC waves—which they observed with the Arase satellite—to examine the “cross-energy coupling” between them through ion heating. The results were enlightening: they found that while MSWs transferred energy to the “cold” protons to heat them up, a part of the transferred energy of protons went into exciting the EMIC waves. Considering that MSWs were, in turn, excited by hot protons, they, in fact, acted as a mediating agent for energy transfer to the EMIC waves, i.e., a cross-energy coupling between hot protons, cold protons, MSWs, and EMIC waves.

While these findings are exciting in themselves, Prof. Miyoshi explains how they are of significance to our knowledge about the geospace as well: “EMIC waves cause significant scattering and loss of ‘killer electrons’ in the Van Allen radiation belts which often cause satellite malfunctions. The new energy transfer route for exciting EMIC waves revealed in our study could contribute to improved space weather forecasting, making for safer operations of satellite in the Van Allen radiation belts.”