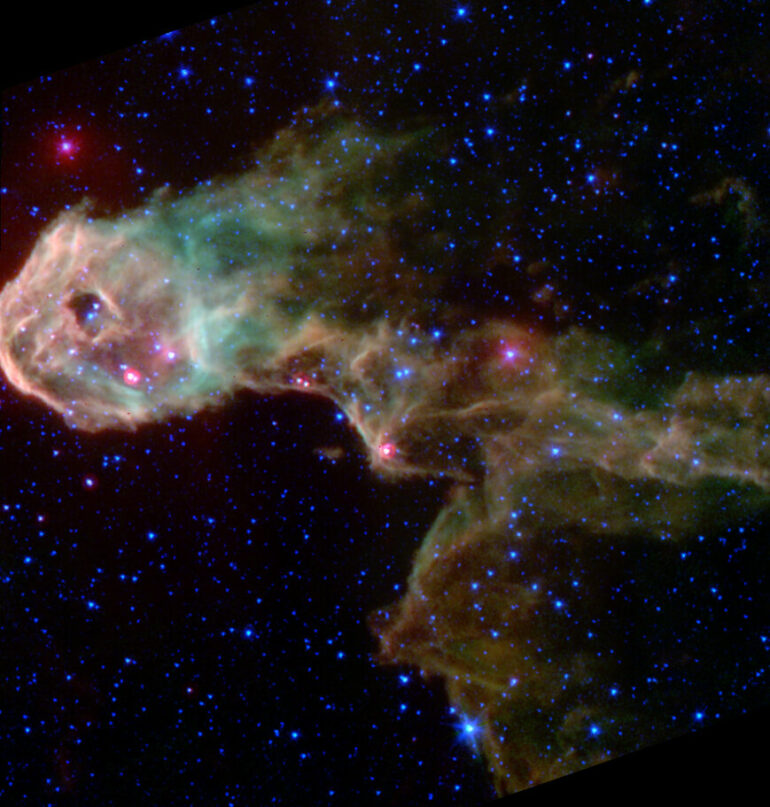 Receivers combining a superconducting hot electron bolometer (HEB) with a reference oscillator are the work horses of supra-terahertz astronomy, observing for example star formation and galaxy evolution. Until now, mainly niobium nitride HEBs—that have to be operated at low temperatures of 4 Kelvin—have been selected for space and balloon borne telescopes. A team of scientists at SRON, TU Delft, Chalmers University and RUG have now demonstrated a HEB based on magnesium diboride, a new superconducting material, which not only can simultaneously detect more spectral lines, but can also be operated around 20 Kelvin. The latter can significantly reduce the cost, weight, volume, and required electrical power of space instruments. The study is published in Applied Physics Letters.

Superconducting niobium nitride (NbN) hot electron bolometers (HEBs) are so far the most sensitive heterodyne detectors for high-resolution spectroscopy at supra-terahertz frequencies (1–6 THz). They take advantage of a local oscillator to convert a THz line into a GHz line. Within this frequency range, many atomic, ionic, and molecular spectral lines provide information about star formation in galaxies.

The heterodyne mixers have been successfully applied in the SOFIA airborne telescope, the STO2 balloon telescope and the Herschel Space Observatory. They will also fly on NASA’s GUSTO balloon telescope, to be launched in the end of 2022, and have been selected as detectors for the proposed OASIS space mission. The supra-terahertz frequency range is not accessible for any ground-based telescope because the radiation is blocked by the earth’s atmosphere.

One drawback of HEBs is their limited intermediate frequency (IF) bandwidth, which covers a limited spectral line in one measurement. Another restriction comes from the low operating temperature (around 4 Kelvin) due to their low superconducting critical temperature of 8–10 Kelvin. Cooling down to 4 Kelvin, either by using a vessel with liquid helium or a mechanical pulse tube, is suboptimal for a space observatory considering the constraints on mass, volume, electrical power and cost.

A team of scientists at SRON, TU Delft, Chalmers University and RUG, led by Jian-Rong Gao (SRON), has recently demonstrated a HEB based on a new superconducting material of magnesium diboride (MgB2). Yuner Gan, who performed measurements and data analysis at SRON, and Behnam Mirzaei, who produced the detector at TU Delft, have shown for the first time a low-noise performance of such a detector at 5.3 THz and at an operating temperature of around 20 Kelvin.

Also, Gan measured a large IF bandwidth, which is about three times larger than the bandwidth of a NbN HEB. The larger bandwidth can cover more spectral lines within one single measurement, which makes the observations more efficient and more accurate. The MgB2 thin film was developed at Chalmers University and has a superconducting critical temperature of 38.5 Kelvin.

The higher operating temperature of 20 Kelvin is particularly attractive for space applications because of the availability of the compact, low-mass, low-dissipation, and space qualified Stirling coolers. The latter can significantly reduce the cost and complexity of space instruments. Therefore, the new detectors can increase the opportunities for new space instruments and telescopes, such as an M-class far-infrared space mission recommended in ESA Voyage 2050 and a next generation of THz observatories with a number of telescopes operated as an interferometer in space.